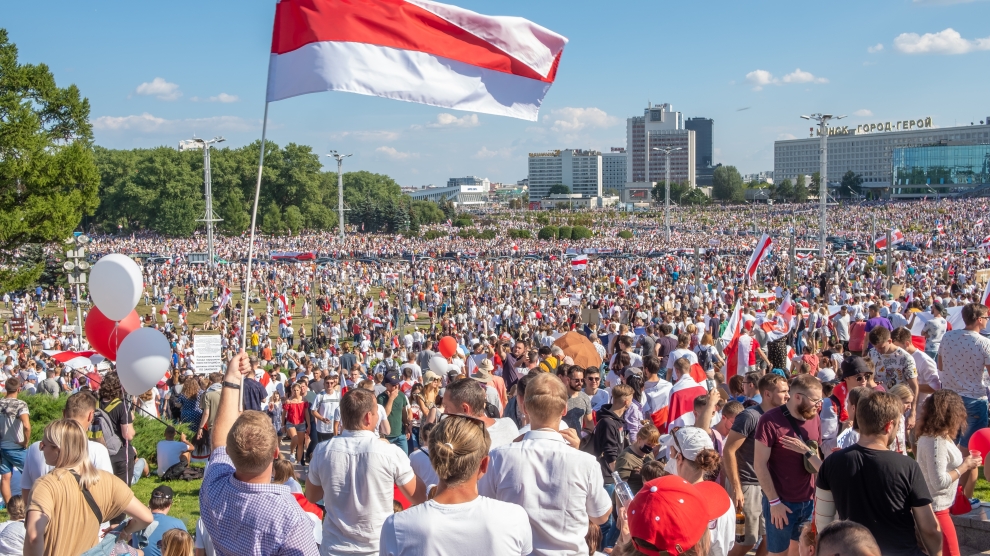 The long-standing authoritarian leader of Belarus, Alexander Lukashenko, is experiencing the most turbulent period of his presidency. After stealing another election, nationwide protests broke out across the country. During these initial outpourings of anger the regime responded with brutal force. Videos of Minsk and other cities on election night almost resembled a war zone; shock grenades were going off on the streets, people were screaming, explosions could be heard from across the city and security forces fired rubber bullets at protesters. More horrifying footage showed police beating demonstrators and torturing detainees.

Although events have been moving at fast pace in this critical period, a constant throughout has been the determination of the Belarusian people. Despite all the repression and intimidation, the protests have not died down. If anything, the repression seemed to mobilise people even further. And there are no signs of this slowing down – several weeks after election day, people are still resisting.

What makes this wave of mobilisation particularly strong is its unifying nature. People of all ages and backgrounds have come together; Workers have been striking, elderly people stand next to younger protesters, and women play a highly influential role. The unity between regions is also of importance, with little variation in the extent of mobilisation across different parts of the country and people from all over Belarus coming together to participate in acts of solidarity. The reason behind this strong level of unity is rather simple – there is no ideological goal. The protests are not pro-Russian or pro-European, they are simply anti-Lukashenko. This tactic has been effective so far and its simplicity may be the key to its success.

One key question that follows is what all these developments mean for Lukashenko and the stability of his rule. The country’s authoritarian leader was already walking on thin ice before the election, as the disconnect between Lukashenko and the people had become wider than any point before. The economy had been worsening, the regime was reluctant to implement any reforms and Lukashenko’s claim to be the linchpin of the country’s stability was wearing thin. This, followed by Lukashenko’s chaotic handling of the Covid-19 pandemic, has made this widening chasm even more apparent. At this stage, the rise of new and genuine opponents mobilised people at unprecedented levels and resulted in the beginning of the most unstable period of Lukashenko’s reign.

Things took a turn for the worse for Lukashenko after the blatantly falsified election result and the harsh repression of the protests. The public, already fed up with Lukashenko, now became outraged. The news of the authorities’ cruel response to the protests and the torturing of detainees in Akrestina prison fuelled people’s disgust of the regime, pushing onto the streets even those uninvolved in the initial demonstrations. The little legitimacy that Lukashenko had left was now irreparably damaged. As a result, the country’s authoritarian leader has found himself experiencing the most significant crisis of his time with his hold over Belarus severely weakened; even in comparison to his standing before the election. The protestors seem more determined than ever to succeed and are prepared for long-term resistance.

Of course, there is still a good chance that Lukashenko will hold onto power. Even though there have been some defections, a clear majority within the security forces and inner regime elite – the pillars on which Lukashenko’s power rests – remain loyal to him. Lukashenko also has an additional support mechanism in the form of Russia. Vladimir Putin’s initial position towards the situation in Belarus was somewhat hesitant, but he has now swung towards full-throated support for Lukashenko, and in recent days the Russian leader has stated that Russia has formed reserves of law enforcement ready to assist Lukashenko if necessary. This is not hugely surprising. There were signs of things moving in this direction, with Russian TV workers arriving in Belarus to replace striking staff, and media outlets in Russia changing their tone towards uncritical endorsement of Lukashenko.

Despite Putin’s comments however, this still does not mean that Russia will intervene directly in Belarus. This option is definitely on the table – and looking more likely than before – but this would still be an extreme act. Of course, the possibility of Lukashenko being overthrown through mass protests is worrisome for Putin. However, intervening in Belarus would be dangerous for Russia and the benefits would not, so far, outweigh the costs. Moreover, Russia has its own problems to deal with. There have been ongoing protests in the far-eastern region of Khabarovsk Krai and a rising backlash over the poisoning of opposition figure Alexei Navalny.  Also, Putin would have to take Russian public opinion into consideration before making any moves. Nevertheless, even by vocally supporting Lukashenko, Putin can still help bolster his Belarusian counterpart’s position.

How things will progress in Belarus is still unclear. Protests and other acts of solidarity could continue for months. Yet Lukashenko has shown that he has every intention of clinging onto power and making no concessions. Crackdowns have once again increased: some of the opposition Coordination Council members have been detained, the accreditation of several foreign journalists was revoked and hundreds arrested for attending protests. But still the demonstrations show no sign of abating and it seems Lukashenko has arrived at a stalemate with the people.

Lukashenko’s survival now relies on the loyalty of his security forces and the support of governing elites, along with Russian backing. His legitimacy in the eyes of the people is compromised beyond repair. If he survives, it will be solely based on these factors. If Lukashenko makes it through this period however, it would result in the strong possibility of further restrictions and strengthening repression to compensate for lost legitimacy. This would most likely entail a brutal crackdown on opponents and further limitation of dissent.

However, without legitimacy and strong discontent among the people, it is hard to envision a future for Lukashenko in the long-term. Isolated from the West, Lukashenko’s only stable ally will be Putin and Russia. Relying on Russia for survival would also mean a weakened position for Lukashenko. All this could easily pave the way for cracks within the ruling elite, or provide an opportunity for the opposition to gain strength through resistance to Russian domination. It seems like Lukashenko’s rule will be weakened regardless of what happens, and doubling down on repression will only buy him time.

Balki Bayhan researches authoritarian politics and stability with a focus on Turkey and post-Soviet countries at the Centre for Trust, Peace and Social Relations at Coventry University.

Serbia-Kosovo agreement falls far short of ending their conflict
The EU-US privacy shield has gone. Now, what about your data transfers?
Comment