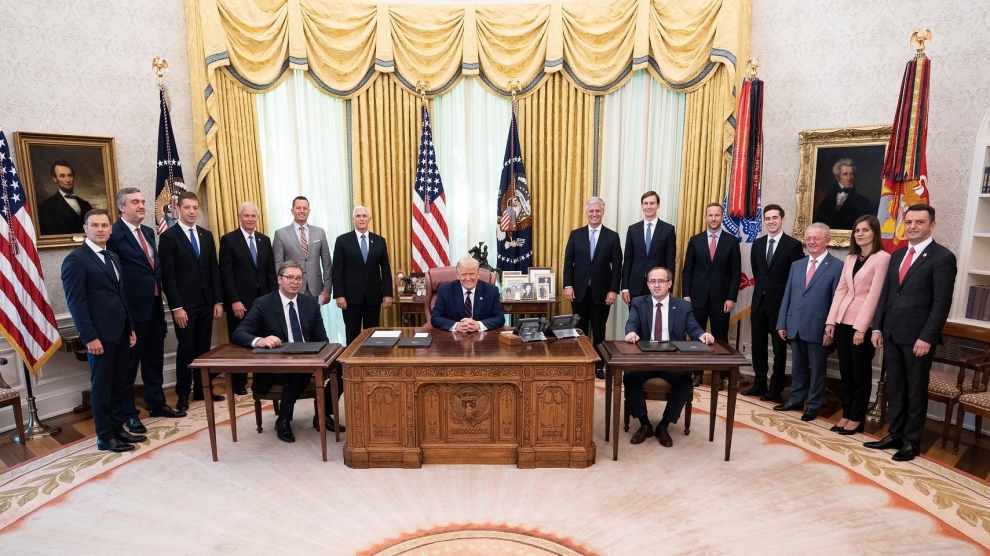 The recent agreement between Kosovo and Serbia, brokered by the US, to normalise economic relations between the two countries fell short of the needed reconciliation process that would lead to full recognition of Kosovo’s independence by Serbia. Some elements of the economic normalisation agreement are positive, including operationalising the peace highway and the rail link between Prishtina and Merdare, sharing Gazivode/Ujmani Lake and exploring its use as a reliable water and energy supply, and receiving financial support from the US International Development Finance Corporation and Export-Import Bank of the United States (EXIM) for the above. These and other projects will create job opportunities for several thousand Kosovars and alleviate some of the economic hardship in the country.

Sadly, the agreement will prove to be superficial not only because it does not require Serbia to recognise Kosovo at some point in the future, but it does not even commit Serbia to renounce, once and for all, its illegitimate de-recognition campaign against Kosovo. The fact that Serbia agreed to “refrain from formally or informally requesting any nation or international organisation not to recognise Kosovo [Prishtina] as an independent state” amounts to no more than lip service. Belgrade knows that Russia will veto any United Nations Security Council resolution to recognise Kosovo, which is the most important international body.

What is also disturbing is that there are a number of side-shows in the agreement designed to boost US President Donald Trump’s standing in his struggle for reelection that have little or nothing to do with the Serbia-Kosovo conflict. This includes mutual Israeli-Kosovo recognition, which requires Prishtina to open its embassy in Jerusalem, to which the EU sternly opposes, and agreeing to designate Hezbollah as a terrorist organization. Furthermore, apart from these sidebars, there isn’t anything in the agreement that wasn’t already in the works or fully agreed to prior to US involvement. Finally, the agreement is not a treaty; either country can walk away from it without any penalty.

Customarily, Trump is fixated on economic development as if it were a panacea that can resolve all conflicts, irrespective of history, the psychological dimension (which continues to haunt Kosovo in particular), and the prevailing adversarial political environment they have been living with and continue to embrace. The Israeli-Palestinian conflict offers one example. At an economic summit in Bahrain, it was agreed that the Palestinians would be provided with a massive economic package as a part of the process to lead to peace; however, it fell flat on its face as it ignored past and current economic relations between the two sides, and did nothing to resolve their conflict.

The conflict between Serbia and Kosovo is deeply embedded in their psyche, and as long as historic reconciliation is absent, no amount of economic normalisation will mitigate deep-seeded distrust and their fundamental demands. To end the conflict there indeed must be a process of reconciliation, and economic normalization is only one of several prerequisites for such a process to succeed.

The process of reconciliation, however, must be anchored on Serbia’s permanent renunciation of its de-recognition campaign against Kosovo. To simply suspend such a campaign for a year, as stipulated in the agreement, demonstrates Serbia’s lack of commitment to recognise Kosovo now or at any time in the future.

Kosovo’s Prime Minister Avdullah Hoti made a terrible mistake by not making this requirement a prerequisite to any agreement with Serbia. Indeed, what is the point of developing economic relations when Serbia can after one year resume its de-recognition campaign? Hoti’s failure to insist on this requirement makes a mockery of the whole agreement, which benefits Serbia economically without requiring it to make the commitment (central to reconciliation and building trust) to end its sinister campaign. Economic normalisation should be treated only as a first step in a process of reconciliation, which must be based on the following to lead to mutual recognition:

First: People and goods should be allowed to move freely across the border in both directions to increase people-to-people interactions, which will gradually help heal wounds and nurture mutual trust. Serbians who have habitually looked down on Kosovar Albanians need to reorient themselves to the new realty. Equal treatment of their neighbors is central to reconciliation, especially because Serbia is larger, more affluent, and superior to Kosovo militarily. Kosovo cannot negotiate from a position of weakness and make any significant concessions without public outrage.

Second: A free trade agreement is vital not only to expand and improve relations from which both sides can greatly benefit, but to maximise efficiency and production of items uniquely designed for export to the other. Moreover, without tariffs on all imported goods, they would become more affordable and receive greater demand. The imposition of a 100 per cent tariff on Serbian goods imported to Kosovo, which has since been lifted, offers an abject experience from which both countries should draw an instructive lesson.

Third: Serbia must admit to and accept responsibility for the war crimes it committed against Kosovo during the war in 1999. Without such an admission, no economic normalisation or any other interaction on any socio-political levels can be sustained. Serbian atrocities and the horror Kosovar Albanians endured during the war will not fade away simply because of economic normalisation. Serbia should borrow a page from Germany. Had Germany not admitted to the crimes against humanity it committed during World War II, it would have never been able to move past the horrifying, historic stain, let alone integrate into the European community and become one of the top leaders of the EU.

Fourth: EU observers must be involved in the process of “locat[ing] and identify[ing] the remains of missing person…and identifying and implementing long-term, durable solutions for refugees and internally displaced persons” as stipulated by the agreement to ensure that this lingering and painful residue of the war is addressed, which is essential to reconciliation. Serbia has been reticent in this regard in the past, fearing that the uncovering of mass graves would provide further proof that it in fact committed war crimes on a large scale. Oversight is necessary to ensure the past is uncovered and wounds can begin to heal.

Fifth: Following this process, Serbia must commit to recognise Kosovo as an independent state within three to four years, during which many of the conflicting issues should be resolved through direct negotiations. When deadlocked, the EU would mediate any disagreement, especially because both countries want to integrate into the EU. Ending their conflict with the EU’s input would help facilitate an agreement, which is a precondition to integration.

In the final analysis, Serbia must accept the irreversible reality of Kosovo as an independent state and that there is nothing it can do to change that reality. Over 110 countries have recognised Kosovo, including the US and a majority of EU member states. It is time for Belgrade to stop dreaming about Kosovo as if it still is or can be restored as one of its provinces.

Serbia, just like Kosovo however, knows well that its future security and prosperity lay with the EU. Entering into good-faith negotiations to settle their conflicts with the objective of reaching mutual recognition will open up a new horizon for both countries, where they can grow and flourish and give the new generation a hopeful future instead of remaining enslaved by the past.

Is Georgia drifting away from European integration?
Determination and unity are key to the success of the Belarus revolution
Comment