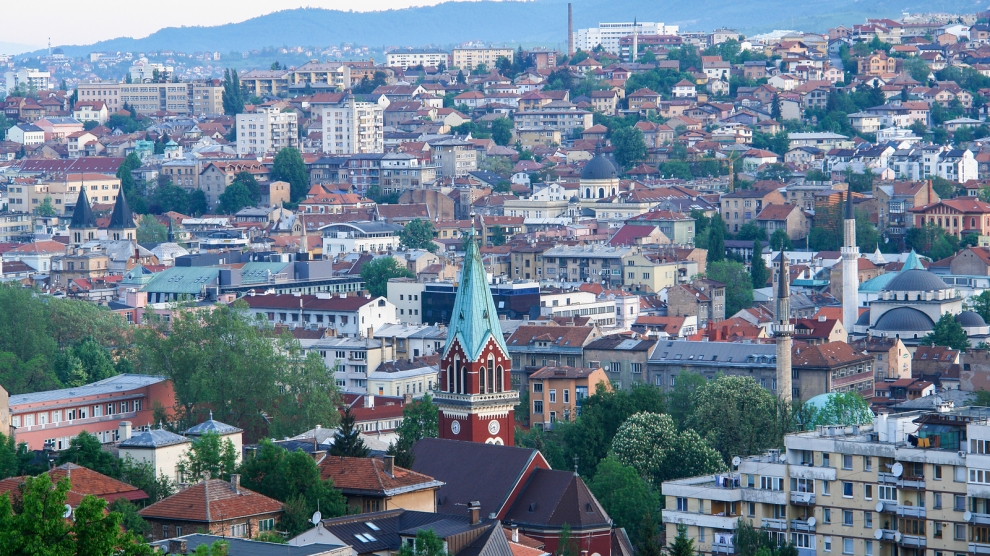 There is a groundswell in Bosnia and Herzegovina as citizens (mostly young people) are beginning to embrace a vision of hope and change in their country—a change that could lead to democracy and a brighter tomorrow for all.

The seeds of the new vision for Bosnia and Herzegovina were planted in 2018 when Mirsad Hadžikadić, a professor with more than 30 years of experience at the University of North Carolina at Charlotte and a native of the country, ran for the Bosniak presidential council seat.  Although he did not win the election, he received nearly 60,000 votes—double his most optimistic forecast. For a relatively unknown, totally underfunded, independent candidate, these results have been deemed unprecedented and historic. More important to Hadžikadić, his candidacy proved to be the “spark” for democracy with the formation of the Platform for Progress Movement, which has survived the election and is growing. People committed to change and democratic values are emerging.

Hadžikadić and his team selected November 25, 2018—Statehood Day in Bosnia and Herzegovina—as the day to hold the founding assembly for the Platform for Progress Movement.  A historic day for the movement and the country, as the movement officially announced its formation. Members were allowed to elect representatives to a supervisory board as well as the eleven-member presidential board. Members could also review and provide input and vote on the proposed movement statute and its structure.  Additionally, for the first time, the diaspora (Bosnian citizens living outside of the country) were allowed to participate directly in this process. Most notably, though, was the introduction of electronic voting for members viewing the live stream of the event. The implementation of electronic voting set a historic precedent, changing the process for country-wide elections moving forward. As one member of Hadžikadić team pointed out, “citizens were able to witness directly the democratic process.”

The founding assembly took place at Dom Mladih – Skenderija, a youth centre that is part of a large entertainment and sports complex, nestled in the heart of Sarajevo. Throngs of people arrived, patiently waiting in line to gain access to the centre. The complex’s 800 seats and any available standing spaces were quickly claimed. The building was crowded with people eager to be a part of the moment. These were citizens from Sarajevo, towns, and cities from across Bosnia and Herzegovina, dignitaries and those viewing remotely as they laid witness to and were a part of history and democracy in the making. There to embrace the vision of hope that together, change is possible in Bosnia and Herzegovina.

“When my wife Mirzeta and I arrived some 45 minutes before the event on that cool and damp day, there was a long line of people waiting to get in, standing quietly and patiently to enter the facility,” said Hadžikadić. “Bosnians are not known for standing in line quietly, often impatiently trying to get ahead of others in front of them. But, such was not the case on this day. A magical day as music resonated through the center as  people sang the national anthem, the newly written anthem of the Platform for Progress for the Movement and were allowed in person or electronically to actually participate in the political process and have their voices heard.”  Sites are now set on the 2020 local elections and the 2022 general election as Bosnia and Herzegovina, as well as the rest of the world, are witnessing democracy in the making.

Now the arduous and often tedious task of establishing the Platform for Progress Movement in Bosnia and Herzegovina continues. This includes solidifying and fine-tuning the internal structure and operation of the movement, the long process of vetting those who will represent the movement throughout the country, selecting candidates for the 2020 local elections, and establishing an organised presence in cities, towns, and municipalities across the country and neighbouring countries in Europe. All of which is necessary and vital as the world witnesses the budding of democracy in this western European country.

A major goal for the 2020 local elections is recruiting trustworthy people who will serve and represent the movement as well as scout prospective council and mayoral candidates. One of the challenges is determining which of the 140 total municipalities are the best to target for this recruitment. Hadžikadić says the objective is not quantity but quality.

“We have set a goal of ten to twenty-five mayorships in the upcoming local elections, which we feel is very doable,” said Hadžikadić. “We want to send the message that we are not afraid and within the movement create a mindset that we must work hard to accomplish our goals. Ten mayorships would be excellent; twenty-five would be marvelous. Either would show the strength of the movement and prepare it for success in the general elections in 2022.”

Establishing an organised presence of the movement has also expanded outside the borders of Bosnia and Herzegovina.  Hadžikadić has already been to Switzerland, with more visits planned to Sweden, Austria, and Germany. The objective is to start forming local organisations within the diaspora in those countries and encouraging them to become more involved with the political process in Bosnia and Herzegovina. He says the introduction of electronic voting will encourage and nurture that involvement.

“We hope that as the diaspora will become more involved with the political process not only in Bosnia and Herzegovina but also within their own countries,” said Hadžikadić. “Our aspiration is they will form lobbying groups who will then go before their government leaders using Bosnia and Herzegovina as an example of how change is possible. This will then serve as a catalyst for future talks between myself and the leaders of those countries as we strive to establish mutually beneficial relationships and collaboration moving forward.”

The need to get to the polls

Spreading this vision of hope and change both within Bosnia and Herzegovina and outside its borders also addresses a key and disturbing issue facing the country. Citizens are electing to leave in droves. Once they leave, few are returning, which will eventually create a huge economic crisis within the country. Hadžikadić says people are leaving for the very same reason that they are not coming back: the current climate within Bosnia and Herzegovina.

“People are fed up and unhappy with the current state of the country where hatred and divisiveness run rampant,” said Hadžikadić. “The nationalists are running the game, tearing the country apart, manipulating the political process. Fear is currency, and nobody can stop them.  We, the movement, must continue to share our vision that change is possible. We need those who have become so apathetic with the situation to embrace this vision that change is possible and to either remain in Bosnia and Herzegovina or to return to their homeland and help make it better by restoring the rules of law and a sense of justice.”

Hadžikadić says those who have left the country would start coming back; even it meant

receiving half the salaries they are currently receiving elsewhere in Europe if it were not for the current lack of normalcy, fear, and divisiveness.  He says this constant divisiveness makes those who have left feel that they are not welcome back. The nationalist parties thrive upon this uncertainty and breaking down those barriers can only serve as a threat to their corrupt ways.

“It is imperative that the movement continues to spread the vision that hope and change are possible but only with the participation of everyone,” said Hadžikadić.  “For this to become a reality, we must emphasise the need to bear the responsibility of getting involved and contributing. Pointing the blame at others is no longer acceptable. Citizens in Bosnia and Herzegovina and the diaspora need to get to the polls. They need to help change the way elections are being done.  Pushing for electronic voting will help streamline the entire voting process, helping to mitigate the cumbersome nature of the process and eliminate the current fears by some to freely vote their conscience. Once they begin to embrace the message and begin to see the ‘light at the end of the tunnel,’ they will return.”

Cities, not governments, are the new laboratories of public policy
Labelling those who do not agree with migration as racist is unhelpful
Comment