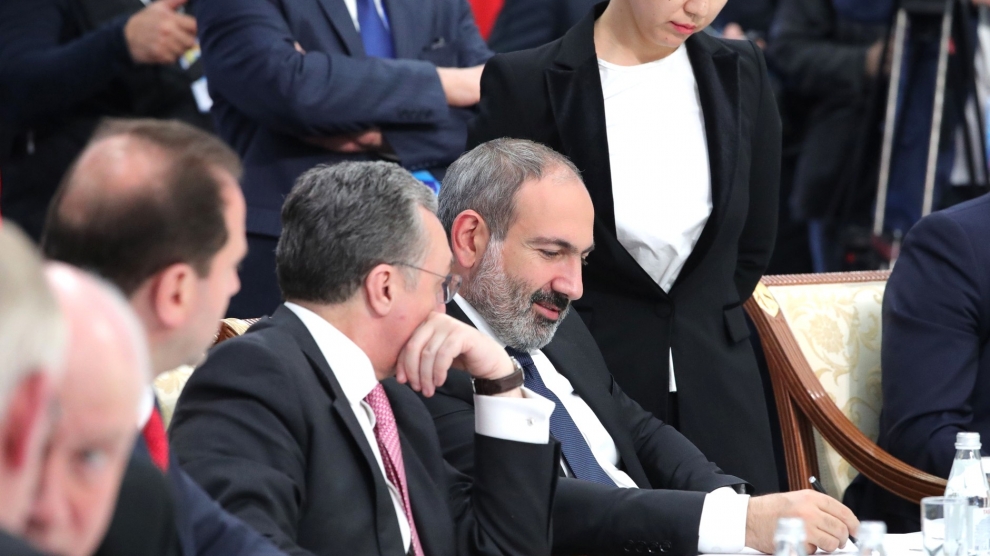 The question of whether the 2014 Maidan Revolution in Ukraine and the 2018 Velvet Revolution in Armenia produced significant reforms, goes into determining their implications for the fight against endemic corruption in these two post-Soviet countries. For former Soviet Union countries, corruption has represented a significant challenge, undermining their process of democratic consolidation. Not surprisingly, anti-corruption reforms have been put at the heart of post-revolution state-building in both countries.

However, the effectiveness of these institutions has been questioned by several observers, pointing to the insufficiency of anti-corruption measures amidst unrelenting efforts by power groups to retain their outsized influence over law enforcement and justice. In essence, Poroshenko’s steady decline as a political powerhouse was significantly linked to his failure to eradicate corruption.

Meanwhile, the promises of Volodymyr Zelensky to defeat rampant corruption resonated with Ukrainians, who placed a great deal of faith in his ‘game-changing’ agenda. Zelensky easily defeated Poroshenko in last year’s presidential election.

Since the election, Ukraine’s parliament, the Rada, has adopted important pieces of anti-corruption legislation, including the removal of immunity from prosecution for MPs and a proposal to provide the NABU with the right to undertake autonomous surveillance.

Moreover, Zelensky’s anti-corruption efforts have resulted in the investigation and subsequent arrest of some of President Poroshenko’s associates, including Oleg Hladkovsky, a top defence official; a People’s Front party MP and the former head of the Rada’s defence committee Serhii Pashinsky; ex-deputy minister for the occupied territories Yuri Hrymchak; and Poroshenko Bloc MP Yaroslav Dubnevych.

Similarly, the post-revolution government in Armenia led by Nikol Pashinyan (pictured above) criminalised illicit enrichment and intensified its anti-corruption campaign.

The government pushed for a series of high-profile trials against former senior officials, most notably the ex-president  Robert Kocharyan, former high-ranking officials Manvel Grigoryan, Aram Harutyunyan, Seyran Ohanyan and others. This extended to former defence minister and outstanding former ruling Republican party member, Vigen Sargsyan, who was charged with “abuse of power,” as well as to former chief of police Alik Sargsyan – charged with covering up an illegal post-election crackdown on opposition protesters in Yerevan in 2008 and with destroying evidence of the “overthrow of the constitutional order” led by then President Kocharyan.

However, these arrests and investigations have not yet led to court rulings. Essentially, both Pashinyan’s and Zelensky’s fight against corruption has so far focused on punishing members or associates of previous governments. The question remains if the anti-corruption measures will move beyond selective prosecution of former officials to the unequivocal application of the “zero tolerance for corruption” principle.

This, in turn comes down to the furtherance of democratic reforms, leading to the advancement of good governance practices and eradication of systemic corruption in both countries. Some critics have been sceptical about the effectiveness of anti-corruption reforms in both countries, positing that while governments embark on “crowd-pleasing affairs,” much needs to be done to address the more systemic problems that the new governments inherited.

Both Zelensky and Pashinyan have placed a special emphasis on defeating judicial corruption.

As such, in autumn 2019, President Zelensky embarked on a series of judicial reforms. He dismissed the High Qualification Council of Judges (the body responsible for attestation and selection of judges), announced plans to reload the Higher Council of Judges (the highest self-governing body of judges) and halved the number of Supreme Court judges. Remarkably, while the Venice Commission, an advisory body of the Council of Europe, praised Zelensky’s government’s judicial reform, it expressed concern over certain aspects of the reform, pertaining to “important issues of the rule of law” in Ukraine. The Commission criticised the fact that politicians appear to now have the power to determine whether sitting judges remain in their posts or not.

Similarly, judicial corruption is one of the most serious challenges facing Pashinyan’s government.

Following the controversial release of former president Kocharyan in May 2019, Pashinyan contended that the judiciary is a remnant of the former corrupt system which would cook up conspiracies against the Armenian people.

As a result, he called for a mandatory “vetting” of all judges on all the courts in the country because of their ties to the previous regime. The tension between Pashinyan’s government and the “remnants” of the former regime reached a point where the Armenian parliament adopted a bill on holding a referendum on suspending the powers of a majority of members of the Constitutional Court.

Pashinyan sees the current Constitutional Court as an impediment to completing the revolution in Armenia. More specifically, it was regarded as an instrument that prevented the people from exercising their right to form a government in the country in the 1996, 1998, 2003, 2008, 2013 presidential elections. Notably, PACE co-rapporteurs for the monitoring of Armenia called on Armenian political players to refrain from actions and statements that could be perceived as exerting pressure on the judiciary. Essentially, Pashinyan threw his weight behind changing the Constitutional Court, contending that the latter represents the corrupt regime of Serzh Sargsyan, rather than the people of Armenia. Furthermore, he regarded the opponents of the referendum as “anti-state” forces.

Overall, judicial reform remains a big challenge in both countries, as its success is critical to breaking with authoritarian legacies.

Based on the comparative analysis of anti-corruption strategies in developing countries, there are three main observations to make regarding Ukraine’s and Armenia’s trajectories.

A major impediment to democratic state building, including the fight against corruption in Armenia and Ukraine, is related to prevailing post-Soviet “informality”. The use of informal networks and connections in the exchange of favours, gift-giving along with other informal activities have been been deeply ingrained in both Ukrainian and Armenian societies. Therefore, the state apparatus, as well as education, healthcare, judiciary and law enforcement have long been dominated by informality.

As such, quite often the institutions that have been set up to fight corruption run up against deeply entrenched habits of graft in society and politics. Even though it would be an oversimplification to contend that Armenian and Ukrainian societies are congenitally hooked on graft as a way of life, the “culture of corruption” will not disappear overnight.

Studies show that Ukrainian citizens tend to “condemn” high-level corruption” yet “regard petty corruption as a justifiable evil”. As a matter of fact, countries with long histories of informal illiberal practices and corruption often face tremendous challenges in eradicating these blights . Therefore eradicating the culture of corruption and informality should be an urgent priority on the reform agendas of new Ukrainian and Armenian governments.

Second, one of the biggest challenges of anti-corruption reforms in developing and particularly transitional countries is the persistence and prevalence of corrupt practices by political and economic elites. More specifically, the residual influence of oligarchy presents a threats to the fight against systemic corruption. Clearly, the political elite’s robust commitment to eradicating systemic corruption is indispensable. Meanwhile, inconsistencies and the weakness of a commitment lead to a situation, under the banner of “zero tolerance for corruption” governments keep playing a “tolerant corruption” game. Although political will may not be sufficient, it is a necessary condition to defeat corruption. The case of Romania demonstrates that the political will to defeat corruption may well make up the absence of a tradition of the rule of law and democracy. More specifically, European Union pressure, along with the electoral pressure and the political will of the domestic political elite combined to ensure the establishment of the rule of law and defeating corruption in the Romanian judiciary .

Third, external factors including the anti-corruption programmes of international donors have proved conducive to the fight against corruption. While Ukraine’s choice for Europe and fervent desire to irreversibly depart from the orbit of Russian influence is a crucial impetus to defeat corruption, Armenia’s centrality in the Russia-led socio-political order has remained intact. Nevertheless, Pashinyan’s government’s anti-corruption efforts prompt us to posit that international efforts may well resonate with prevalent social norms in Armenia. The question remains, however, if the legitimacy of the anti-corruption norms promoted particularly by the European Union will lead to their smooth implementation in Ukraine and Armenia.

Last but not least, the lessons from the successful anti-corruption crusades of Singapore and Hong Kong show the need for anti-corruption reform initiatives to be participatory and inclusive of all stakeholders, including the public and private sectors as well as civil society.

It is therefore absolutely essential for Armenian and Ukrainian civil society organisations to further develop institutional and professional capacity to contribute to anti-corruption reforms and influence their implementation.

Overall, the grounds for cautious optimism need to be reinforced to ensure that systemic corruption will no longer undermine democratic state-building in both countries.

The EU & The Western Balkans: Love lost in the time of coronavirus
Turkish women engineering a better world
Comment