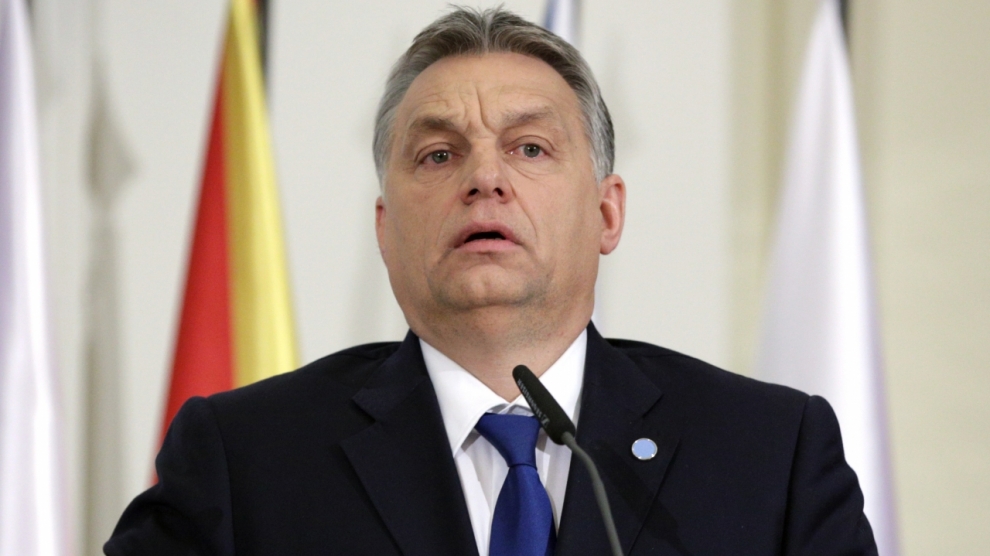 According to Viktor Orbán the V4 is “as strong as never”. Orbán considers the strengthening of this group as the most important event in recent times. Is this really so? Is V4 really strong? Does it even exist at all?

Orbán claims the V4 that unites “romantic Hungarians, enthusiastic Poles, rational Czechs and moderate Slovaks” not only exists, but, thanks to the ideals it spreads, it is becoming the bearer of all of Europe’s future. Let’s take a close look at its existence and then let’s consider its ideals and future.

Practically straight after the fall of the Iron Curtain, in 1989, Foreign Affairs magazine published an article by Zbigniew Brzezinski about Post-Communist Nationalism. In his article the former national security advisor to the US president warned of the danger of an eruption of nationalism in the Soviet Bloc’s falling apart: “While Marx characterised the tsar Russia as a prison of nations and Stalin made it a cemetery of nations, under Gorbachev the Soviet Empire is quickly becoming a volcano of nations.”

While Western Europe progressed in cooperation, from the Marshall plan through European Coal and the Steel Community to the establishment of the European Union, there was nothing similar in Eastern Europe. The Council for Mutual Economic Assistance (RVHP) was not a tool of international cooperation, but rather a tool of Soviet control and it often even prevented such cooperation (no mutual advice, no economic assistance).

That is exactly why Brzezinski proposed supporting closer cooperation between the states of Eastern Europe. He mentioned Slovenia and Croatia, Austria and Hungary, but mainly gave Poland and Czechoslovakia as concrete examples. He referred to a close cooperation between Poland and Czechoslovakia, which could eventually have the character of a confederation, as an economically and politically stabilising element of Central Europe.

A similar idea was also promoted by Václav Havel, who already called for such cooperation, in January 1990, in his speech in Polish Sejm, where he proposed to also involve Hungary. The objective of such cooperation should have been not only mutual solidarity in applying for acceptance into various western structures, but also a sensible fulfilment of the geopolitical vacuum, which appeared in Central Europe after the fall of the Habsburg Monarchy. Havel’s vision was a transformation of Central Europe, from a historical and spiritual phenomenon into a political phenomenon.

A year later, the Visegrád Group or V3 was established, at a meeting of the prime minister of Hungary, Jozef Antal,; the Czechoslovak president, Václav Havel, and the Polish president, Lech Walesa. The name was a symbolic selection. It was at Visegrád, in 1335, that a meeting was held between the Hungarian Empire’s king, Charles Robert of Anjou, the Czech king, John of Luxembourg and the Polish king, Casimir III. At this meeting the monarchs settled some of their disputes and made new agreements.

In 1992, Czechoslovakia transformed into the Czech Republic  and Slovakia, and the V3 became V4. It was a significant change, because if there was ever an opportunity for Visegrád to become a real political group, Mečiar’s Slovakia buried this chance completely for the next six years. The joint proceeding of the V4 countries, for example when Poland, Hungary and the Czech Republic received invitations to join NATO in 1997, but Slovakia did not — would be fully against all basic strategic and civilisational interests of whole region.

Slovakia eventually became a member of NATO, but only in 2004, five years after the other three countries of the Visegrád Four. In the same year all four countries also joined the European Union and it could have looked as if the V4 had finally become something real. But it was no longer needed. The European Union completely saturated the need for integration into a bigger transnational group, on its own. And as for any closer institutional cooperation within Central Europe, there was never an adequate will and probably no motivation.

Naturally, this does not mean that there is no space for such cooperation. It only means that if such space exists, we willingly do not use it. Let’s take the example of energies. It is not only strategically very significant, but also economically — a very interesting area. The European Union tries to support better connection between the energy networks of the individual states, and even wants to contribute directly to building such connections. This is because the EU sees potential for cheaper energy and increased security. Are the countries of V4 trying to cooperate in this framework? No. They do make much effort within this framework. The reasons are political, and even if these vary between countries, they have something in common: the particular interests of the individual governments prevail and push away and interest in anything as chimeric as V4.

When it comes to electric energy, only the historically agreed cooperation with the Czech Republic works. We are going to build a more significant connection with Hungary, but only after long years of shuffling at one place. Why have we shuffled? Because this connection will result in a decrease in the prices of electric energy, in at least one country (in this case in Hungary). Even though a lower price seems like a good thing, it does not have to be good for everyone. For example, the oligarchs lose their profits. Oligarchs do not like it and they always know where to push, to avoid that political decisions threaten their profits for no reason. A strengthening of the electric connection to Poland faces another problem. After the completion of the construction of a nuclear power plant in Mochovce, any relatively cheap and under-used Slovak electric energy could threaten the profitability of the Polish thermal and coal power plants. This is politically a very sensitive issue. V4 here, V4 there, charity begins at home.

What about cooperation in the area of piped gas? The EU also provides contributions to build infrastructure here, mainly in the north-southern direction, which could help connect the Baltic harbours to the Adriatic Sea. This also involves the (already built) connection between Slovakia and Hungary, which has no gas in it (both countries are buying it from Russia), and the planned connection of Slovakia to Poland, which is similarly not interesting economically at the moment. These then, can be seen as some kind of long-term strategic investment for the EU, rather than cooperation within V4, above standard. As well as this, the V4 countries are fighting amongst each other for the future profits from transporting gas to Ukraine.

If Russia bypasses Ukraine in its distribution of gas to Europe and simultaneously stops providing gas to Ukraine at the market price, gas will need to come to Ukraine from Europe. This will be through Slovakia, or through Poland. Hungary also has an opportunity to play their role in the gas game – through the so-called second branch of Turkish Stream (the first branch, which is already being built, is supposed to run from Russia to Turkey, and the second branch would run from Turkey to Europe). This second branch could be used to transfer Russian gas to Austria and further on through Hungary. However, the more gas that goes through Hungary, the less will go through Slovakia or the Czech Republic. Thus, in the area of gas, too, it is something of a fight for the biggest piece of cake, within the framework of V4. In fact, it is more of a fight for the biggest communal cake.

Then, what are we strong at?

If V4 is as strong as Orbán claims, then where is this strength? It relies on — and no one illustrates it better than Orbán — strong words. There is no V4, with a real political life, in reality. There is something called Central Europe, but that is not the same as the other cultural-historical-geographical groups within Europe. Benelux, Scandinavia or the Baltic States are not only seen as natural groups from outside, but also from the inside. Their common citizens there feel a sense of belonging, not only to their state but also to this bigger group. In contradiction, Central-Europeanism does not exist among ordinary people, as a shared feeling.

What do the strong words of the weak or non-existing group rely on? If we reduce it to the absolute basics, then it is on rejecting of immigrant quotas proposed by the European Union. In this particular question the Central European countries, coincidentally, have the same attitude. This agreement is presented as the power of V4. Orbán does not stop there: “For 27 whole years, we, in the Central Europe, have believed that our future is Europe, but now we feel that we alone are the future of Europe.”

The worst thing about these words is the fact that they may be true. In times when Europe and the whole world stand in front of very complex and urgent questions; in times when many things that were previously considered simple and clear need to be re-thought, in times when Central Europe comes with the clearly declared philosophy of being a back-seat passenger. At the core of this philosophy lies an asymmetric understanding of solidarity, which we consider right only when the solidarity is with us, but not when it is requested from us. In addition, we have a weird understanding of the responsibility we require, mainly from those who want to take a ride with us. Even though we declare it openly (mainly here in Central Europe), the rest of the continent is not unfamiliar with this philosophy.

How is, for example, with the EU’s ability to defend itself? ‘Aren’t we crucially dependent on NATO for this? However, within NATO, we still act like a back-seat passenger to the US? What can the EU do, when it has to rely only on itself in life-threatening questions? This is sadly illustrated by the refugee crisis again, and by our not-really-responsible (in)ability to protect our borders.

So, all in all: it is truly possible that, today, Central Europe is the harbinger of values that Western Europe leans towards? In reality these are not values of virtue and a future cannot be built upon them. Neither is this a reason for joy or pride.

The article was originally published by Slovak .týždeň. It has been translated and reprinted with permission.

Martin Mojžiš is an associate professor of physics at the Comenius University in Bratislava and also an editor of .týždeň magazine. In this magazine he writes about a wide range of themes, from science, through sport and literature, to politics and important matters. His popular science articles from .týždeň magazine were published as books (so far three books have been published and a fourth is ready for publication).