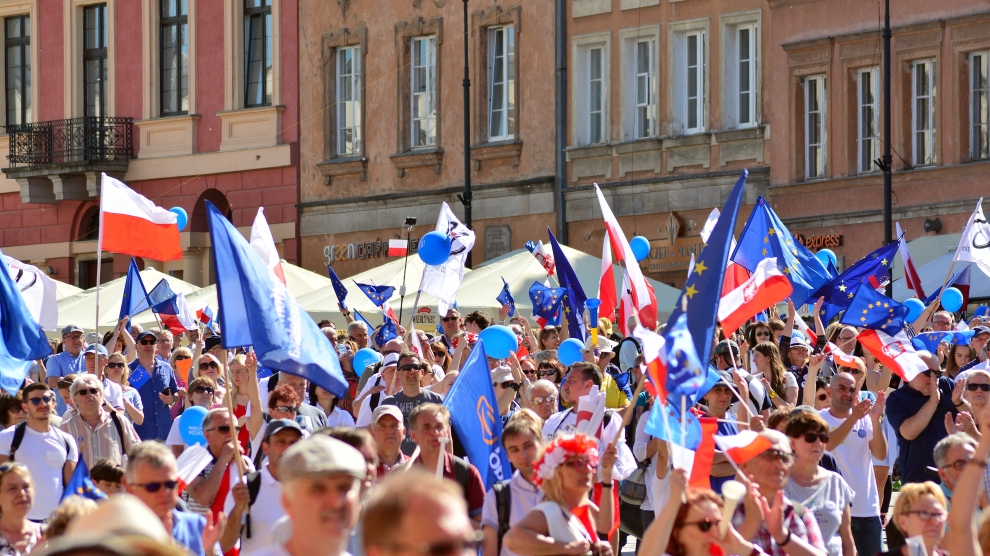 Thirty years after the fall of the Berlin Wall, the joy that greeted the rejuvenation of democracy in Central and Eastern Europe has dissipated to a considerable degree.

The region is confronted with great challenges that sometimes make the promise of democracy seem like a mirage. Over time, regimes such as those in Poland, Hungary, Serbia, and Bulgaria have taken action to curtail the civic space, undermine checks and balances, or concentrate power in the hands of a few.

Aspiring authoritarian leaders and populist politicians are encouraged by the divisive politics within the region’s mainstream parties. Inspired by role models such as Russian President Vladimir Putin or Turkish President Recep Tayyip Erdogan, they feel emboldened to carry out blatant attacks on civil liberties.

Democracy’s expansion and the accompanying enthusiasm of the 1990s was followed by a more sober assessment of its dividends in the 2000s.

Now, following the end of the third decade since the fall of communism, scepticism has set in and political leaders openly talk about preferences for more illiberal forms of democracy.

Political regimes from Poland to Hungary, from the Czech Republic to Serbia, Romania and Bulgaria, have retreated from the liberal notion of democracy by branding them as Western impositions. In doing so, they have stripped democracy of its many constitutive attributes in favour of a more minimalistic version, built around the act of free and fair elections.

However, this means that those same regimes are using election results as a carte blanche to exert uninhibited power without too many cumbersome layers of checks and balances. And in the process, they tend to assault the judiciary, weaken parliamentary oversight, interfere in independent media, and stifle civil society and freedom of expression. As a result, although the region of Central and Eastern Europe remains democratic, the past decade has not brought significant advancements in the quality of democracy.

Instead, the phenomenon of democratic backsliding has been chipping away at the region as a constant reminder of a creeping authoritarianism and populism.

Civil and political liberties: A luxury we can do without?

The 2019 report The Global State of Democracy: Addressing the Ills, Reviving the Promise from the International Institute for Democracy and Electoral Assistance (International IDEA), dedicates a chapter to the state of democracy in Europe. It provides a health-check on current democratic trends in Central and Eastern Europe.

The analysis finds that more than half of democracies in Europe suffer from democratic erosion. Even more worrisome is that six out of 10 democracies in the world currently experiencing democratic backsliding are in Central and Eastern Europe (Hungary, Poland, Romania, Serbia, and to a lesser extent, Ukraine), and Turkey. Democratic backsliding here is defined as the intentional weakening of checks on government and civil liberties by democratically elected governments.

The data from International IDEA shows that the governments of the above countries have been intentionally curtailing parliamentary oversight and the independence of the judiciary as a way to accumulate more power for the executive. Furthermore, they have taken steps to limit freedom of speech and freedom of expression and are stifling civil society’s room for manoeuvre. 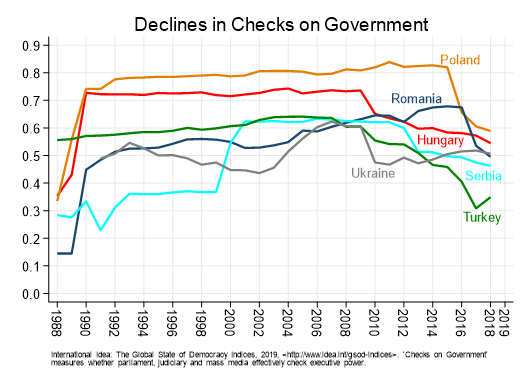 As the government’s themselves see it, such actions are taken to expedite government procedure, without the hassle of an active opposition. Liberal notions such as freedom of speech, freedom of expression and freedom of association, on the other hand, are construed as foreign implants whose real aim is to frustrate the business of daily governance. This dangerous trajectory which shows all the signs of democratic backsliding is one of the main reasons why the quality of democracy has stagnated in the last decade in Europe.

Nevertheless, democratic backsliding may not necessarily end in an authoritarian political regime. Democratic legitimacy continues to be a requirement and constraint of incumbents seeking to monopolise power. However, weakened checks and balances harm the substance of democracy: they enable incumbent governments to avoid public blame for policy failures, sustain unsubstantiated performance claims, and practice exclusionary decision-making. Moreover, unchecked executives can appropriate state resources for partisan or private purposes and expand informal patronage networks of loyalists to penetrate society.

The answer is, and should continue to be, the people

How can democratic backsliding be reversed? At times of political uncertainty and social polarisation, when some governments do not necessarily seem to be bulwarks of liberal democracy, who do we turn to? What is the remedy that will most effectively fight the democratic malaise?

The answer is the people.

However, there is a problem with this solution. Suggesting that the people will reawaken the liberal values of democracy tends to ignore the fact that it is the people who voted for the same political leaders who are putting at risk those liberal values.

Therefore, the question that ought to be explored is why people are voting for those leaders that end up eroding liberal values in the first place? In other words, relying on “the people” as a panacea for all societal ills, without understanding the underlying causes of democratic backsliding and authoritarian encroachment, tends to become a rather a lazy solution offered by opinion-formers to solve problems which are more complex and require deeper dissection.

At the same time however, people are indeed the solution. A formula for more equitable representation, more accountability and transparency, and more emphasis on the liberal tenets of democracy, lies with the people.

However, we should also recognise that mainstream political parties are to a large degree responsible for losing electoral support as they have not been sufficiently attentive and responsive to the concerns of all citizens. These parties need to renew their engagement with their electorates. Decentralised and inclusive deliberation and decision-making within these parties is one way to bring people back onside.

Party leaders and party representatives holding public office also need to revise public policies that meet citizens’ expectations. In particular, policies should reach out to those groups of society that have felt excluded from decision-making and from the fruits of economic development. Responsive policies are not tantamount to myopic spending or fiscal irresponsibility. Policy trade-offs and cost-benefit considerations can be explained to citizens, so as to ensure a sound knowledge basis for informed choices. Political elites should engage in rational, problem-solving dialogues with citizens. These public consultations should be guarded by procedural and institutional arrangements preventing misinformation or demagoguery.

When such actions are undertaken by politicians and mainstream political parties, the people’s choice will be clearer. Establishing appreciative, considerate dialogue between political representatives and citizens is a strategy that can revive the trust of citizens in political institutions.

By contrast, populist politicians usually substitute meaningful dialogue with fictitious claims about understanding the will of “the ordinary people”. Electoral majorities are then re-interpreted as popular mandates to ignore and erode institutional checks and balances, promising policies that will serve “the people” directly.

To address populist challengers, supporters of democracy need to expose these tactics. Only then can they light a path towards a more responsive democracy with stronger institutions that uphold the checks and balances that ensure democratic accountability.

Turkish women engineering a better world
Companies are willing to outsource their back office operations. Why not the sales force?
Comment