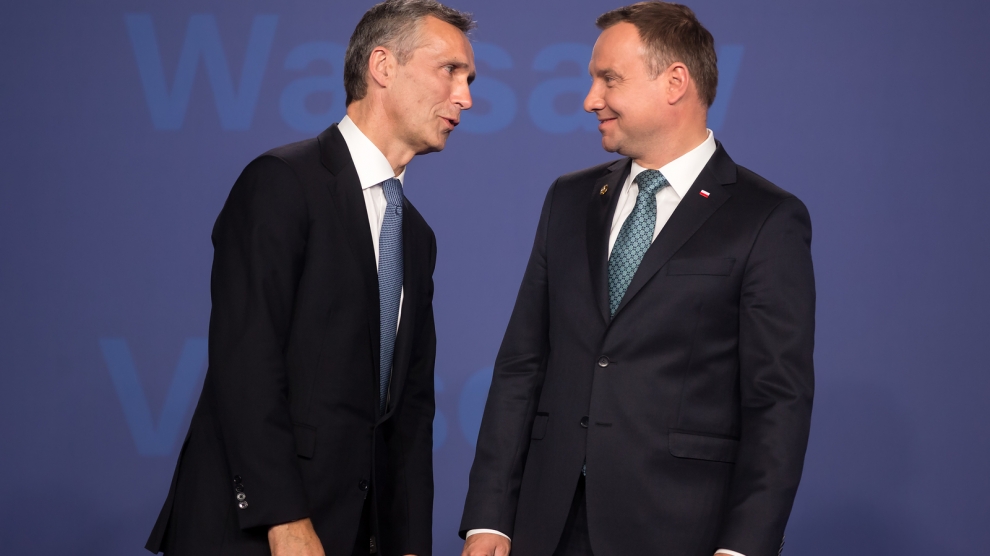 “The journey of a thousand miles begins with a single step”. The words attributed to Chinese philosopher Lao Tzu, which at least have the merit of being as self-evidently true as they are simple, and of universal application. Thus, may the decision announced by NATO on Saturday about storing military equipment here be seen as the potential first step towards a permanent US base in Poland, or merely an unrelated happy coincidence?

On March 23, NATO confirmed that it plans to establish a storage facility in Poland for US military equipment. The facility, which will cost 260 million US dollars and be located in Powidz, some 200 kilometres west of Warsaw, will house armoured vehicles, ammunition and weapons for a brigade. As reported by the Wall Street Journal, the NATO secretary general, Jens Stoltenberg, said that work on the site will begin this summer and take two years to complete.

Stoltenberg said that the storage facility would help “underpin the increased U.S. presence in Poland.” Poland has been lobbying hard for a greater US military presence in the country beyond the 5,000 American troops that are already stationed here on a rotational basis as part of NATO operations, with the suggestion that a permanent base be created – for which Poland has offered to pay – dubbed “Fort Trump”, doubtless as a way of appealing to the current US president’s ego.

Secretary General Stoltenberg also said NATO will complete some 250 other infrastructure projects across Europe by 2021 which are designed to increase the capacity of airports, harbours, railways, and roads to handle heavy equipment. These are all part of NATO’s stepping up its defences in the face of increased Russian assertiveness, especially increasing defences along the eastern flank in response to Russia’s annexing of Crimea in 2014 and its role in the continuing conflict in Ukraine.

Since then, battlegroups have been deployed on a rotating basis in the three Baltic states and Poland and NATO has launched an overhaul of its command structure and is working to improve the speed at which it is able to move troops and equipment around Europe in case of incursion. This practice of pre-positioning equipment in strategic locations is also designed make it easier to deploy resources quickly in a crisis.

Maintaining close military and other ties with the US, going beyond NATO membership, is a key element of Poland’s foreign and security policy. Last month Poland agreed to buy American mobile rocket launchers worth $414 million, and a year ago signed a 4.75 billion US dollar contract for the US-made Patriot anti-missile system.

Another long-running issue, and a reason for staying close to the US, is that of Poland’s becoming part of the US Visa Waiver Programme. The US ambassador to Warsaw, Georgette Mosbacher, in an interview with Polsat News on March 28, said she was working to make Poland part of the US Visa Waiver Programme by the time she leaves her post in Warsaw, if not by the end of this year. During a visit to Warsaw last month, US State Secretary Mike Pompeo said he hoped visa requirements for Poles traveling to the US would be revoked “soon.” “There are a set of requirements that we have in place. Poland is getting closer and closer”, Pompeo said.

The threshold for a country to enter the US Visa Waiver Programme is a three per cent application refusal rate. According to the US State Department, American consulates in Warsaw and Kraków in 2017 rejected 5.9 per cent of visa applications submitted by Poles, up from a record low of 5.37 per cent in 2016. Poland, Romania, Bulgaria, Cyprus and Croatia are the only EU member states not included in the US Visa Waiver Programme.

It is hard to see any Polish government pursuing a different policy. Unyielding the US may appear, especially on the visa issue, and however small the rewards to date for Poland’s unceasing support of the US, including taking part in military operations in the Middle east, there is for Poland little realistic alternative, from a security point of view, of staying close to the US. Not every member of NATO is as committed to meeting its obligations as Poland. Given its geography and history, this “NATO plus” approach seems sensible and realistic as, step-by-step, Poland seeks to achieve long-term security.

Talent and culture continue to hold back change
What does Moldova’s inconclusive election mean for the country’s future?
Comment