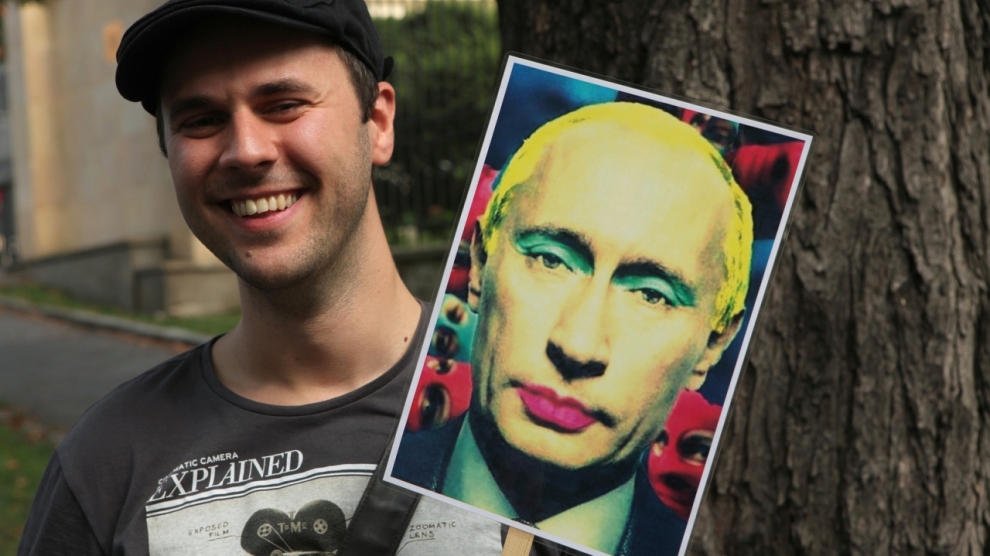 In April, news broke of a widespread anti-gay purge in Chechnya; in September, gay men and transgender women were rounded up in Azerbaijan; and in October reports emerged that a registry of gay men and lesbians was being compiled by the authorities in Tajikistan. How might we understand these disparate events as part of a trend in these three former Soviet countries?

The rhetoric of regional leaders and their modus operandi show that these events are linked by a discourse on so-called traditional values that situates lesbian, gay, bisexual and transgender (LGBT) people as the aberrant ‘other.’  The idea of a timeless, unchanging tradition is particularly powerful in these times of social uncertainty, political instability, and economic pressure.

This chain of events began in earnest in 2013 with Russia’s federal propaganda law, banning the “promotion of non-traditional sexual relations to minors.”  The law had a chilling effect on freedom of expression. Violence with impunity against LGBT people in Russia spiked.  The propaganda law doesn’t ban sexual relations between members of the same sex. Rather it targets all media and public activities which ”try to portray homosexuality as normal behaviour.”

Similar propaganda-style legislation has been discussed in Armenia, Belarus, Kazakhstan, Kyrgyzstan, Latvia, Lithuania, Moldova and Ukraine, leading to an increase in public discourse on traditional values as a way to sabotage the rights of LGBT people throughout the region. The echoes of traditional values rhetoric can of course be heard much further afield including in Egypt, Indonesia, Nigeria, and Uganda.  Russia is not directly responsible for this proliferation of laws outlawing the promotion of homosexuality, or for the renewed zeal for using existing morality laws against LGBT people, such as in Egypt. But Russia has positioned itself as the champion of traditional values, both domestically and internationally.

Russia and Egypt have long led the charge against the advance of the rights of LGBT people at the United Nations, focusing their efforts on traditional values and family values and opposing any mention of sexual orientation, gender identity, or even gender.

Traditional Values is the staple language of Russia’s alliance with countries from the Organization of Islamic Conference (OIC) and the Africa Group at the United Nations.  The rights of LGBT people are the wedge issue used to undermine the universality of human rights and to position Russia in opposition to the West on the global stage.

Russia’s foreign minister, Sergei Lavrov, used this approach in a speech to the UN Human Rights Council in March 2014:  “A number of countries have recently seen a sudden and sometimes rather aggressive rise in the activities of those who support ultra-liberal ideas, advocating permissiveness and hedonism and demanding a revision of norms of morality and ethics shared by all world religions.” Lavrov articulated a powerful rhetorical divide in which the world is split between decadent modernity and wholesome tradition. It has served its purpose well, as a clever shorthand against human rights.

It is in this geopolitical context that the words and actions of leaders in Azerbaijan, Tajikistan, and Chechnya, a region within Russia, need to be understood.

‘In Chechnya, There Are No Gays’

In April, news broke that security forces in Chechnya had been systematically rounding up gay men, torturing them, forcing them to reveal the names of others, and finally releasing them beaten and bruised to their families in a shaming ritual that encouraged so-called honour-killings.

This is what Alvi Karimov, spokesperson for Chechnya’s strongman, Ramzan Kadyrov, had to say at the time: “If there were such people [gays] in Chechnya, law enforcement agencies wouldn’t need to have anything to do with them because their relatives would send them somewhere from which there is no returning.” In other words, gay people are erased from Chechnya – they do not exist and if they did it would be such an aberration that their own families would get rid of them.

Kadyrov said a few weeks later, “These [homosexual relations] are not traditional things; they are psychiatrically abnormal things. We don’t understand them.”  Here Kadyrov situated homosexuals outside the parametres of culture and tradition.

Magomed Selimkhanov, State Duma deputy of Chechnya, told the media around the same time: “In Chechnya, there are no gays, so there is no attitude toward them. Personally, I think they belong two metres under the ground.”  Elimination is the logical progression of the rhetoric that situates LGBT people outside the parametres of the social order.

In Azerbaijan, notwithstanding that homosexual conduct was decriminalised in 2000, authorities rounded up at least 83 men beginning mid-September, and, like their Chechen counterparts, tortured them, including using electroshocks, and forced them to reveal the names of others. Unlike in Chechnya, authorities did not deny that gay men in Baku were rounded up in official raids. They justified the raids on social and public health grounds.

Ehsan Zahidov, spokesperson for the Internal Affairs Ministry, said in a September interview with EurasiaNet.org that police were responding to complaints from residents in Baku that gay men were visible on the streets. He is quoted as saying: “People complain that such people walk around us, walk in our streets, and sit in our cafés. ‘These are people who do not fit our nation, our state, our mentality, please take action against them.’”

This is the familiar politics of exclusion that underpins the traditional values rhetoric. It characterises sexual and gender minorities as outgroups and hence convenient scapegoats. LGBT identities, rhetorically linked to modernity and globalisation, can readily be blamed for social ills and the perceived erosion of the moral order. This has dangerous consequences for LGBT people in the region. The Azerbaijan spokesman’s explanation echoes the language of social cleansing used by Chechen leader to justify the brutal purge there.

Government officials have also justified the Baku raids in the language of public health, claiming that the gay men arrested were tested for sexually transmitted diseases. And public health is the justification for the registry reportedly compiled by authorities in Tajikistan of 367 citizens presumed to be gay or lesbian. Details were unveiled by the newspaper Zakonnost, published by Tajikistan’s state prosecutor, which said that they were “put on a register due to their vulnerability in society and for their safety and to prevent the transmission of sexually transmitted diseases.”

The registry appeared in the context of worsening homophobia in Tajikistan. While homosexuality has been decriminalised there since 1998, LGBT groups have described to us a consistent pattern in which law enforcement targets people perceived as gay or lesbian for detention, ill-treatment and extortion, threatening to out them to their families, employers and wider community.

Zakonnost reported that a working group set up last year produced the registry based on two state operations beginning in 2016, entitled Morality and Purge.  The connection between the idea of public health, and a contaminated social body is not hard to see in that terminology.  This is a classic recipe for a moral panic – a vulnerable minority is blamed for social ills. If that group can be isolated and purged, so the perverse logic goes, then all will be well.

LGBT people are certainly not the first to be persecuted following this logic.  But through a persistent rhetoric, powerfully promoted by Russia and its allies, LGBT people have come to embody all that is antithetical to so-called traditional values. And when that rhetoric lays the groundwork for ostracising LGBT people,  it takes little to tip the balance against their  basic security—raids, round-ups, and purges are the violent consequence of political homophobia.

Graeme Reid is the director of the Lesbian, Gay, Bisexual and Transgender Rights Programme at Human Rights Watch. He has conducted research, taught and published extensively on gender, sexuality, LGBT issues, and HIV/AIDS. Before joining Human Rights Watch in 2011, Reid was the founding director of the Gay and Lesbian Archives of South Africa, a researcher at the Wits Institute for Social and Economic Research and a lecturer in LGBT Studies at Yale University. An anthropologist by training, Reid received a master’s from the University of the Witwatersrand, Johannesburg, and a PhD from the University of Amsterdam.

All for One, and One for All
A New Era for Georgian-German Economic Ties?
Comment