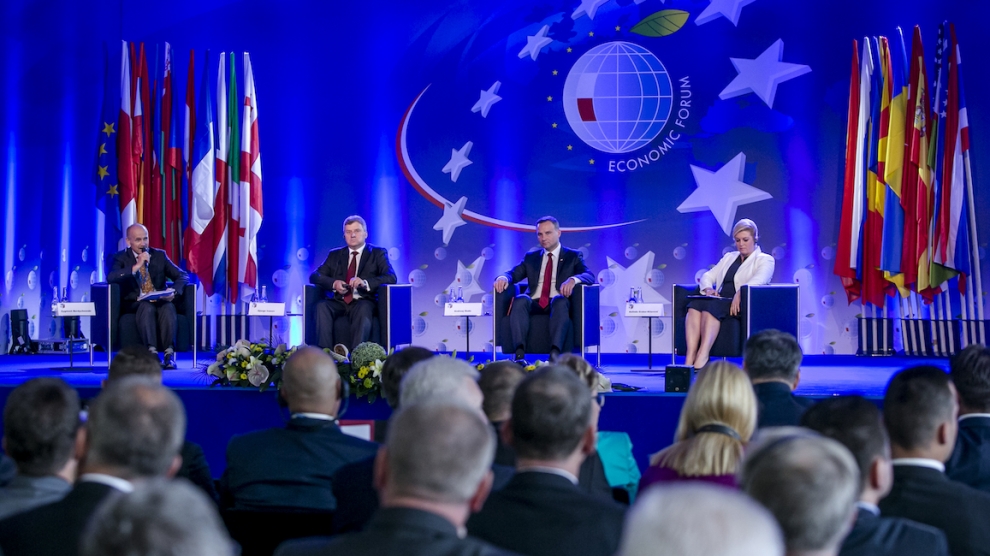 2016 has been a year of great challenges for Europe: the migration crisis which has brought up a discussion on how to tackle the immigration issue and the migrant quotas within the European Union; the terrorist attacks, the latest in Nice, France, where over 80 innocent people celebrating France’s National Day were killed; the last few weeks’ notable intensification of ceasefire violations in eastern Ukraine; the NATO Summit in Warsaw which has resulted in four multinational battalions being deployed to the bloc’s eastern flank and finally, the results of the EU referendum in the United Kingdom.

All these events have had a huge impact on the geopolitical and economic situation of the countries in Central and Eastern Europe. What will be the future of the European Union be? How can the world’s largest blog stay together and maintain the values that once united the six founding members? Are we able to bring peace and stabilisation to a continent that is, now, being torn apart? Is there room for robust economic development that could improve the living conditions of millions of people across the CEE region?

I believe there are plenty more questions that we would like to ask.

The 26th Economic Forum in Krynica aims to discuss Europe’s challenges for tomorrow and to try to find answers to these questions, to exchange ideas and to work our new ways of collaborating in the region.

In 1992, when we first organised the Forum, Poland’s foreign policy was mainly focused on the country’s relations and integration with the West. At that time, we believed, together with a handful of Polish politicians, that the country’s future position in Europe would also be dependent on its relations with Eastern neighbours: Belarus, Lithuania, Russia, Ukraine, etc.

Today, almost a quarter of a century later, Poland — the largest EU member state in Central and Eastern Europe, has a unique role to play — in uniting the region and fostering its growth. Today, we still believe in the importance of the entire region as part of the future of the continent. The goal of the Economic Forum in Krynica is to reinforce the partnership between the EU and its neighbouring countries and to foster initiatives for EU enlargement in the region.

Each year, economists, business people, government representatives, parliaments, scientists and NGO activists arrive in the picture-postcard resort of Krynica, in southern Poland, which has become a place for important discussions, key business decisions and political declarations.

The Krynica Forum has become the most important meeting place for the business elite in Central and Eastern Europe, providing a perfect chance for debates and informal talks. The attendees also have the opportunity to express their thoughts and remarks concerning the economic and regulatory policies followed by governments and European institutions.

People meet in Krynica, not only to present their suggestions, but also to share their reflections and experience and  to discuss current economic dilemmas or ways of overcoming crises, the consequences of which are still affecting Europe and other parts of the world. The most important results of the meetings in Krynica are a better consensus; wider cooperation opportunities and common initiatives, which are expected to build not only the future of Central and Eastern Europe, but also the entire continent.

Some people have compared the Krynica Forum to the World Economic Forum in Davos in Switzerland. I don’t know about that, but maybe the surrounding mountains in both locations make them draw this conclusion. However, only people who don’t understand how big the difference is would compare any of the events taking place in the region to Davos. We do not have global aspirations. We want to focus on Central and Eastern Europe.

Having said that I believe the CEE region has played an important role in the Old Continent’s history — especially in the current developments and challenges in Europe — and as such, has a unique voice to raise. The Krynica Forum is a great place to discuss this regional perspective.

The Economic Forum, which will be held from 6 to 8 September, 2016 in Krynica, Poland, intends to create a platform for open discussion about the future of Central and Eastern Europe and the Old Continent. Emerging Europe is a media partner of the Forum. Click here to register for the Krynica Forum.

Zygmunt Berdychowski is Chairman of the Krynica Economic Forum Programme Council and a co-founder of the Institute of Eastern Studies Foundation. He was a Member of the Polish Parliament at the beginning of the 1990s. In 2011, he was awarded the Order of Polonia Restituta by Poland’s President Bronisław Komorowski. He is also a Himalayan mountaineer and completed the last of all the Seven Summits in 2015. Zygmunt is a graduate of law and administration at the Jagiellonian University.

Are There Differences Between How Tax Regulations in Poland and IAS Treat Intangible Assets?
Why Is Belarus Tech Booming?
Comment