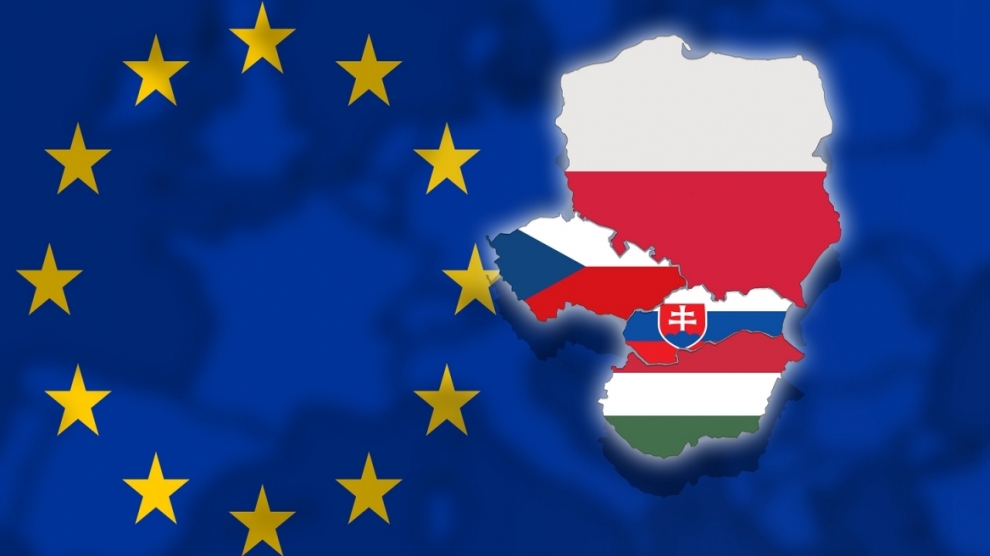 Ever since central Europe’s transition to democracy, the Visegrád Group (V4) has been a cooperative project based on the principle of costs and benefits. In recent times however, the complex political processes within the European Union have brought new challenges to the group, and divisions within it might well be made permanent by increasingly diverse views on the institutional future of the EU.

The Visegrád countries (Czech Republic, Hungary, Poland, Slovakia) have come a long way since their joint declaration in March, in which they called the idea of multi-speed integration unacceptable in their response to the European Commission’s white paper on the matter. Today, no traces of the then-united response of the V4 remain. In the quickly changing EU macropolitical environment the economic-political preferences dividing the Visegrád Group are increasingly visible. Brexit and the EU’s complex economic-political crisis has turned the question of multi-speed integration and consequent issues of sovereignty into a practical problem.

It is primarily Slovakia which stands out from the group, mainly because of its membership of the eurozone, but for several other reasons too, not least Vladimir Meciar’s early rule which meant that illiberal state building began immediately after the democratic transition. Although post-1998 governments successfully overcame Bratislava’s international isolation and put the country on track for integration into transatlantic structures, the Meciar regime left marks on the country’s democratic political culture that are still visible today. However, the leadership of one of Europe’s most corrupt countries has realised that times are changing. The Slovakian government has sent an unambiguous message that Bratislava wants to become a part of core-Europe, and it does not wish to position itself with the Polish and Hungarian governments working to undermine trust in the EU and compromise-based cooperation. Moreover, Prime Minister Robert Fico is showing more and more willingness to allow Brussels to assume additional competences from eurozone members. If Slovakian Minister of Finance Peter Kazimir is elected president of the eurogroup (not likely to happen until next year, on completion of German coalition talks) it would serve as justification for Bratislava’s realignment.

The Czech Republic’s situation is complex for a number of reasons: thanks to President Milos Zeman, attempts to transform the political system are visible there as well, but the volume and success of such efforts are nowhere near those of Fidesz in Hungary, nor those of the Polish Law and Justice Party (PiS). The Czech Republic is the most Eurosceptic nation in the post-Soviet sphere, and antagonism towards the EU is part of Czech political culture. Consequently, the EU’s popularity is barely over 35 per cent. However, Andrej Babis, who was elected prime minister in October, is not an ideologically-driven politician and might not be overly interested in isolating the Czech Republic politically and economically, especially as Prague’s main economic partners are Germany and Slovakia. Even if the new government will not seem to be willing to join the eurozone in the short-term, it will presumably not overwrite previous western expectations that Prague would want to be part of the EU’s integration fast lane. This is what a representative from October’s election winner, ANO, was referring to recently when he said the Czech Republic’s western orientation can be best preserved against anti-EU narratives such as those spread by radical right-winger Tomio Okamura by joining the common currency zone. The leader of the Eurosceptic, anti-immigration party gained 10.7 per cent of the vote in the election and considers Viktor Orbán’s EU-policy exemplary.

On the contrary, the Orbán regime, which has become a point of reference for European far-right parties, has not shown much interest in pushing Hungary towards faster integration built on deeper economic cooperation. The Hungarian government has strengthened the impression that it is not interested in participating in economic and monetary union, which could be a real disadvantage for the country during the formulation of the currency zone’s future regulation. For instance, contrary to the outgoing Czech social democrats, Fidesz is not interested in attaining observer status in the Eurogroup, where they the most important reforms affecting the eurozone are discussed, and so far it is unknown how all these will effect non-member countries in terms of taxes, the banking sector, the investment fund and such like. Instead, all of the Orbán government’s efforts are spent ‘stopping’ Brussels, which allegedly wants to become stronger at the expense of member states via stealthy legislation. In Poland, the ideologically-driven PiS government likewise focuses on rejecting Europeanisation and western development models to increase national sovereignty. Jaroslaw Kaczynski’s markedly different concept is characterised well by the fact that post-Brexit he was the only one who proposed amending the EU treaties in order to cut back the competences of the Commission, notwithstanding the fact that Viktor Orbán had also previously encouraged such action.

In the debate on the future of the EU, Budapest – although it rhetorically mainly supports uniform integration – considers the institutionalisation of multi-speed Europe acceptable with the aim of strengthening national sovereignty. The Hungarian government’s propagation of stronger national sovereignty might have realised that this is only possible within some form of flexible integration, and so since autumn 2017 it has no longer considered the establishment of a multi-speed EU built on increasingly frequently enhanced cooperation initiatives an evil proposal. Rhetorically however, it continues to oppose the two-speed Europe concept, which Viktor Orbán interprets as the formation of an EU with first- and second-class members.

Another systematically important factor in the future of integration is Budapest’s anti-EU campaigns. The Orbán government has been trying to ‘stop Brussels’ for eight years. It is characteristic of the Orbán regime that the ‘protective state’ defending the country against enemies such as ‘foreign interests’ or ‘aliens’, increasingly interferes with the economy, culture and education. All this fits into a wider discourse on sovereignty on the basis that there is a potential conflict between the Hungarian nation and the dangerous West advancing in the wrong direction politically and economically, which means that strengthening national sovereignty is indispensable. The PiS government is similar: the Polish foreign minister declared in March that high-level of trust in the EU needs to decrease. In constrast to Western European liberalism, Orbán and Kaczynski would turn the EU towards politics built on preserving religious and national self-identification, in which societies would be based on ethnically homogenous, Christian, traditionalist values. This basically describes the concept of the ‘cultural counter-revolution’ they declared in Krynica in autumn 2016. Destructive anti-EU campaigns are for instance important for the future of integration, due to the fact that while they allow the governments of member states to argue against unwanted community decisions by referring to the legitimacy of nation states, they could permanently undermine the legitimacy of EU institutions.

It is also a rarely examined question how much space is left for the V4 to influence EU decision-making in cases important for the region in the wake of realignments. Besides being politically divided, changes in EU decision-making weaken the block’s unity as well: according to the Treaty of Lisbon, the double majority rule is in force from 2017 onwards, which allows Germany and France to veto anything if they unite against it, meaning that the so-called ‘asymmetric intergovernmentalism – which favours large member states over small ones – is being strengthened further. This means that, lacking allies, the V4 will have a far harder time vetoing proposals unfavourable to them.

A good example is the Council’s vote on the status of posted workers, where Hungary was relegated to the minority together with three other states. The EU directive from 1996 currently in question is a glaring example of a policy issue dividing Western and Eastern member states, in which the Visegrád Group originally represented a uniform opinion. The vote on October 24, 2017 was exemplary in terms of the divisions within the V4: while Slovakia and the Czech Republic in the end approved the dossier on amending the directive thanks to French lobbying, Hungary and Poland (as well as Lithuania and Latvia) voted against it. This event confirmed that efforts to isolate smaller member states or divide the V4 might become more frequent in connection to topics where the interests of Eastern and Western members are contrary to each other. And this could force V4 members onto new paths of cooperation.

Edit Zgut is a foreign policy analyst at Political Capital, and a guest lecturer at Pázmány Péter Catholic University.

China and Central Europe: Don’t Believe the Hype
The Azerbaijani Laundromat: Why It Matters
Comment