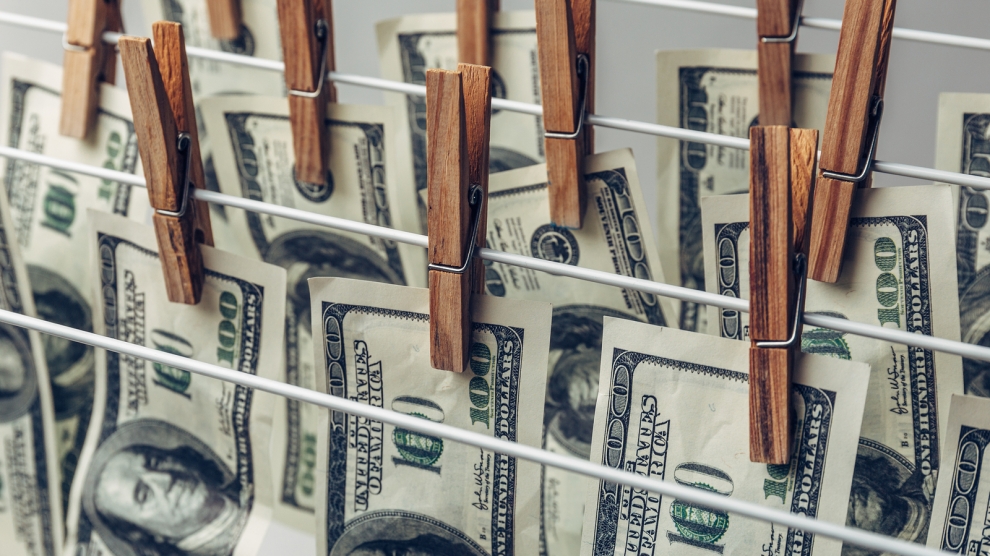 Money laundering may not be theft, but it is a product of theft. Sources of laundered money may include illegal activities such as trafficking in drugs or humans, or it may be diverted income from natural resources, inflated costs, bribes, fake loans, or other financial manipulation. The money might be stolen from the state, in the form of unpaid taxes or other charges, or from the people of a country – as with stolen revenues from the sale of natural resources from oil to diamonds. Money laundering thus reflects economic and moral damage to individuals and institutions and thereby threatens the stability and security of states, societies, and regions.

In September, the Organized Crime and Corruption Reporting Project (OCCRP), in partnership with more than a dozen European and US news organisations, broke the story of an Azerbaijani laundromat which “cleaned” 2.5 billion euros (almost 3 billion US dollars) in a two-year period using UK-registered shell companies and a European bank.

The news was hardly surprising to those who follow Azerbaijan. In 2012, the OCCRP named Azerbaijani President Ilham Aliyev its Person of the Year. At that time the OCCRP cited not only the deep corruption in the country, but the thorough documentation of various types of corruption by the ruling family and associated oligarchs. As subsequent revelations affirm, Aliyev fully deserved the 2012 OCCRP title.

The recent “Azerbaijani Laundromat” report traces the routing of payments from 2012 to 2014 in bundles of tens to hundreds of thousands of euros. The origin of these millions is murky. Some came from Azerbaijani ministries, some from the Russian arms exporter Rosoboronexport and other actual companies. The largest single source (about 1.4 billion US dollars) came from the International Bank of Azerbaijan (IBA), from accounts linked to “mystery” companies whose business activities, or even websites or physical locations, cannot be located.

Some of the money was used to purchase luxury goods. Large sums were apparently spent to influence businessmen and influential political figures particularly in the Council of Europe. Most of the money went to other shell companies registered in the UK as well as entities in the UAE and Turkey, showing that this report, though extensive and complex, probably does not cover the full scope of the money flow.  Payments went through the Estonian branch of the Danske Bank where bank officials, says the report, turned a “blind eye” to the large transactions.

Aligning money transfers with specific actions of influential European recipients, OCCRP and its partners make a strong case for Azerbaijan buying influence. From a human rights vantage point, the most distressing series of payments was to deputies in the Parliamentary Assembly of the Council of Europe (PACE), Italy’s Luca Volonté and German’s Eduard Lintner. At present, Volonté is being prosecuted in Italy for corruption and prosecutors say he worked to quash a PACE report on political prisoners in Azerbaijan. Ilham Aliyev used the failure of PACE to adopt its own commission’s report to claim there were no political prisoners in Azerbaijan.  Volonté received nearly 2 million euros from the Azerbaijani laundromat.

Lintner, a German parliamentarian and later PACE deputy, received large payments from the laundromat during his service as an election monitor. He got one payment just after his claim that Azerbaijan’s 2013 presidential elections – denounced as not free or fair by domestic, US, and OSCE monitors – were up to German standards. He got another when a domestic critic of those elections was arrested. Lintner ultimately received a total of 820,000 euros (just over 1 million US dollars) between 2012 and 2014.

The story is reminiscent of the Russian laundromat, reported by OCCRP in 2014 which involved much more money – 30 billion US dollars – reflecting no doubt the greater size and complexity of the Russian economy and the greater number of oligarchs. More important, both operations involved 33 of the same companies, illustrating another aspect of strong post-Soviet bonds between the two energy-producing and corrupt former Soviet republics.

The scope of this international activity makes observers wonder what might be done to curtail the money laundering on which bribery and theft depend. The damage of criminal behavior is significant and it is both material and moral.  Money is diverted from stated business purposes, which in the case of oil revenues is stolen from the people of the country who may be considered its owners and the rightful beneficiaries of its sale.[1] Money of uncertain origin goes into the pockets of influential European political figures.  When such subversion of judgment affects the Council of Europe, it casts doubt on the Council’s own integrity and plays into the hands of authoritarian propagandists who argue that Western institutions are corrupt, so they are no worse. The propagandists can blur the lines between institutions that strive to uphold the law and those that flout it while claiming they represent a legitimate variation on the ideal.

Watchdog groups and human rights organisations, if they are unable to bring legal action to bear or if it fails, have tried “naming and shaming.” Sceptics doubt the efficacy of this tactic noting that perpetrators of high-level crime such as international money laundering, might be named but hardly shamed. The case of Azerbaijan over the last decade, highlighted by the laundromat report, suggests we revisit the strategy and arguments against it. Although the perpetrators themselves seem shameless, not all their partners are immune to the shame of publicity and public criticism.

Despite rampant global corruption, there are still laws and ethical standards and there are still entities that strive to conform to them. There are still international organisations that want, or can be compelled, to uphold their own stated norms and ideals. Sponsors can withdraw advertising and other support if their business partners complain or shame them. Thus corruption can be made more difficult and more costly.

The 2012 report Caviar Diplomacy, produced by European Stability Initiative (ESI), documented Azerbaijani gifts and payments to CoE members. After five years, the report was used to force the resignation this past October of PACE President Pedro Agramunt, considered a supporter of the Aliyev regime who quashed criticism of Azerbaijan’s human rights record and mismanaged corruption charges against CoE deputies.

International financial institutions (IFIs) that articulate transparency and ethical standards among their basic principles have not always followed those as a guide to their investments especially in countries that produce oil, gas or need vast and lucrative infrastructure investments. The World Bank has had a troubled history in this regard.[2] In recent months the NGO Crude Accountability has called on IFIs to link their investments more closely to transparency and honesty/ legality.  A present director of the European Bank for Research and Development is identified in the Azerbaijani laundromat as a recipient of more than 800,000 Euros.

Finally, naming and shaming deprives collaborators of an important tool – claiming they did not know of illegality and abuses. Moreover, naming and shaming – and documenting – gives ammunition to people and organizations that fight for transparency, legality, and responsible management of resources, and against erosion of the rule of law.

Creating a safe haven for one batch of money launderers puts out the welcome mat for other crooks. Money laundering and other forms of corruption are already infecting the international financial system and aiding the drift of wealth to the top 1 per cent.  Transparency efforts can be used to stop it or international actors can be complicit. There is no middle ground.

[1] This is the position of the Extractive Industries Transparency Initiative (EITI).