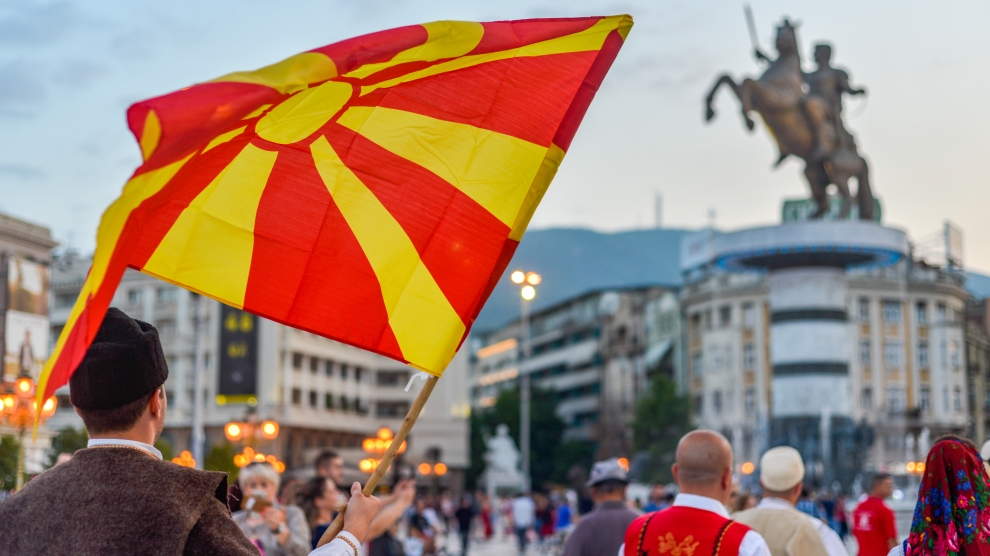 No politician, diplomat, bureaucrat or journalist I’ve ever asked this question has answered it. Yet they’re quick to tell me to give away my ethnic identity. They try to convince me that the forced renaming of Macedonia, the redefining of what it has ever meant to be Macedonian, and the literal rewriting of Macedonian history is a “good thing because it resolves a diplomatic dispute”.

What they’re really telling me is that my ethnic group is lesser than theirs.

The artificial “name dispute” – admittedly created by Greece to eradicate the existence of Macedonians as an ethnic group – involved Greece (with Bulgaria hopping on board) vetoing Macedonia’s NATO and EU membership bids unless Macedonia changed its name, identity and history into “North Macedonians” from “North Macedonia” while simultaneously giving the term “Macedonia” to Greece and Bulgaria, depending on context. Further, Macedonian history is being rewritten by Greek and Bulgarian “scholars” to reflect Greek and Bulgarian anti-Macedonian viewpoints. In Bulgaria’s case, they even threw in revisions of Jewish history (yes, really) to erase their anti-Semitic past.

But why did the EU and NATO, led by the United States, enable and support Greece and Bulgaria in their quest to annihilate the existence of Macedonians’ ethnic identity? Imperialism. Nothing will stand in the way of increasing their membership, especially human rights, democracy and international law. The one-country veto rule in the EU and NATO ensures that one-country racism rules these organisations.

Enter the ironically-named “Prespa Agreement” (that no Macedonian agreed to). This is the 19-page document that changes Macedonia’s name to “North Macedonia”, relegates our identity to “North Macedonian”, rewrites Macedonian history (see Article 8-5), renders Macedonians who live in Aegean Macedonia (the part of Macedonia annexed by Greece in 1913) as non-existent (another yes, really – see Article 7-2) and redefines everything that it ever meant to be Macedonian. I’m asking the question in the title of this op-ed again…

Not to be outdone, Bulgaria has been emboldened in its insistence that all (and more) anti-Macedonian resolutions in their ironically-named “Friendship Agreement” with Macedonia be implemented. It renders Macedonians in Pirin Macedonia (annexed by Bulgaria in 1913) as non-existent and Macedonian heroes as “Bulgarian”. Bulgaria is also claiming that Macedonians in Albania (Albania was handed Macedonian territory in 1919) are “Bulgarian” and have started an international propaganda war to “convince” everyone that Macedonians suddenly disappeared.

As you can see, this is not just a “dispute” between the Republic of Macedonia and Greece/Bulgaria. All of Macedonia was partitioned in 1913 among Serbia (now the independent Republic of Macedonia), Greece, Bulgaria and, in 1919, Albania. The redefining of Macedonia affects all Macedonians, everywhere. And, as if stripping away an ethnic group’s right to self-determination in its own (supposedly) independent country and traditional land wasn’t bad enough, the slippery slope has started internationally and we’re now being told that we’re not Macedonian anymore by, in this case, Canadian government officials…

The avalanche (excuse the cold Canada references) of anti-Macedonianism has even further energised Greek and Bulgarian politicians to proudly and publicly celebrate that these “agreements” eradicate Macedonians’ ethnic identity. And what do their fellow NATO/EU members say in response? Nothing. I would say “silence is complicity” but that’s an understatement. NATO and the EU are actually complicit as they had also demanded that Macedonia change its name.

The brutal irony is that, after generations denying the existence of the “M” word and trying to wipe out any trace of Macedonia and Macedonians, Greece suddenly, in 1988, began claiming that the name “Macedonia” belonged to them. Surreal. Former Greek PM Constantine Mitsotakis even admitted in 1995 that the so-called “name dispute” had nothing to do with Macedonia’s name, but everything to do with hiding Greece’s policy of denying the existence – and cultural genocide – of the large Macedonian minority in Greece.

And speaking of brutal, the US interventionist machine has, since the Republic of Macedonia’s independence, stoked civil war, granted amnesty to terrorists, overthrew a government that they already controlled to install a puppet regime that they had even further control over, detained and threatened female MPs and their families, imprisoned those who dared speak out against US interventionism, defied international and Macedonian law, the Constitution, the will of the people, and all democratic principles that they so proudly espouse – to force through the name, identity and history change.

Of course, all, or any, of these actions should have stopped the “dispute” dead in its tracks. NATO and the EU should have reprimanded (or better yet, expelled) Greece and Bulgaria for the blatant violation of the rights their organisations claim to uphold, but instead they chose to aid them, all in the name of increasing NATO and EU membership. The international community should be condemning all parties involved in the cultural genocide of Macedonians. The aforementioned group of politicians, journalists, etc. – which espouses the defence of human rights, democracy and the rule of law – should issue condemnation, not celebration, of hypocrisy.

Failing this approach, all they needed to do was put themselves in our shoes. Would they celebrate the eradication of their ethnic group? No. So we’re back to them viewing Macedonians as illegitimate and unequal. Will any of them finally take me up on my request and publicly tell me why?