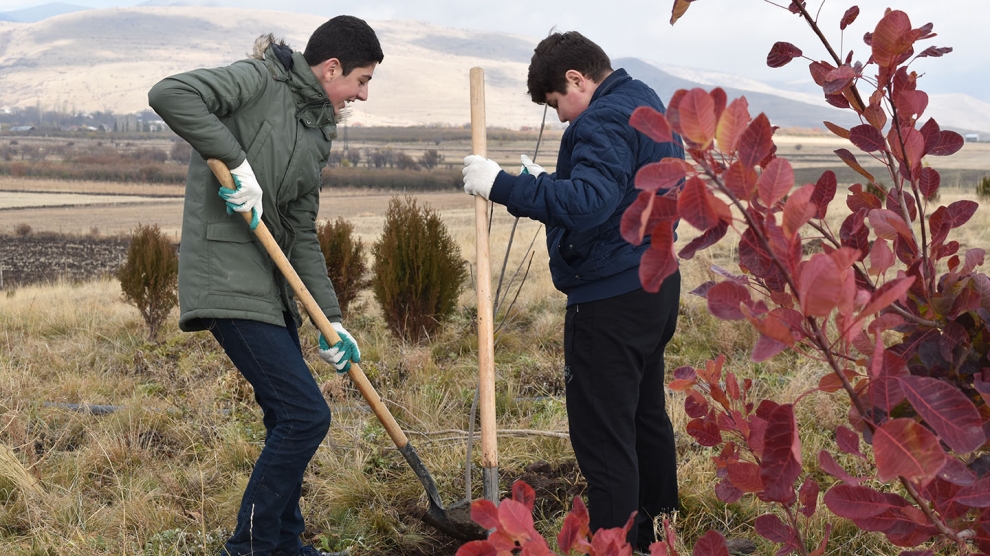 Armenia Tree Project (ATP) founder and activist Carolyn Mugar was honoured last month at the Forest Summit: Global Action and Armenia in recognition of her decades of devotion to Armenia and its forests. Mugar, an Armenian-American who lives in the Boston area, has long been an advocate for the betterment of Armenia, its people, and its environment.

Ms Mugar founded ATP in the early 1990s when Armenia was facing a severe energy crisis and people resorted to widespread use of wood for cooking and heating fuel. The country lost many trees in urban and rural areas, so ATP began replanting. In the ensuing years, the organisation has established four tree nurseries, four greenhouses, and two environmental education centres.

Armenian Prime Minister Nikol Pashinyan addressed attendees at the inaugural forestry conference, and in praising Mugar announced that part of a forest will forever bear her family’s name.

“Your work, Ms Mugar, is invaluable. Many of your charitable initiatives and programmes have contributed to Armenia’s development since [Armenia’s] independence,” said Mr Pashinyan at the opening session of the Forest Summit. “I would like to inform you that on the occasion of the 25th anniversary of the Armenia Tree Project, the government of the Republic of Armenia has made a decision to establish the Mugar Family Protected Lands on the territory of Margahovit Forest.”

Margahovit is a village in Lori where ATP has made significant investments, including the Mirak Family Reforestation Nursery, the Michael and Virginia Ohanian Center for Environmental Studies, the Bilezikian Family Experimental Greenhouse, and the Hrant Dink Memorial Forest. The area is known for its clean air and spectacular beauty, and it has been a base for many of ATP’s programmes over the past 15 years.

The inaugural Forest Summit brought global forestry professionals to American University of Armenia for panel discussions and collaborative sessions, and also into areas like Dilijan National Park and Margahovit Village for immersive field visits. Located in northern Armenia, ATP’s sites in Margahovit employ of dozens of Armenians and the Mirak Nursery has a capacity to grow more than a million trees. Much of this progress is a direct result of Mugar’s dedication and commitment.

The days after the conference yielded another high honor for Mugar, when Minister of Environment Erik Grigoryan presented her with an official gold medal in recognition of her quarter century of leadership of Armenia Tree Project.

“We are honoured to present the official Gold Medal issued by the Ministry of Environment to Carolyn Mugar,” said Minister Erik Grigoryan during a meeting on October 25. “This is the highest medal issued in the environmental sector in Armenia, and we are bestowing it upon Ms Mugar in recognition of her significant contribution and investment in environmental conservation. We congratulate you on 25 years of the Armenia Tree Project, and hold its accomplishments in high regard.”

Though small in size, Armenia has worked hard to protect its forests and has shown renewed political commitment to protecting, restoring, and expanding Armenia’s forest cover. The government currently has a goal to double its forest cover by 2050 as part of its commitment to the Paris Agreement on Climate Change.

Mugar founded ATP in 1994 to address the rapid loss of trees in the country. In addition to last month’s conference, the non-profit celebrated its 25th anniversary year with a series of fundraising events around the United States, commemorative tree plantings in Boston and Los Angeles, and this fall will plant its six millionth tree in Armenia.

ATP’s goal is to assist the Armenian people in using trees to improve their standard of living and protect the global environment. In doing so, it is guided by the need to promote self-sufficiency, aid those with the fewest resources first, and conserve the indigenous ecosystem. ATP has created hundreds of jobs through tree-related programming and educated tens of thousands of students on environmental issues. Environmental education inspires younger generations to protect and preserve the environment.