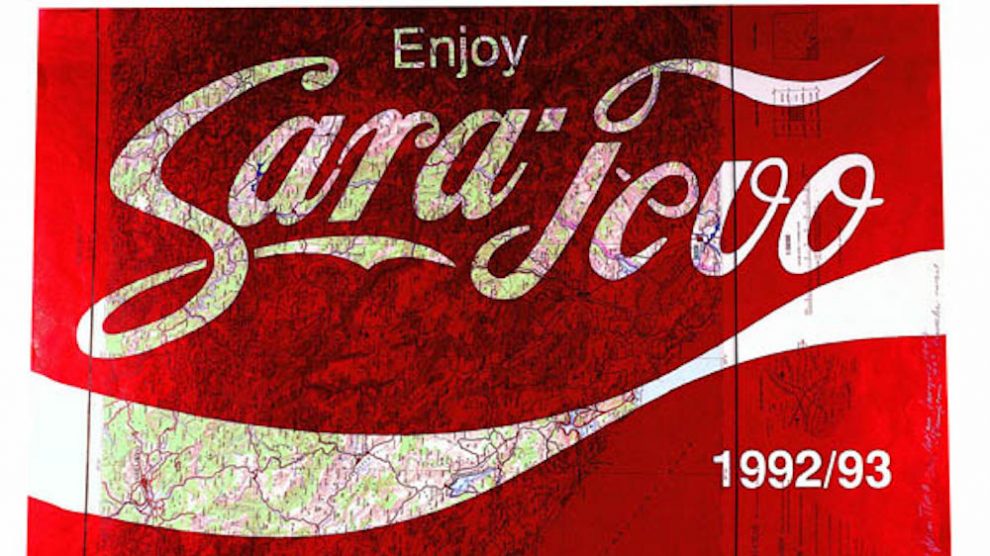 Rupert Wolfe-Murray discovers that during the Bosnian War, posters were just about the only way that artists in Bosnia and Herzegovina could protest about what was happening.

I’m working on an epic book that’s coming out in May this year: Bosnian War Posters, by Daoud Sarhandi.

It’s an incredible collection of propaganda and art that he and Alina Wolfe-Murray, my ex-wife, collected just after the war in Bosnia and Herzegovina. It’s taken a long time to come to life but that’s another story.

The posters are arranged chronologically, with long captions, and it tells the story of Bosnia’s war. Young people in Bosnia and Herzegovina are particularly interested because they don’t learn about the war in school – it’s too recent, too raw, too politicised – and they want to learn about it so they can avoid the mistakes of their parents. Young Bosnians also want to see how people communicated before the internet.

Many of the older Bosnians I’ve met, those who have experienced the war, don’t seem very interested in it; on the one hand they want to forget, while on the other hand they can’t stop thinking about it (or so I’m told).

The reason I’m putting this article together is that I got a very inspiring audio messages from the author, on WhatsApp. Daoud’s audio message (which I’ve transcribed below) gave me the insight I’d been looking for; it answers the question I’ve been asking myself: What makes our book, Bosnian War Posters, unique?

Right place at the right time

This is what Daoud said:

“The thing about Yugoslavia is that all the stars were aligned. We were in the right place at the right time, in a country which had a conscious design memory – or history – connected with Europe and Russia. One of our contributors, Bojan Hadžihalilović, says the war happened just before the internet and social media came into its own. I think the great poster campaigns the world witnessed in the past are over. Bosnia may have been the last war that used posters to such effect.

“Artists like Began Turbić, Asim Đelilović, and others are valuable as their posters and concepts are original, unique, and self-generated. I was recently thinking about doing a similar book about the Spanish Civil War as some of the work is beautifully drawn and designed. However, Spanish Civil War posters were produced by propaganda agencies on both sides rather than individual artists. They were just churning out very formulaic stuff and you actually learn very little from this material about the war as a whole, or what the people were really feeling. That’s not true about the posters we found in Bosnia and Herzegovina. I think Began Turbić’s work, for example, is stunning compared to anything that came out of Barcelona or Madrid.

“Also, the only surviving Spanish Civil War posters are from the conquered cities. There’s almost nothing from small places and nothing independent left. This is not true of the material we found in Bosnia and Herzegovina, as we were able to visit the most remote locations just after the war as well as scores of individual artists.

“What we found is absolutely unique. Not only in terms of Bosnia and Herzegovina, but in terms of world heritage. I can’t think of any war in history that generated such a rich heritage of original poster art, and the interesting thing is that it was genuinely independent in that most of the work we collected was produced by individual artists, working alone, and the government and army seemed to ignore them. It was a moment in time that’s not going to come back. It was something that doesn’t happen everywhere and probably will never happen again.

“I’m very, very proud of Bosnian War Posters. As a book it’s beautiful and we managed to save so much of the Bosnian’s wartime experience that would undoubtedly have been lost. As far as I know, we were the only people going around collecting all this material in a systematic way. I think the Bosnians didn’t quite appreciate its value, plus they were exhausted after the conflict. They’d had enough of the whole bloody mess. Sometimes outsiders see things that locals don’t in this regard – the distance helps. I knew from the go get that it was all very special and I’m glad we helped to preserve this bit of their cultural heritage.”

Artists in Bosnia and Herzegovina were able to draw on this rich history of ancient and modern art as many of them had been through a classical education at Sarajevo’s renowned School of Art, where great art is studied over many years. I was at this art school recently and can confirm that it’s still going strong — and the students I met are very keen to see our new book of wartime posters.

My own interpretation of the Bosnian War posters is that it was the only way that artists in Bosnia and Herzegovina could protest about what was happening. As electricity was heavily restricted, the only mass media they had occasional access to was the radio.

These shortages made the poster all the more powerful as a means of communication. The same didn’t apply to the other warring parties, Croatia and Serbia, which had fully functional mass-media and national propaganda systems.

Although we collected some posters from these countries, very few wartime posters were produced as they didn’t really need them. But we got a few from the start of the war in Croatia as well as some interesting magazine covers from Belgrade.

What I didn’t appreciate until very recently was the level of freedom Bosnian artists had to express themselves – which is ironic considering that the Bosnian people were effectively hemmed in, geographically, by their enemies.

They were imprisoned by external forces but their spirits were free.

The full version of Rupert Wolfe-Murray’s article about the Bosnian War Posters project can be read here. (We have republished it – with permission – in an abridged form).

A crowdfunding appeal will soon be launched to offer discounted copies of the book to Bosnians everywhere. If you’d like to see more of the Bosnian War Posters just follow the #bosnianwarposters hashtag on Instagram.

The headline photo of this piece was produced by Trio Studios during the war. It’s a re-interpretation of the Coca-Cola symbol and is printed on the back of an old army map, as paper was in such short supply.

Mr Jones: The Welsh journalist who told the world about Ukraine’s famine
CEE’s burgeoning relationship with Taiwan is not just economic and political, it’s cultural
Comment