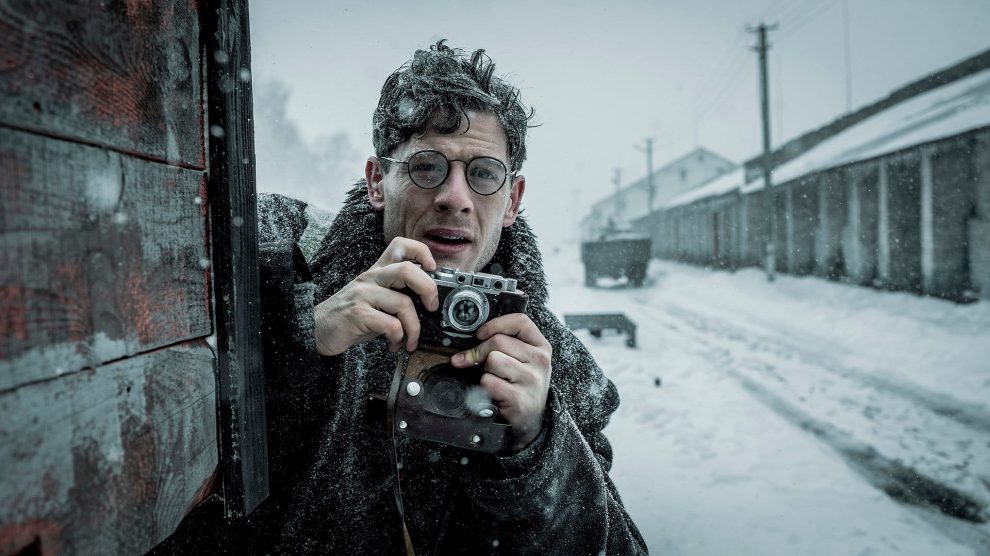 ‘I passed many villages. Everywhere I heard crying: We have no bread! We are dying! Tell England that we are swelling from hunger.’

The story of Gareth Jones, a young Welsh journalist who on a 1933 trip to the Soviet Union managed to elude his minders and travel extensively throughout famine-hit Ukraine, telling the world of the horrific suffering he witnessed, is remarkable for a number of reasons, not least the fact that before Polish director Agnieszka Holland’s movie Mr Jones, it had never been told on film.

Following Russia’s new invasion of Ukraine on February 24, there has never been a better time to revisit Jones’s remarkable story.

“I felt like the ghosts of this crime are just calling for… some kind of spotlight, for some kind of justice,” said Holland when asked why she chose the very deliberate starvation of Ukraine by the Soviet Union as the subject for a movie.

Born in Barry in 1905 and educated at Trinity College, Cambridge, Jones saw a promising career at the UK foreign office cut short after he dared to suggest that another war between Britain and Germany was inevitable (Jones had met Hitler just days before the Austrian became German chancellor; indeed, he flew on Hitler’s private plane).

Managing, nevertheless, via his foreign office contacts to procure a journalist’s visa for the Soviet Union, he briefly mixed with the embedded foreign correspondents in Moscow but quickly realised that their Panglossian view of the Stalinist revolution was far from accurate. Aware that there were real stories beyond the capital he set off for Ukraine, where rumours of hunger and famine had been circulating for some time.

‘We are waiting for death’

For nearly a month Jones travelled throughout the country, returning to Berlin on March 29, 1933, where he immediately issued a report, subsequently published by many newspapers, including The Manchester Guardian and the New York Evening Post:

“I walked along through villages and twelve collective farms. Everywhere was the cry, ‘There is no bread. We are dying’. This cry came from every part of Russia, from the Volga, Siberia, White Russia, the North Caucasus, and Central Asia. I tramped through the black earth region because that was once the richest farmland in Russia and because the correspondents have been forbidden to go there to see for themselves what is happening.

“In the train a communist denied to me that there was a famine. I flung a crust of bread which I had been eating from my own supply into a spittoon. A peasant fellow-passenger fished it out and ravenously ate it. I threw an orange peel into the spittoon and the peasant again grabbed it and devoured it. The communist subsided. I stayed overnight in a village where there used to be two hundred oxen and where there now are six. The peasants were eating the cattle fodder and had only a month’s supply left. They told me that many had already died of hunger. Two soldiers came to arrest a thief. They warned me against travel by night, as there were too many ‘starving’ desperate men.

“‘We are waiting for death’ was my welcome, but see, we still, have our cattle fodder. Go farther south. There they have nothing. Many houses are empty of people already dead,’ they cried.”

The report was met with opposition by much of the western intelligentsia, at the time still sympathetic to the nascent Soviet Union. Walter Duranty, The New York Times Moscow correspondent and de facto head of the foreign press corp published a rebuttal of Jones’ report under the headline “Russians hungry, but not starving”. In the article, Kremlin sources denied the existence of a famine, and said, “Russian and foreign observers in country could see no grounds for predications of disaster”.

Duranty’s nonsense was an example of what would today be called fake news. Far too close to a Soviet leadership which had orchestrated the famine in order to kill the very idea of Ukraine, and to bury it alongside the millions who died, he would later be disowned by The New York Times, which called his Moscow dispatches “some of the worst reporting ever to appear in this newspaper.” His Pulitzer Prize however, awarded in 1932, was never revoked.

A month after Duranty’s scurrilous slander, Jones published a strong defence of his piece:

“My first evidence was gathered from foreign observers. Since Mr Duranty introduces consuls into the discussion, a thing I am loath to do, for they are official representatives of their countries and should not be quoted, may I say that I discussed the Russian situation with between twenty and thirty consuls and diplomatic representatives of various nations and that their evidence supported my point of view. But they are not allowed to express their views in the press, and therefore remain silent.

“Journalists, on the other hand, are allowed to write, but the censorship has turned them into masters of euphemism and understatement. Hence they give ‘famine’ the polite name of ‘food shortage’ and ‘starving to death’ is softened down to read as ‘widespread mortality from diseases due to malnutrition’. Consuls are not so reticent in private conversation.”

One of those intellectuals who did believe Jones’ reports was George Orwell, who later admitted that his damning indictment of the Soviet Union, Animal Farm, was in part inspired by the awful truths Jones had revealed. Indeed, Holland’s film opens with a shot of Orwell at work on the novel, and his growing disenchantment with Stalinism forms an arc across the entire, epic film (it runs for two and a half hours).

“A picture with sinew and strength,” wrote Peter Bradshaw in the Guardian. “James Norton brings his A-game to this film, giving a muscular, sympathetic performance as Jones.”

“Holland shows the desperate desire to believe in Stalin; many intellectuals longed for him to be the antidote to Hitler and simply did not want to believe that his policies had caused such horror,” wrote Emma Jones for the BBC, while in Variety, Guy Lodge remarked: “Mr Jones gets better and more soul-stirring as it goes along.

After a particularly murky opening act detailing Jones’s embattled time in Britain’s foreign office, things slowly gather pace once he heads for Russia, peaking with a staggering, visceral stretch of survivalist drama in the frozen farmlands of Ukraine — where Holland’s aptitude for skin-prickling visual storytelling finally comes to the fore.”

Gareth Jones did not live to see his ground-breaking report vindicated: he was killed by bandits in Japanese-occupied China in 1935. It has long been suggested that the Soviet Union had a hand in the killing, in revenge for bringing the famine – which became known as the Holodomor, and in which more than 10 million people would eventually die – to the world’s attention.

Shortly after his death, the former British Prime Minister David Lloyd-George paid tribute to the reporter:

“That part of the world is a cauldron of conflicting intrigue and one or other interests concerned probably knew that Mr Gareth Jones knew too much of what was going on… He had a passion for finding out what was happening in foreign lands wherever there was trouble, and in pursuit of his investigations he shrank from no risk… I had always been afraid that he would take one risk too many. Nothing escaped his observation, and he allowed no obstacle to turn from his course when he thought that there was some fact, which he could obtain. He had the almost unfailing knack of getting at things that mattered.”