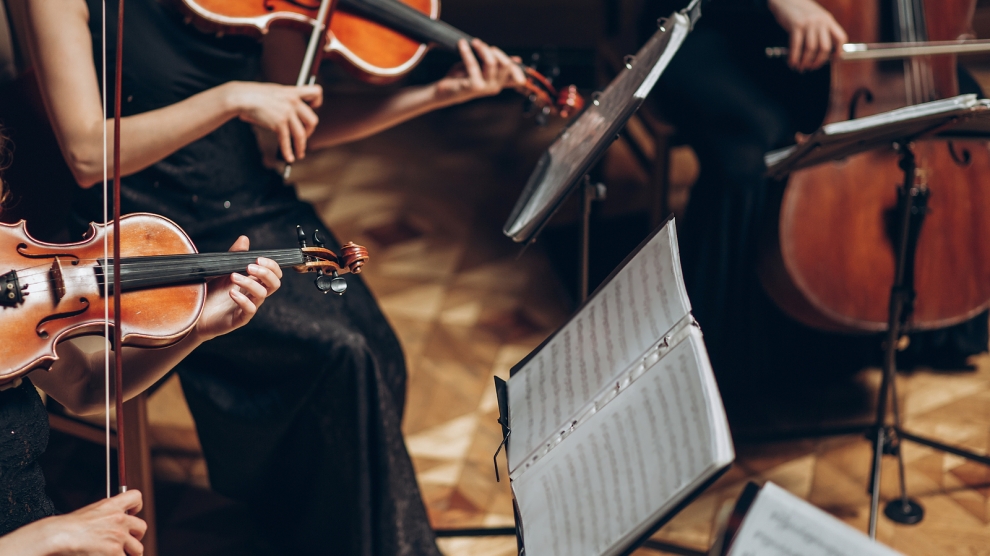 From August 31 to September 22, the Romanian capital Bucharest will play host to one of Europe’s best classical music festivals, the now bi-annual George Enescu International Music Festival, named for Romania’s greatest composer, George Enescu. An extravaganza of concerts and wonderful music it is comparable – in its desire to bring music to as wide an audience as possible – to the BBC Proms.

This year’s festival is the biggest ever, and while as usual centered on Bucharest will feature parallel concerts around Romania, in Cluj, Sibiu, Iași, Ploiești and Târgoviște.

Most of the concerts in Bucharest will take place at the splendid Romanian Atheneum (home of course to the George Enescu Philharmonic Orchestra), but there will be music at the Sala Radio and Sala Palatului.

George Enescu – known in France, where he lived and worked for much of his life – as Georges Enesco – was born in 1881, in Liveni, near Botoșani in northeastern Romania. A child prodigy, Enescu created his first musical composition at the age of five, shortly after which he was admitted to the Vienna Conservatory, where he studied with – amongst others – Joseph Hellmesberger Jr, Robert Fuchs and Sigismund Bachrich. He graduated before his 13th birthday, and in 1895 went to Paris to continue his musical education. He studied violin with Martin Pierre Marsick, harmony with André Gedalge, and composition with Jules Massenet and Gabriel Fauré.

It was while he was in Paris that he wrote his two Romanian Rhapsodies (1901–2), heavily influenced by Romanian folk music. His other major work, the opera Oedip, was not written until 1936. He also wrote five symphonies (two of them unfinished), the symphonic poem Vox Maris, and a series of chamber music.

In 1923 Enescu made his American debut as a conductor in a concert given by the Philadelphia Orchestra at Carnegie Hall in New York, and he subsequently made frequent return trips to the United States. It was in America, in the 1920s, that Enescu was first persuaded to make recordings as a violinist. He also appeared as a conductor with many American orchestras, and in 1936 he was one of the candidates considered to replace Arturo Toscanini as permanent conductor of the New York Philharmonic.

In 1935, he conducted the Orchestre Symphonique de Paris and Yehudi Menuhin (who had been his pupil for several years from 1927) in Mozart’s Violin Concerto No. 3 in G major. He also conducted the New York Philharmonic between 1937 and 1938.

In 1939 he married Maria Rosetti (known as the Princess Cantacuzino through her first husband Mihail Cantacuzino), a good friend of Romania’s Queen Marie. It is worth noting that while staying in Bucharest, Enescu did not live – as popular wisdom would have it – in the Cantacuzino Palace on Calea Victoriei (now the George Enescu Museum, dedicated to his work). The couple in fact lived in a smaller property to the rear of the main building. Enescu spent most of World War II in Romania, but was in Paris at the time of Soviet occupation of the country in 1944, and did not return.

The festival that celebrates Enescu was first held in 1958, and was founded by Enescu’s friend and sometime collaborator, the conductor George Georgescu. That first event became legendary for two things: a performance of Bach’s Concerto for Two Violins with Yehudi Menuhin and David Oistrakh as soloists, and a staging of Enescu’s sole opera, Oedip, with Constantin Silvestri conducting. The festival was initially held every three years, becoming a bi-annual event in only in 2001.

Besides performances, the festival also often features a competition element for young conductors and soloists. The work of Enescu himself remains central to the festival, and its international appeal and importance – which guarantees the attendance of the world’s finest performers – is an all too rare chance for Romania to present a genuinely positive image of itself on the world stage. Put simply, no other event regularly held in Romania can match the Enescu Festival’s prestige.

This year there are four series of concerts: Great Orchestras of the World; Chamber Concerts and Recitals; Midnight Concerts; Music of the 21st Century.

The unquestionable highlight of this year will be two concerts by the London Symphony Orchestra on September 2 and 3: the latter concert will feature work by Enescu himself. Other orchestras visiting include the Berlin Philharmonic, the French National Orchestra, the Oslo Philharmonic and the St Petersburg Philharmonic. The festival will be opened by the Berlin Philharmonic on August 31 at the Sala Palatului: Kirill Petrenko will conduct Enescu’s Romanian Rhapsody.

The Midnight Concerts (all taking place at the Atheneum) are also not to be missed. Of particular note are the two concerts by the Les Talens Lyriques on September 20 and 21, which feature Händel’s opera Agrippina in a concert format.

The full festival programme is online at festivalenescu.ro. Note that many of the more important concerts – especially those part of the Great Orchestras of the World series – sold out as soon as tickets went on sale earlier in the year. However, there are more than 200 events in all, and the chances are that you should be able to grab tickets for some events as late as the day of the performance itself.

Enescu around the world

Even if you are not in Romania, you might still be able to take part.

Enescu’s Symphony No. 3, one of the most important works of the Romanian composer, his message to mankind at the end of the tragedy of World War I and “one of the most difficult symphonies for orchestra in the entire repertoire”, as conductor Vasily Petrenko calls it, will be heard in Florence and Berlin, on September 8 and 22, respectively. It will be performed by two world-class international orchestras: the Orchestra and Choir of the Maggio Musicale Fiorentino conducted by Fabio Luisi, and the Berlin Radio Symphony Orchestra under the baton of conductor Vladimir Jurowski.

“It’s an honour to be able to expand the festival internationally,” said its executive director, Mihai Constantinescu.

In Dresden, the renowned violinist Sarah Chang will perform Enescu on September 8, while in Liège conductor Gergely Mandaras will lead the Suite for Orchestra No. 2 on September 2. In Chișinău, a concert dedicated to the festival will take place on September 20.

On September 21 and 22, violinist Alexandru Tomescu will perform Enescu’s Ménétrier in Montreal and Toronto.