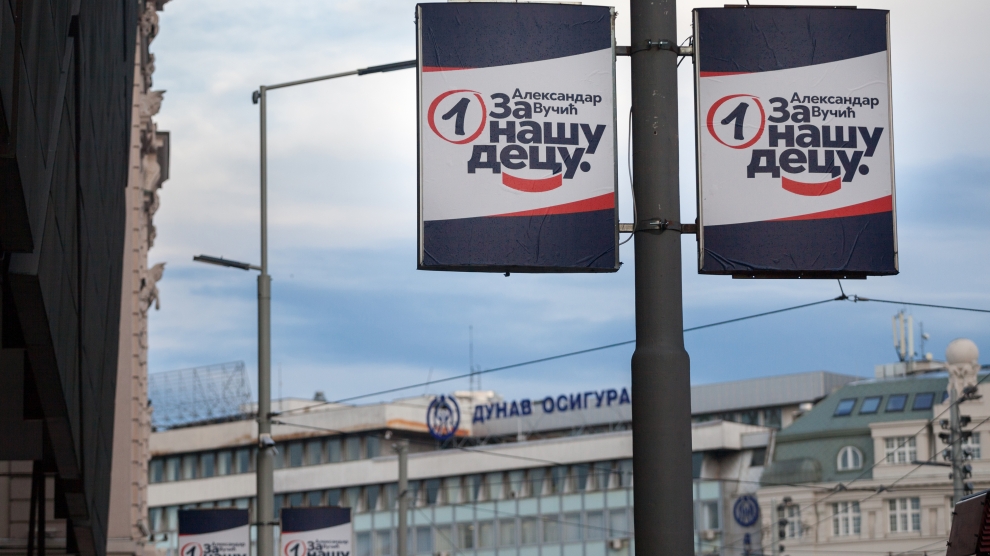 Walking the centres of Serbia’s towns and cities, a visitor could be excused for thinking that Serbian is written only in the Latin script. Billboards and commercial signage are nearly all in Latin, with only a few stragglers using the Cyrillic script.

It might seem to some that the fate of Cyrillic is sealed and that Latin is about to takeover once and for all. Certainly, its status in Serbia has long been the subject of much debate and not a little controversy. Many academics, such as the notable linguist Dr Ivan Klajn have warned the script might be in danger of eventually becoming archaic and disused.

But Cyrillic is stubbornly refusing to give way, and is still used widely, at least in official government and municipality documents where it is was made mandatory by a 2005 law. It’s important to note, however, that this law does not declare Cyrillic as the official script of Serbia; it only relates to documents and materials produced by the government.

“We probably won’t see a revival of Cyrillic in the public sphere, at least not to the extent that would satisfy the proponents of unconditional use of this Serbian script,” says Dr Dalibor Sokolović, the head of the Slavic Studies department at the Faculty of Philology in Belgrade.

“However, there is definitely an increased interest among the public for matters relating to Serbian language and script.”

Cyrillic has been used in Serbia since the Middle Ages, and derives from an older form – the Glagolitic script. For a long time however any form of literacy in Serbia was reserved solely for the clergy and the nobility, and it is doubtful that the common people in those times would have considered any script to be part of their culture.

However, as Dr Sokolović points out, over time Cyrillic has become an integral part of Serbian history and identity.

“The Serbian script – Serbian Cyrillic – needs to be nurtured like all other heritage of Serbian culture. In our community, Cyrillic has a nearly thousand-year tradition and throughout history it has represented, along with religion, a cornerstone in the preservation of the Serbian national identity,” he says.

It wasn’t until Vuk Karadžić, a philologist and linguist, reformed and standardised the Serbian language in the 19th century that literacy became common in Serbia (although full literacy was only achieved later, during socialist Yugoslavia), and Serbian Cyrillic took the form it has today. Among Karadžić’s most notable innovations was borrowing the letter ‘J’ from Latin and making the Serbian version of Cyrillic a little more streamlined compared to the Russian and Bulgarian versions, where letters like Я (ja) and Ю (ju) are used.

The expansion of the Latin script into Serbia came with the formation of the Kingdom of Yugoslavia at the end of World War I when Latin and Cyrillic were both declared official scripts, as by that time Croatian had adopted the Latin alphabet.

According to Dr Klajn, by the time of socialist Yugoslavia the Latin script had become more common than Cyrillic. And this trend continued even after the dissolution of Yugoslavia, with the decline being accelerated by computers, the internet and mobile phones. It took a quite a while for the Cyrillic script to become available with native support on digital devices without the need for burdensome and complicated third-party applications. But this came too late. Even in the Serbian corners of the internet, Cyrillic is only used sparingly.

Dr Sokolović agrees that the introduction of new technologies and their related terms in English, helped to push Cyrillic out.

“Today it’s a habit – in our daily lives we communicate, actively and passively, in English and other languages that are written in a Latin alphabet. Additionally, the question of the domination of the Latin script has to do with the conformism and inertia of contemporary Serbian speakers. Cyrillic may not have been widely supported at the begging of the technological development but now its use requires much less effort,” he tells Emerging Europe.

Even though there is actually a Cyrillic top-level domain for Serbia (.срб), only a few high-traffic sites use it. Even the Serbian government doesn’t seem to keen on registering .срб domains.

The script isn’t helped by a – largely arbitrary – association with traditional causes and the political right. The logic goes that if somebody cares enough to switch alphabets on their computer or mobile phone, they might just care about such things too much.

Of course, there are no studies to confirm or deny this, but the implication is definitely present in the Serbian public sphere. Some who consider themselves cosmopolitan and liberal opt to use only the Latin script.

“I suppose such a view results from the importance that traditionalists place on the role of language and script in the structure of national identity,” Dr Sokolović explains. “However, based on the experience from my surroundings, I cannot conclude that the use of Cyrillic is limited only to nationalists.”

All of this has prompted many grassroots organisations, such as the Society for the Defense of Cyrillic – named after Serbian writer and poet Dobrica Erić – to begin thinking about how the script might be saved from eventual oblivion, as the 2005 law concerns only official use by institutions while the private sector and private citizens are free to use whichever script they choose.

Other societies for the protection of Cyrillic have also been formed and have lobbied continuously for some kind of legal protection for a script they feel is about to disappear.

They do seem to have a point. A 2014 poll found that people aged 20 to 29 use Latin 46 per cent more than they use Cyrillic. Older people aged 70 to 75 tended to use Cyrillic more.

“Today, Cyrillic doesn’t so much need ‘protection’ as positive discrimination. Protection itself needs to be understood as constant care about its state and modernisation. It wouldn’t do good to impose Cyrillic, it [the script] should be presented as something fully modern and functional,” Dr Sokolović says.

That younger generations prefer the Latin script is easily observable in schools. Serbian schools do not ban pupils from using Latin and the Cyrillic script is only mandatory for Serbian language and literature exams.

In 2018, a law was drafted with the intent to protect Cyrillic and elevate it over Latin as the only official script. Under the provisions of that law, Latin would become an auxiliary script. And unlike the previous law, this one would be binding for schools and the private sector and – most notably – the media.

As things stand now, of the many dailies and tabloids in Serbia, Politika and Večernje Novosti are the only high-circulation newspapers to be printed in Cyrillic.

However, for reasons that are not immediately clear, the law has been in abeyance for the past two years with no resolution in sight. Some have criticised it, most notably the Serbian linguist Ranko Bugarksi, as being too draconian. There are people in Serbia who consider both scripts to be part of their history and heritage, and for them elevating one over the other is not acceptable. Not to mention the Croatian and Bosnian minorities in Serbia who only use the Latin script.

“The question of political support for full use of the Cyrillic script has varied over time and depended on the current whims of the elites – ideological and pragmatic. The situation is the same today. A large part of the Serbian scientific community supports the passing of this law, that doesn’t delve into the private sphere of language users, but only regulates its official use,” says Dr Sokolović.

At the turn of the 20th century, many were quick to write Cyrillic off, but despite there not being any real resurgence the script is still alive and kicking.

But for how much longer? Time will tell. For now, there is still hope that Serbia’s dual-script system – unique among Slavic nations – will survive.

Songs they never play on the radio: Romania’s love-hate relationship with manele
Sightings of large carnivores in Hungary are becoming more and more common
Comment