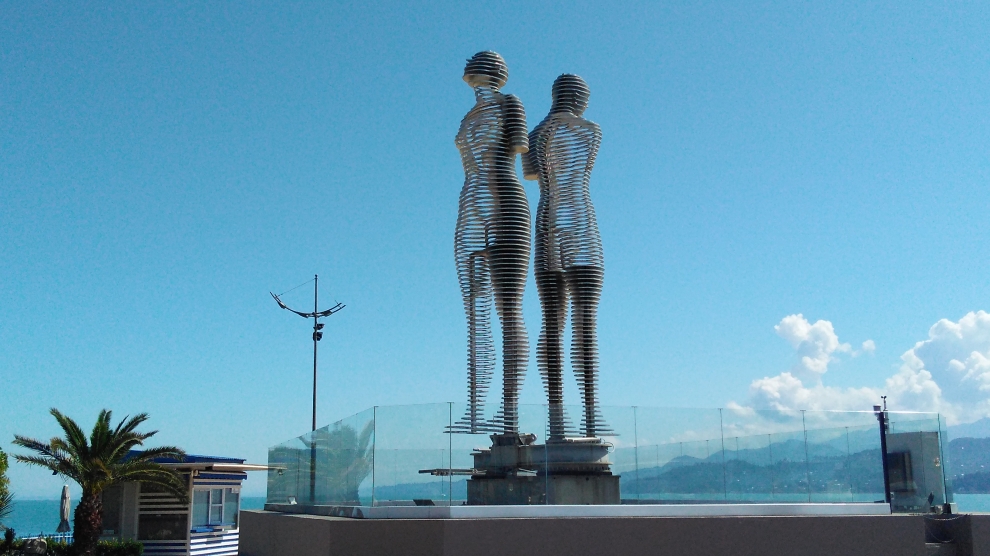 Officially, it’s still known as Man and Woman, the name with which it made its debut at the Venice Biennale more than a decade ago. To the people of Batumi, the city on Georgia’s Black Sea coast where it has since found a permanent home, it’s Ali and Nino.

To everybody who visits the city, it’s likely to be the abiding memory of their trip: a moving (in every sense of the word) statue which slowly brings two lovers together for a short embrace, only for them to part almost immediately.

Nothing is permanent, the statue suggests, enjoy the moment. It’s impossible not to stand transfixed, bewitched almost, before its tragic beauty, for the full 10 minutes it takes to complete the full cycle of coming together and breaking apart. And then you’ll stand there and watch it again. And again. It’s truly mesmerising.

A stunning example of concept, mechanics and design, Man and Woman is probably the best-known work of the Georgian artist Tamara Kvesitadze.

“People mostly associate it with love, so it stirs positive emotions within viewers. Anyone can interpret this monument as he/she prefers, yet the main message that my work conveys is that being together is possible for only a little time. This short period for someone might mean a whole century. This is the simple idea behind the sculpture,” she says of the statue.

But what of Ali and Nino?

Set mainly in old Baku, Azerbaijan, Ali and Nino is a sweeping novel of romance and adventure which tells the tale of Ali, a Muslim schoolboy from an aristocratic Azeri family who falls in love with Nino, a beautiful Christian girl with distinct European sensibilities. In order to be together they must overcome personal scandal, family blood feuds, World War I and the Bolshevik revolution.

In the end, they must choose between loyalty to their cultural beliefs and heritage, and ardent devotion to each other. They choose each other, only for Ali to die fighting the Bolsheviks as they advance on Baku.

Just as intriguing as the story of Ali and Nino is the mystery surrounding the novel’s supposed author, Kurban Said. When the book was first published in 1937, it was thought to have been written by the Austrian countess Baroness Elfriede Ehrenfels, as she was the signatory on the publishing contract.

However, research carried out some years later revealed that it was actually written by her friend, one Lev Nussimbaum, under the pseudonym Kurban Said.

Nobody is entirely sure how the story of Ali and Nino became associated with Tamara Kvesitadze’s statue. The artist herself never referenced the novel (which was made into a film by director Asif Kapadia in 2016).

However, she appears not to mind, and acknowledges that people have their own interpretations, which, she told the BBC last year, “I listen to and sometimes like.”

For her, however, it appears to be a more personal work.

“I designed it at a moment when I was hurt, so I wanted to make what was my idea of being together for a moment, with someone, and then you lose it,” she says.