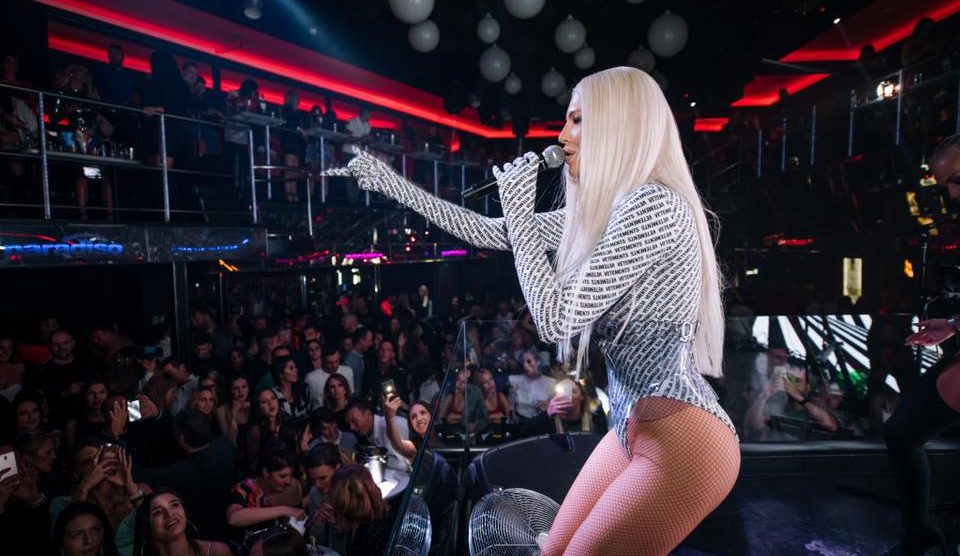 It’s been almost 30 years since turbo-folk emerged as the premier cultural product of the Western Balkans, and since then it has neither lost its popularity nor its infamy. Loved by millions, reviled by those who think themselves “elite”, it’s a genre that has for decades defined pop in the Western Balkans and South-East Europe at large.

Read on for five reasons as to why turbo-folk is actually great.

One of the main complaints against turbo-folk has always been a perceived lack of depth. The genre is painted as shallow and as musically and artistically uninteresting. But nothing can be further from the truth. Turbo-folk is incredibly diverse and over time it has picked up influences from everything from old folk songs to hip-hop and electronic dance music.

This has produced a rich variety of styles, that are all recognisably of the same lineage, but sound quite different from one another.

Take the outcrop of folk rap, a style that emerged in the 2000s with such artists as Elitni Odredi, among other things, pioneers of YouTube in Serbia whose popularity was achieved without the aid of traditional record companies.

For a more euro dance take on things, there’s Indira Radić’s Tetovaža, a track that would have easily won Eurovision had Serbia participated in 2003.

It might just be turbo-folk’s greatest strength and the reason behind its extremely strong staying power. Over time, it has subsumed so many influences into itself, that it’s maybe time to stop calling it a genre and start calling it what it is — a uniquely Balkan mode of making music in many different styles.

It’s origin story reveals much about the region

To find the origins of turbo-folk one must go back to the 1970s and the rise of so-called “new folk” music. In Serbia and elsewhere in the region, folk music refers to old standards, music whose composers and lyricists are unknown but which evolved over time through oral tradition.

Around the mid-1970s a new kind of folk emerged, keeping the style and feel of traditional folk but churning out new lyrics and new compositions. This “new folk” (or in Serbian novokomponovana muzika, newly composed music) emerged in the kafana scene with artists performing their music live. But soon, as record players became more commonplace, it entered the pre-recorded music market.

The Yugoslavian Communist party was not happy about it. Such records were marked as Schund (German for trash, see also the Yiddish shund, a literature term closely related to the English term pulp) and there were laws discouraging sales, at least in the beginning. Later, however, even state-owned record labels such as Diskos would start publishing new folk music.

It’s from this that turbo-folk would develop, much like new folk itself, in the kafanas of Ibar Highway, an infamous (because of all the DUI accidents) stretch of road between Belgrade and the Špiljani border crossing with Montenegro.

It’s hard to judge exactly when new folk was turbocharged into a genre that would become synonymous with the Balkans, but Ceca’s 1995 hit Nije Monotonija provides a good point of departure. It has all the hallmarks of a proper turbo-folk song. Clearly inspired by traditional folk but with a distinct eastern influence from Greece and Turkey, punctuated by guitar riffs and a pop-rock styling.

Most strikingly, Ceca dispenses with any and all romanticist influences, that were a major part of both traditional and new folk. Gone are references to such things and spring and flowers. Ceca speaks a modern (in the proper artistic sense) language — monotony and melancholy are addressed head on without any metaphor and there’s “chaos in the head” and “chaos in the soul.”

It remains controversial to this day

Last year, a Twitter user made waves when she criticised elementary school graduates for playing turbo-folk at a procession in her town (in Serbia, it’s tradition that fresh graduates of the eigth grade, and then later, high school, stroll around the block as part of the celebration). She especially took umbrage with the featuring of Seka Aleksić’s unforgettably sensual 2003 track Crno i zlatno.

“Nobody ever listened to turbo-folk in Vračar [a Belgrade inner-city municipality],” the Twitter user proclaimed, unleashing a kerfuffle that the tabloids ended up writing about for days.

What this whole debate exposed is that for many cultural and society commentators, turbo-folk was always seen as “rural” and therefore bad.

A divide between urban and rural is still a feature of Serbian society, with anything rural being almost exclusively coded as backwards and unsophisticated. In this constellation turbo-folk stands for the rural and the unwashed, and all the bad things that emerge from that.

Of course, there’s nothing wrong with being rural, but this charge doesn’t really stick in the first place. In its varied and diverse history, artists have come into the genre that represented the more urbane side of things.

Aca Lukas, singing about anxiety over a possible tryst with a woman through a tough guy down on his luck persona which wouldn’t be out of place in a Leonard Cohen song — is about as urbane as it gets.

As turbo-folk emerged into the popular consciousness in the 90s, along with the wars and the economic devastation, the left-wing of society in the Western Balkans, especially Croatia and Serbia, saw it as crude, vulgar, and base.

Other charges against turbo-folk included thinly veiled orientalism, a common refrain among these critics is that it “makes Belgrade sound like Teheran” revealing the belief that anything eastern is bad in and of itself. Even an entire conspiracy theory was earnestly promoted by many in the documentary programme All that Folk (which dealt with the history of turbo-folk), which purports that the Slobodan Milošević regime purposefully funded and disseminated turbo-folk as a sort of attack on the urbane and sophisticated but most importantly “European” culture of his enemies.

As thin evidence of this claim, the song Koka-kola, Marlboro, Suzuki by Viki Miljković, stating that “this is life, this isn’t an ad, nobody has it better than us,” is often referenced. A case of state propaganda or just a throwaway feel-good track in a sea of the calamities that were going in 1995?

Even the name “turbo-folk” was originally meant to be pejorative and was coined by Montenegrin rock artist Rambo Amadeus, who was very much against the genre.

None of these ideas really stick. But for many of those who thought and think themselves sophisticated, turbo-folk remains despised as the genre that killed rock’n’roll — an unforgivable transgression in their eyes.

The final nail in the coffin of the theory that turbo-folk is somehow nationalistic is, of course, its immense popularity across all Southern Slavic nations. The region agrees — turbo-folk is great.

Perhaps it’s a sign of artistic potential, actually, that turbo-folk was so demonised by those who consider themselves the gatekeepers of culture. All good music inspires opposition. Judas Priest were accused of subliminal Satanic messages that could be heard if their records were played backwards. In 1985, Prince’s single Darling Nikki sent Tipper Gore and other concerned busybodies into a frenzy that would culminate with the now-infamous Parental Advisory sticker.

Despite all the protestations, the people of the region have spoken and turbo-folk, in all its different incarnations and variations, remains the most popular type of music, from Serbia to Bulgaria and everywhere in between. Bulgarians especially have taken a liking to Serbian turbo-folk, with the “Serbian hits in Bulgarian” compilation on which Bulgarian artists cover the Serbian songs reaching more than a dozen installments. It’s available for purchase at all good gas stations.

Meanwhile, popular turbo-folk artists play to packed audiences at clubs across the Balkans, or at least they did, before the coronavirus pandemic.

In a region sadly known for bitter divides, turbo-folk is a common cultural thread and a reminder how much in common the different nations actually have.

Then there’s Ceca (whose real name is Svetlana Ražnatović), the “Serbian Mother” herself, whose life is absolutely screaming out for a biopic. The widow of Arkan (indicted by the International Criminal Tribunal for the former Yugoslavia for crimes against humanity before his assassination in 2000) she still enjoys immense popularity across the Balkans.

Simply put, the tracks are bangers

There’s something about turbo-folk that makes it incredible party music. Perhaps it’s the roots in traditional folk music that was always meant to be experienced in a group setting rather than alone.

It is very much the same with turbo-folk, as the music truly comes alive when heard at clubs, splavs, and weddings.

And here’s a secret about your cool and sophisticated friends friends from capital cities of the Western Balkans. When it’s 3am and the alcohol has been flowing freely, they are not listening to whatever Pitchfork has decreed as new and exciting, they’re vibing to some classic Ceca or Seka or even Indira.

Over time even those who originally would not have been caught dead listening to turbo-folk have changed their tune. In 2011, a festival provocatively titled “I love the 90s” shocked the liberal commentariat, but these days such parties, celebrating the “classic” turbo-folk and rap of the era are a common fixture in Belgrade’s clubs.

Not to mention all the contemporary turbo-folk, in all its different varieties, that’s played all the time and everywhere.

In line with the global music trends, the most popular type of turbo-folk right now is the rap and r&b version. For a look at what’s hot, all you need to do is switch YouTube’s region to any country in the Western Balkans and navigate over to the “trending” tab.

But for a couple of pointers here are Darko Lazić and Anid Čusić and Corona, the recent trending releases.

Love it or hate it, turbo-folk is here to stay. Once a maligned phenomenon, today it has informed an entire generation of musicians and artists who continue to evolve it and take it to new places. Diverse and creative, yet uniquely recognisable, turbo-folk is the region’s strongest cultural product and export.