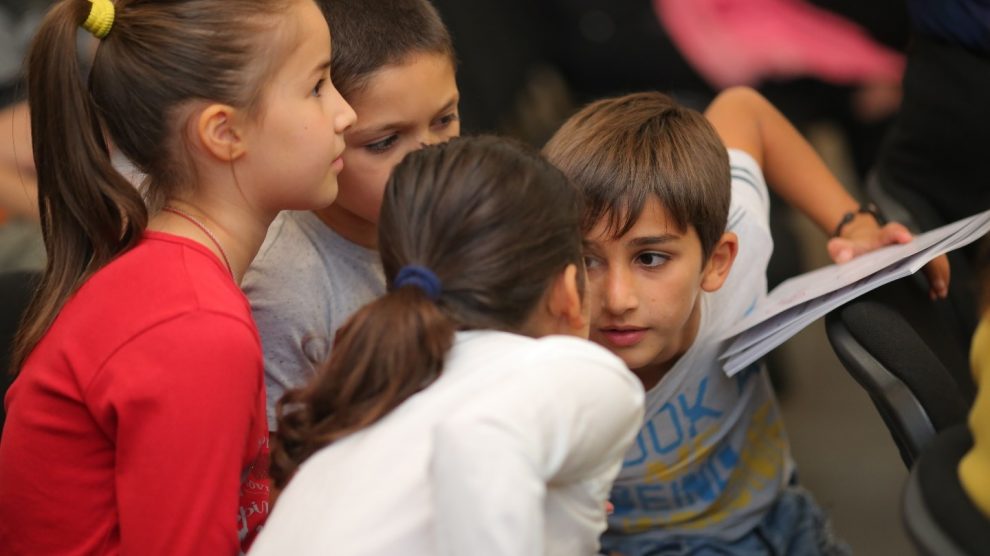 Just a few metres from Georgia’s heavily-fortified border with Russian-occupied South Ossetia, an Orthodox bishop is using culture – and his love for animation – to convince locals to stay.

In the Georgian village of Upper Nikozi, the destruction caused by war is still evident.

The village saw heavy fighting during the brief yet bloody conflict between Russia and Georgia in 2008, and now sits on the fortified border between Russian-occupied South Ossetia and the rest of Georgia.

Abandoned by many of its inhabitants both during the conflict and in the years that followed, renewed hope for its future has been offered by a Georgian Orthodox bishop, Isaiah (the ecclesiastical name of Zurab Tchanturia), who against all the odds has established an art school and international animation film festival in the village.

Tchanturia worked at an animation studio in the late 1980s before studying animation at the Shota Rustaveli Theatre and Film University in Tbilisi.

Nevertheless, after graduating in 1993, the shaky economy of newly-independent Georgia and the instability caused by civil war led him to pursue a very different path.

He briefly joined a monastery in Abkhazia – like South Ossetia another region of Georgia today occupied by Russia – but was one of almost 250,000 Georgians forced to flee the region due to fighting and ethnic cleansing.

In 1994 he became a monk, and later the bishop of the Nikozi and Tskhinvali Eparchy (an administrative division of the Georgian Orthodox Church).

In 2004, Bishop Isaiah set up several educational programmes in painting, reading and animation in Upper Nikozi. Alas, the village’s unique animated film studio was destroyed during the 2008 war.

“The war was destructive, our facilities were bombed, but it brought good as well. I thank the war for its involuntary kindness,” the bishop tells Emerging Europe.

“It was hard to imagine a festival in the village, as it was though no one would be interested. Yet every year the festival has managed to attract attention from various countries and the festival started to grow,” says Eter Glurjidze, the coordinator of the festival and a graduate of the art school.

The main goal of the facility was to help society deal with the stressful experiences of war and help the village maintain its population and become a regional socio-cultural hub.

“It is noteworthy that the children at the art school come not only from Upper Nikozi itself but commute from other nearby villages,” adds Glurjidze. “The school primarily functions as an educational facility, but at the same time, it creates a socio-cultural space that has helped decrease migration from the region. The school also tries to improve the resilience of society in spite of the insecurity and instability created by the Russian occupation.”

A reason to stay

The school and festival have achieved immense success through collaboration with foreign donors and renowned international festivals, and has convinced many families of the benefits of staying in the village rather than moving to the nearby city of Gori, where the government has established settlements for internally displaced people.

“Graduates of the school are successful: many continue their studies at the Tbilisi State Conservatoire or abroad,” adds Glurjidze. “The school deepened my interest in various fields. Having learnt foreign languages at the school I was able to further my education in China and Estonia. Now, I am happy to be personally involved in the development of the animation festival.”

One of the school’s biggest success stories is Giorgi Maghradze, who was studied folk music and piano classes before turning to the oboe.

“It was at the [Nikozi] school where I was introduced to classical music,” says Maghradze, now enrolled on a postgraduate programme in Switzerland. “Without it, I would not have become a musician.”

The story of Upper Nikozi is now even the subject of a documentary, Children of Nikozi, from filmmaker Nina Benashvili. It’s already won several awards, including the Bronze Remi at this year’s Houston International Film Festival.

“I watched the villagers, the bishop, the frequent guests prepare for the festival; there was a great sense of unity,” says Benashvili. “In awe I observed, filmed, and interviewed Nikozians old and young; how bravely they approached the uncertain future, how grateful they were for what little they had, and how warm heartedly they received everyone in a place where good and beautiful competes against war and destruction.”

Around 20 per cent of Georgia remains occupied, and Russian forces continually move the border fences that mark the territory they hold, simply lifting the barbed wire that separates South Ossetia (and Abkhazia) from the rest of the country and planting them further and further into Georgian territory.

Hundreds of Georgian citizens can therefore quite literally overnight find themselves in Russian-held territory, their farms and businesses uprooted, their land taken.

By creating the school and festival, Bishop Isaiah has managed to help the inhabitants of Upper Nikozi – which is just a few hundred metres from Russian-held territory – survive the difficulties and ignore the “creeping occupation”.

“Cultural activities are close to spirituality,” he says. “Art is a field where you can build bridges between people.”

Glurjidze says that raising awareness of the school and festival is paramount to helping the bishop achieve his goals.

“The added value of the school, along with the animation festival, is its ability to bring together the communities living on the two sides of the administrative border,” she concludes.

“I am sure [the art school] would be attractive for people living beyond the barbed wire.”