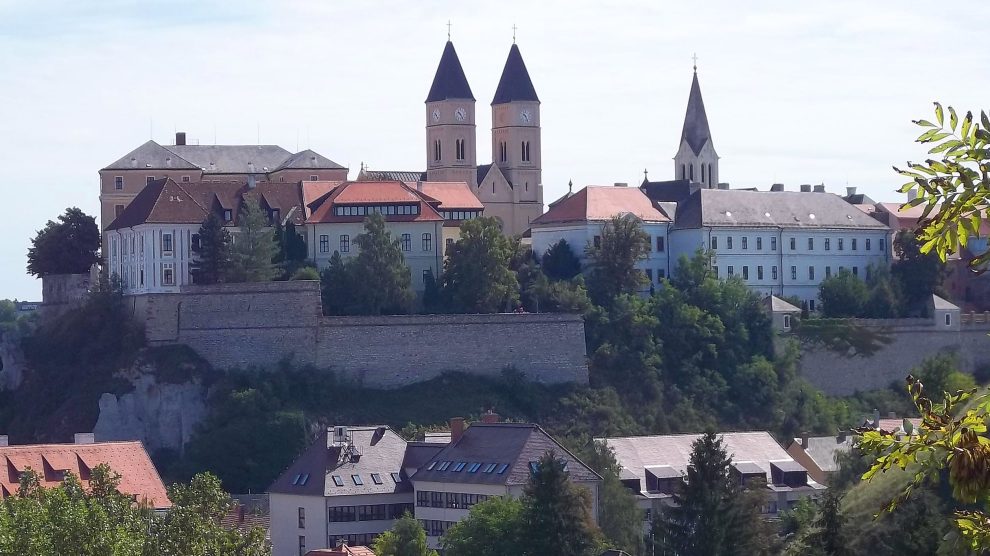 Two cities in emerging Europe will be European Capitals of Culture in 2023: Veszprém in Hungary and Timișoara in Romania. The first of the pair to kick off its cultural programme will be Veszprém, later this month.

Almost two decades ago I authored a guidebook to Hungary, and not the least among the many fabulous towns and cities I visited and wrote about was Veszprém, just over an hour by train from Budapest, and close to the northern shores of Lake Balaton.

I dug out that particular guidebook last year when I became aware of the fact that the town was about to become a European Capital of Culture for 2023 (along with Timișoara in Romania and Elefsina in Greece).

The site of the nation’s first bishopric, Veszprém is one of Hungary’s great historical towns. Spread over five hills, the most picturesque part of the town is the Vár (Castle District), but the lower town offers some fine Baroque architecture, great museums and quaint streets. The twin towers of St Michael’s Cathedral, visible from afar, are a symbol of Veszprém and of the Balaton and Bakony regions. Visitors need to fit to explore this town as many sights are at the top of long staircases or at the end of steep, cobbled streets.

The initiative dates back to 1985, when Melina Mercouri, Greece’s then Minister of Culture, and her French counterpart Jack Lang came up with the idea of designating an annual Capital of Culture – beginning with Athens – to bring Europeans closer together by highlighting the richness and diversity of European cultures and raising awareness of their common history and values.

Indeed, fully budgeted costing is one of the criteria that the EU’s selection committee uses to choose Capitals of Culture. Cities must show that they will be able to raise the money needed to put on a good show.  This of course begs the question: Is it worth it?

‘The city got a push’

By and large the answer is yes, although it does depend on what a city wants to get out of it. Those who view it as a vanity project are likely to be disappointed. It could also be argued that the Covid hangover that has led to three cities becoming cultural capitals each year (until 2024) has somewhat reduced the impact.

But there is no shortage of success stories, not least in the emerging Europe region. Sibiu in Romania was a Capital of Culture in 2007. The budget for the event was 56 million euros, of which more than two thirds, around 40 million euros, was spent on upgrading infrastructure.

The historic centre of the city was completely renovated, including its large central square. Museums, theatres, cinemas, and any culturally relevant venue were given facelifts, public transport was given an upgrade, and as one local puts it, “it just felt as though the city had been given a push”.

The event made a national figure of Sibiu’s erstwhile unknown mayor, Klaus Iohannis, who would seven years later become Romania’s president. While there are many, many other factors behind that, it’s doubtful his national profile would have been high enough to bid for presidential office had he not overseen such a successful year as a Capital of Culture.

Veszprém’s mayor, Gyula Porga, appears to understand that Capital of Culture success comes from thinking – as Sibiu did – long term.

“It is important to stress that the Capital of Culture identity is not just about the many programmes that take place throughout the year. Rather, it is about launching and strengthening long-term sustainable processes that will extend well beyond 2023,” he says.

“With this unique opportunity, the region will cement its position as a European cultural-creative region, with Veszprém at its centre.”

This regional approach is a key part of Veszprém’s programme. More than 120 small towns and villages in the wider Balaton-Bakony region will be hosting events, with special focus on what has been dubbed, “Fragile Balaton”.

A special Balatorium Ecology Festival will draw attention to the environmental challenges faced by the lake and its surroundings: the health of the region’s economy depends on the health of the lake’s ecosystem. Opportunities and expertise will be showcased that can help people move from being users of the landscape to becoming responsible custodians of it.

“Our aim for the European Capital of Culture programme is to draw national and international attention to the exciting milieu of the Veszprém-Bakony-Balaton region that is rich in opportunities, experiences and innovation,” says Aliz Markovits, CEO of Veszprém-Balaton 2023.

“The culinary offerings, unique vineyards of the Balaton Uplands and the genuine hospitality of the local people all contribute to the unusual density of good things that the region has to offer. We are convinced that the region’s potential deserves at least as much international attention as such world-renowned tourist and cultural destinations as Tuscany or Provence.”