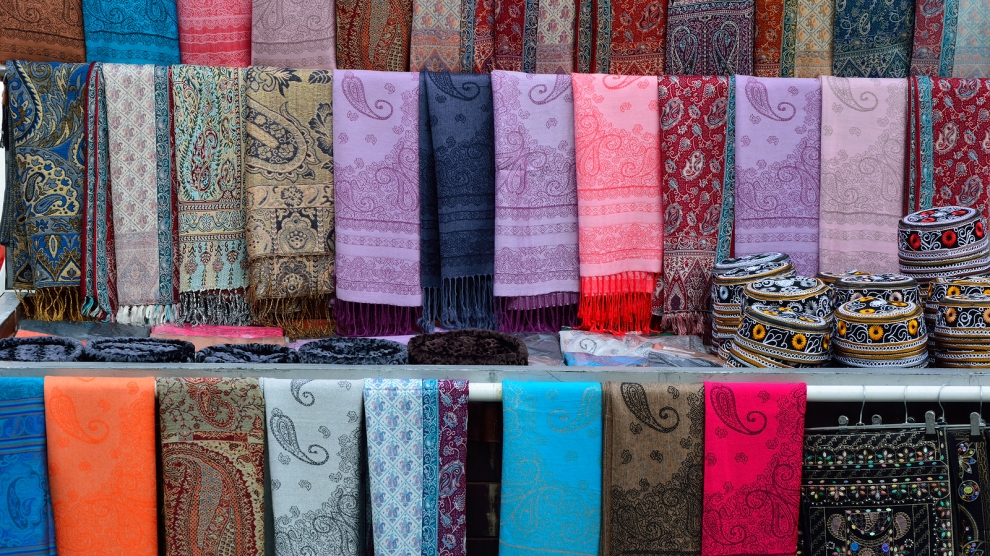 Around 160 kilometers from Baku, the capital of Azerbaijan, is a small village. Its narrow streets, paved with cobblestones and houses all built with the same stone are part of the country’s national heritage and are what attract visitors. The village, Basqal, has played an essential role in history. It was for centuries an important stop on the Great Silk Road, and became a key centre of the silk weaving industry. The local Demirchi bazaar still offers visitors a glimpse of what a Silk Road trading stop was like.

The name Basqal comes from a Turkish word meaning victorious fortress. Archaeologists believe that the settlement is at least 2000 years old. Its pivotal location and political, economic and strategic importance, meant that dozens of fortresses were built over the centuries to offer the village protection.

The houses in Basqal all have similar characteristics. On the first floor, there are utility rooms while the second floor is reserved for residential accommodation. Each building features layers of logs between the stone, a so-called seismic belt which makes the structure resistant to earthquakes.

Today, Basqal’s population is around 1,500. They speak in a dialect of the Azerbaijani language which is close to Tebriz and has a particular sound. The town once had five residential areas and was one of the first in the region to boast a sewage system, first built in the 12th century.

The name of Basqal remains firmly connected to silk manufacturing. Until recently, almost every Basqal house praticed silk-spinning, using techniques passed from generation to generation. The village is well-known for producing Azerbaijani national silk shawls – kalagayi. It is a light head covering, weighing around 125 grams and easily passes through a a wedding ring. Usually decorated with floral or geometric patterns along the entire edge or in the centre of the shawl, it was one of the primary attributes of women’s clothing. Red kalagayi were worn at weddings, black at funerals. White, cream and brown kalagayi worn for everyday use. Few visitors to kalagayi leave without buying several.

Their production takes weeks. First, the fabric is woven using silk threads before being cut into the desired dimensions, then it is dyed by the traditional method in large cauldrons filled with boiling water, before the silk is boiled so that the colours do not fade in the future. The cost depends on the number of flowers in the design and the complexity of ornamentations.

In Azerbaijan, silk fabrics were widely used in national clothing. In the first half of 19th century the fame of Basqal’s silk products went far beyond the borders of the country and in 1862 Azerbaijani silk was exhibited in London. During the Soviet era, several factories were set up and silk-production became the main activity of the local population. However, after the collapse of the Soviet Union, kalagayi went out of fashion. Their revival owes much to a renewed interest in national traditions.

Today, the Basqal Silk Centre, which has operated for several years and produces different silk products including kalagayi keeps the tradition alive. Besides silk production, the centre also hosts an interactive kalagayi museum, where visitors can familiarise themselves with the history and traditions of kalagayi, observe the silk manufacturing process and, sometimes, take part. One of the most ancient headdresses in the world looks to have a future, thanks to the desire of Basqal’s population to keep the past alive.