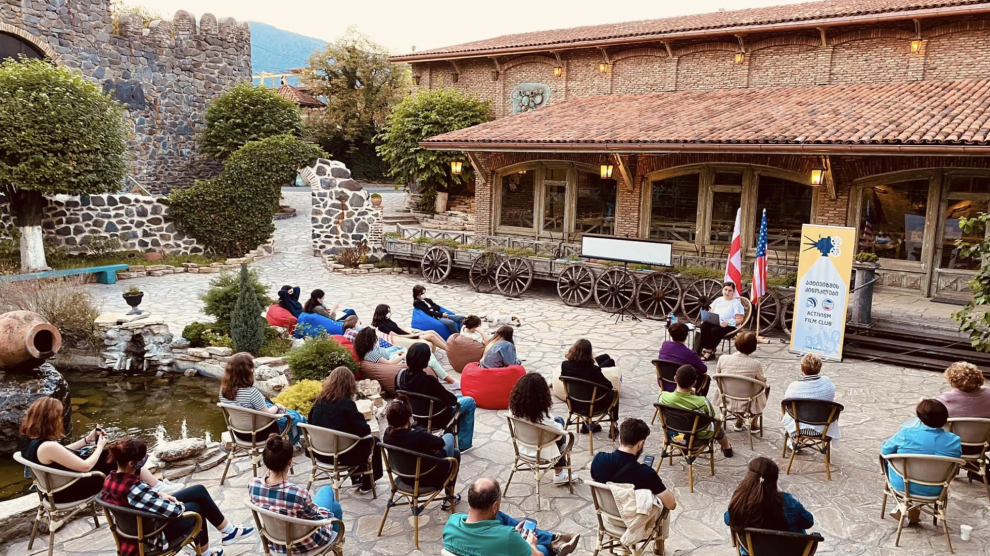 In the Georgian town of Kvareli, an NGO is following in the footsteps of one of its most famous son, writer Ilia Chavchavadze.

You may not be familiar with the Georgian town of Kvareli, in the east of the country close to the border with Russia, but you may have heard of its most famous son, Ilia Chavchavadze, a writer often referred to as the father of Georgia.

In the late 19th century Chavchavadze was part of a movement dedicated to spreading literacy across Georgia, establishing several schools all over the country and providing an education in Georgian, thereby halting the Russification policy of the Russian Empire.

Such a figure would no doubt have approved of EuroClub, a youth initiative in his home town whose mission is to provide Georgians with a space for open discussions, as well as relevant workshops and seminars on topics such as democracy, human rights, media literacy and the history and values of the European Union and the United States, as well as the educational opportunities available for Georgian young people.

Despite its location far from the centre of the country, the club has managed to attract many motivated youngsters and has garnered the praise and support of European and US diplomats in Georgia.

The idea for the club initially came from one of those Young European Ambassadors, Kvareli local Nika Gurini, who wanted to help develop his local community and support other young people in rural areas.

“When I was a schoolchild in Kvareli, there was nothing happening in terms of youth development,” he says. “After finishing university, I came back to Kvareli and saw that there were no civil society initiatives that could be a helping hand for local youngsters. I felt that I had to take action, help establish civil society in Kvareli and further its development.”

Inspired by Ilia Chavchavadze, Gurini dedicated the club’s motto – Ilia’s route to Europe – to the 19th century writer who did so much for Georgian culture.

In his speech, he remarked: “one very crucial aspect of our [EU-Georgia] relationship is people-to-people contacts. The EuroClub here is contributing to the same aim: to bring people together”.

The subsequent visit of Kelly C. Degnan, US ambassador to Georgia, was another significant step in the club’s development as she pledged her support and funding for an American educational hub.

The club has since become a focal point for Young European Ambassadors and civil activists, who travel to Kvareli to meet young people from the town and other local communities, sharing know-how and information, encouraging them to become more active.

Young European Ambassadors share common democratic values, paramount for the development of Georgia as well as the Eastern Partnership region at large.

“These youngsters are future leaders, and their work is essential for the development of civil society,” says Nino Turiashvili, a coordinator of the Young European Ambassadors initiative in Georgia.

“They raise awareness of democratic values, while their knowledge and experience drives social change.”

Under the framework of EuroClub Kvareli, an open-air cinema has been established where films on social and political issues are shown, followed by discussions with experts or civil activists.

EuroClub also encompasses the American Shelf – one of the 15 American spaces in Georgia – supported by the US Embassy, which provides information, resources and activities to help the community learn more about American culture and policy, the English language, and exchange opportunities in the United States.

The club has already implemented projects beyond Kvareli with the active engagement of Young European Ambassadors.

Under the framework of the project For Europe, Young European Ambassadors, along with foreign diplomats, have visited rural and mountainous regions of Georgia and conducted workshops with local youngsters.

Indeed, the club has been so successful that preparatory work is currently underway to create a regional EuroClub platform, not just in Georgia but across the Eastern Partnership region.

“EuroClub Kvareli has been so successful that it even continued its work during the initial phase of the Covid-19 pandemic, online,” Gurini tells Emerging Europe.

“It has captured the attention of youngsters across the country.”

And now, it seems, EuroClub is ready for export. Ilia Chavchavadze would be proud.