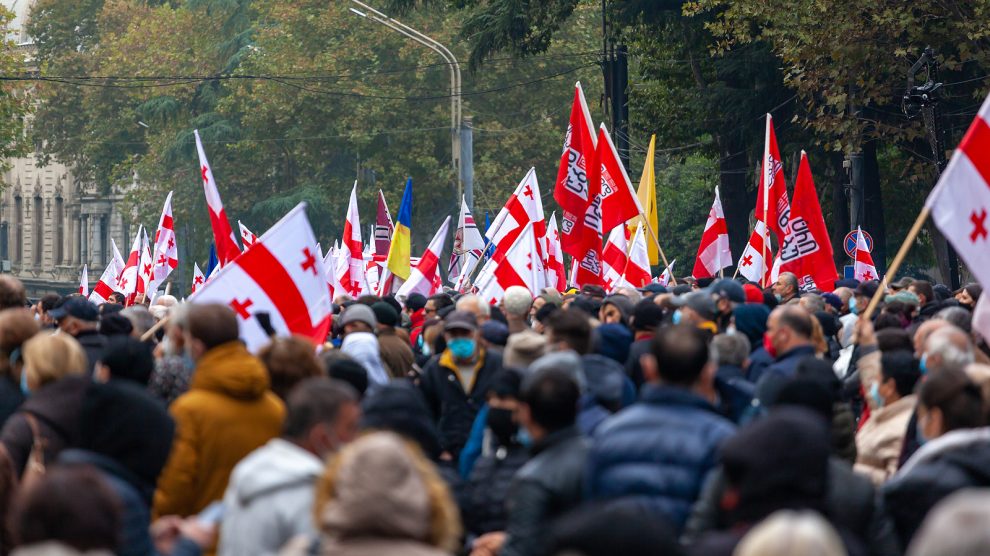 Georgia’s local elections – scheduled for October 2 – are this year about far more than mayors and local councils.

The stakes in Georgia’s upcoming local elections could not be higher, neither for the ruling Georgian Dream party nor the country’s opposition.

Under the terms of an EU-brokered deal that earlier this year ended months of political deadlock that followed last October’s parliamentary election, Georgian Dream agreed to hold another, snap parliamentary vote if failed to attract at least 43 per cent of support in the local ballot.

While the party has since then backed out of the deal, stating that no early parliamentary elections would take place before the next scheduled vote in 2024, it will nevertheless come under fierce internal and international pressure to call an election so should it indeed fail to make the 43 per cent threshold.

Much of the party’s bluster stems from the fact that it believes it will poll well above 43 per cent on October 2. However, a number of recent developments suggests its confidence might be misplaced.

On September 13, an anonymous leak of thousands of intercepted phone conversations shook Georgia.

Various media outlets received a website link to files of conversations transcripts that had been recorded by the country’s security services, the SSG.

Journalists who sifted through the many files on the website say that they chose to report only information of public interest, but admitted that there was also “a lot of private muck and smut” to be found.

It is not known just how much of the content on the website is authentic, but many of the targets of the surveillance have confirmed their veracity.

Much of what was leaked is centred around the clergy, as well as wiretaps targeting the media and civic activists.

Some media have reported evidence of sexual relationships between priests and underage girls and boys, while other files purport to identify dozens of priests of “non-traditional sexual orientation” as well as drug users, one of whom is reported to have “systematically” used drugs in his church.

Strikingly, no government official has denied the authenticity of the files, while journalists, clergymen as well as politicians have recognised their calls and conversations.

Some claim that even personal chats were amongst the files, raising concerns that personal spaces such as homes may be under surveillance.

“Governments usually wiretap missions of countries who they consider hostile. The Georgian government, similar to Russia, might be considering the West as a threat to its political system due to its support for democratisation,” says Giorgi Badridze, a senior fellow at the Georgian Foundation for Strategic and International Studies.

“This is because the party has repeatedly carried out actions that contradict democratic values and its stated pro-European foreign policy. It might be distrustful towards western countries – its strategic partners – and wants to know what parties and non-governmental organisations they are related to.”

After the wiretap revelations were made public, Georgian Prime Minister Irakli Gharibashvili remained sanguine, saying that, “the whole world is governed this way”.

Regardless, the government looked for culprits, and initially placed the blame at the door of Georgia’s largest opposition party, the United National Movement (UNM).

Even though the UNM, which ruled Georgia on and off from 2003-12, allegedly amassed its own surveillance database, the scale of the recordings gathered by the current ruling party appears to be far larger.

More recently, in a change of tack, Georgian Dream has shifted the blame to former Prime Minister Giorgi Gakharia, once of Georgian Dream but who resigned in February and is now the leader of a new opposition party, For Georgia.

They point to the fact that Gakharia’s team includes several well-placed former senior officials, such as Alexandre Khojevanishvili, a former deputy head of the SSG.

Support for the ruling party recently hit its lowest point since 2012. According to a recent poll, just 33 per cent of Georgians intend voting for Georgian Dream. UNM can count on around 25 per cent of the vote, with 10 per cent opting for Gakharia’s party.

By contrast, the ruling party received 48 per cent of the vote in last year’s parliamentary elections.

Its drop in support is likely directly linked to the rise of Gakharia’s party, as UNM’s poll ratings have been stable for some time.

“A large part of Gakharia’s support comes from a disappointed segment of Georgian Dream voters who would never vote for UNM or any other opposition party they see as linked to it,” says Ghia Nodia, founder of the Caucasus Institute for Peace, Democracy and Development.

“This is very damaging for the ruling party. It is why Georgian Dream is trying to link Gakharia to [former president Mikheil] Saakashvili, without any evidence.”

Linking Gakharia to Saakashvili is not the only method being used to discredit the former PM.

On September 6, Tbilisi Mayor Kakha Kaladze, the former AC Milan footballer who is running for re-election, took a drug test and called on Gakharia to also get tested.

This turned into a series of accusations. The chairman of Georgian Dream, Irakli Kobakhidze, claimed that the former prime minister had “drug addiction issues”, calling him “a cokehead unworthy to waste one’s time on”.

The ruling party has also changed its rhetoric over a crackdown on anti-government protests in 2019, when Gakharia was interior minister. He was made prime minister shortly afterwards.

On September 17, in an interview, Gharibashvili said that innocent people had been treated inhumanely and blinded on Gakharia’s orders. “This is his trademark, his way of ruling,” said Gharibashvili.

But Ghia Nodia says that this is an awkward way of attacking Gakharia.

“It is absurd given that Georgian Dream fully stood with Gakharia and soon promoted him to the prime minister’s position.” he says.

The return of Saakashvili?

As for Saakashvili, the leader of the so-called Rose Revolution of 2003 who twice served as president but who has been in exile for years – mainly in Ukraine, he continues to insist that the EU-mediated deal remains in force, saying that the local elections “are a referendum on (the Georgian Dream founder Bidzina) Ivanishvili’s removal from power”.

Earlier this week he posted a photo on Facebook of a plane reservation to Tbilisi for Saturday evening.

“I will be in Tbilisi to protect, together with you, your electoral choice,” he said in a video address on the social networking site.

Garibashvili responded by saying that if Saakashvili sets foot on Georgian soil, “he will be immediately arrested”: in 2018 Saakashvili was sentenced to six years in prison by a Georgian court for abuse of office.