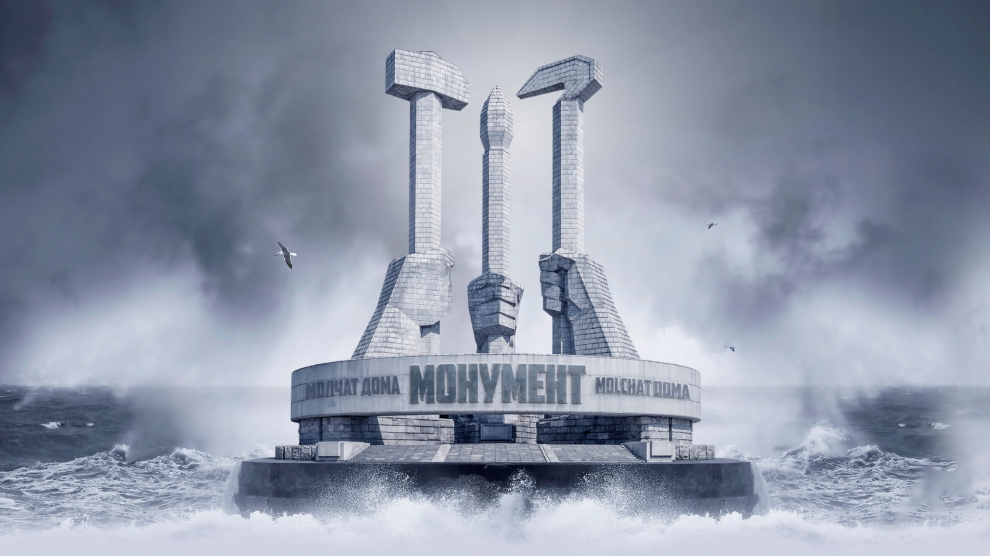 But that’s more or less exactly what happened in late 2018 and throughout 2019, when Molchat Doma’s post-punk industrial sound captured the attention of the “doomer” and “doomerwave” generation who eagerly featured the band’s songs in their popular YouTube playlists.

A portmanteau of doom and zoomer, doomers are a loosely defined group of young people who feel a disillusionment with life and anxiety over such societal problems as climate change. So, in turn, the doomerwave music aesthetic favours a sound that will be very familiar to those who grew up on such bands as Joy Division and The Cure, two bands that Molchat Doma is often compared with.

Following a similar trajectory to many other internet phenomena, Molchat Doma’s popularity went from underground appreciation, to memes, and then to a degree of mainstream recognition in the span of less than two years.

First the doomerwave playlists, then in November 2019 Hugo Boss used На Дне from the band’s sophomore album Зтажи. And by May of 2020 another song from the same album, Судно, had gone viral on TikTok, with 106,000 thousands clips featuring it.

Music really did transcend national borders this time, with mostly young audiences around the world finding something very appealing in Molchat Doma’s heavy and dark yet eminently danceable sound. Many Western music critics have noted the similarity of Molchat Doma’s sound with that which emerged during the bleak Thatcher years in the UK.

For their part, the band members of Molchat Doma stay away from politics most of the time, but they they did contribute a song to the For Belarus charity album raising funds for the Belarus Solidarity Foundation.

Still, that doesn’t mean there isn’t a wider social context to consider. The sounds of post-punk and Molchat Doma do seem shaped by the reality of contemporary Minsk and Belarus. It’s no surprise that the region’s brutalist buildings feature heavily in the band’s visual iconography.

And while the band has toured Europe, they do note pointedly in their Spotify biography that they are “still flying under the radar” in their native Belarus. In part, possibly, because music censorship is alive and well in the country with the concerts of those thought to be politically problematic often cancelled due to “logistical difficulties”.

Yet, it would be wrong to reduce the band’s international appeal merely to the gloomy Slavic aesthetics (seen in such memes as Squatting Slavs) and the strange brutalist buildings.

It’s clear now that 2020 will be the defining year of today’s youth, but things weren’t so great before the pandemic either: climate change, pollution, shaky political situations in many of the world’s countries — the West included. Whether today’s youth is battling the last European dictator in Belarus or is just very anxious about the future, the sentiment of Molchat Doma’s oeuvre clearly resonates across borders.

With the band now signed to the Brooklyn-based Sacred Bones label, getting across those borders is likely to be much easier going forward.

Molchat Doma may be the best-known band to emerge from the Belarusian post-punk scene, but they are not the only ones to get international attention and signed to a foreign label.

Around the same time that Molchat Doma were honing their gloomy goth stylings, Dlina Volny was going in a similar but a lot more pop-infused direction.

This could be why they caught the attention of Italians Do It Better, the independent label started by the similarly disco-inflected US band Chromatics.

Beneath the sound they call “pop brut” Dlina Volny have a political message. Their latest single Whatever Happens Next openly supports the people of Belarus who want a new, free and fair presidential election. And they are using their new international audience to send the message.

“There are going to be people who don’t know. And the world has to know. What we see happening in Belarus at the moment is absolutely terrible. All we want is to be free of that regime,” the band says.

Whatever happens next, the band is now working on their next album which they promise will be even more cinematic and with lyrics in English.

With everything that’s been going on the world, it seems that gloomy Belarusian post-punk might be the most fitting soundtrack of our times.

Let’s just hope it’s the time that passes and the music that remains.

Where was Young Wallender filmed?
Latvia celebrates a century of filmmaking
Comment