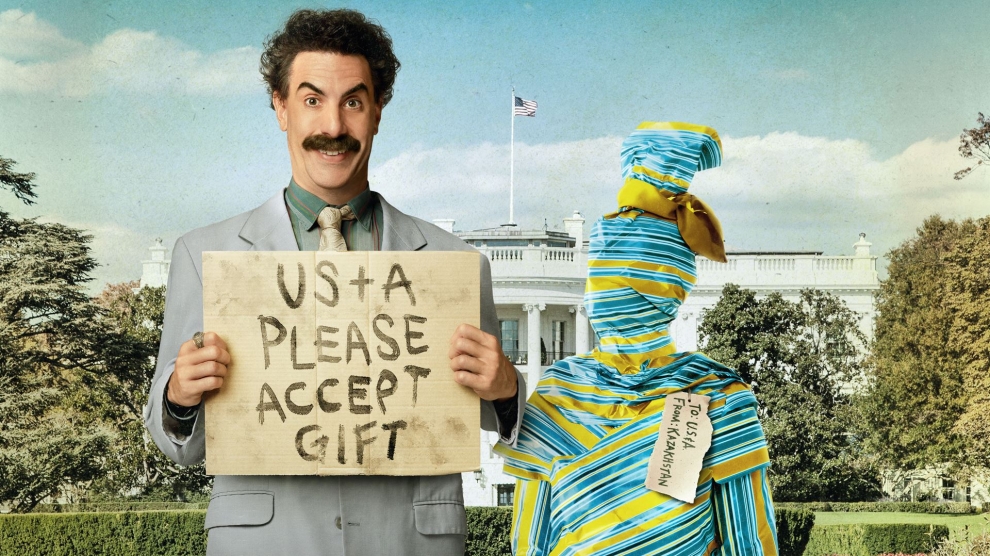 In 2005 Sacha Baron Cohen put Kazakhstan – the home country of the fictional character Borat Sagdiyev – on the map, with the release of his hugely successful film Borat: Cultural Learnings of America for Make Benefit Glorious Nation of Kazakhstan (usually referred to as simply Borat).

Not my words, but those of Erlan Idrissov, a former Kazakh ambassador to the United Kingdom. He was not alone. Kazakh Foreign Minister Yerzhan Kazykhanov would even attribute a rise in the number of tourists travelling to the country directly to the film, stating his “gratitude” to Baron Cohen for “helping attract visitors to Kazakhstan.”

And yet Kazakhstan’s take on Borat was not always complementary. The country’s government at first denounced the film, with the Kazakh foreign ministry at one stage threatening to sue Baron Cohen, and taking Borat’s Kazakh-domain website, borat.kz, offline. The country also launched a multi-million US dollar Heart of Eurasia campaign, disputing some of the film’s claims and buying advertising space in the international media to present the country as modern, stable and outward-looking.

In November 2006, Kazakh TV personality Jantemir Baimukhamedov travelled to London with the stated aim of presenting Baron Cohen with horse meat and horse urine, which were claimed by Borat to be the national food and drink of Kazakhstan, although he was unable to organise a meeting with him.

With a new Borat feature, Borat Subsequent Movie Film, now streaming on the Amazon Prime platform, Kazakhstan, perhaps remembering the old adage that any publicity is good publicity, has dropped the victim act, going so far as to adopt Borat’s catchphrase – Very nice! – for a new tourism campaign.

“Kazakhstan’s nature is very nice. Its food is very nice. And its people, despite Borat’s jokes to the contrary, are some of the nicest in the world,” says Kairat Sadvakassov, deputy chairman of Kazakh Tourism.

The idea for the campaign came from American Dennis Keen, who travelled to Kazakhstan on a high school exchange, then studied with a Kazakh professor at Stanford University. He now lives in Almaty, where he gives walking tours.

That attitudes in Kazakhstan have changed so much that the by now rather nauseating Borat is not worthy of condemnation, instead seen as a figure of fun who is not laughing at Kazakhstan but laughing with it, at the US as Baron Cohen originally intended, is no bad thing. It’s a sign that the country has developed a thicker skin, that it has come of age.

Not that all Kazakhs are happy. The Kazakh American Association has slammed the film for promoting “racism, cultural appropriation and xenophobia”. In a letter sent to Amazon, the group asked: “Why is our small nation fair game for public ridicule?”

Having watched the film, which is terrible, it appears that it is Baron Cohen (who can be a fine actor: he was excellent in the Netflix series The Spy, and is very good in The Trial of the Chicago Seven), who is heading for public ridicule.

The film’s central premise is that Borat, who spends much of the film in disguise, has brought his daughter Tutar to the US as a sexual gift for a senior politician – a diplomatic gesture that he hopes will restore his homeland’s alpha male reputation in America’s eyes.

It’s puerile, and while it does occasionally reveal the prejudices of those it ostensibly sets out to satirise, laughs are few on the ground.

Critics have generally panned it.

“For the most part, Subsequent Moviefilm is despairingly threadbare stuff,” wrote Robbie Collin in The Telegraph. “A string of half-formed, recycled and disjointed pranks you suspect wouldn’t have survived the quality-control process on the original, effortfully connected post hoc by largely uninspired scripted scenes.

“The central pillar of Borat’s act – interviews with unsuspecting strangers – is hugely impeded by the lockdown conditions under which much of Subsequent Moviefilm was shot, which surely goes at least some way towards explaining the agonising lack of strong material.”

Don’t waste your time watching it. Visit Kazakhstan instead.