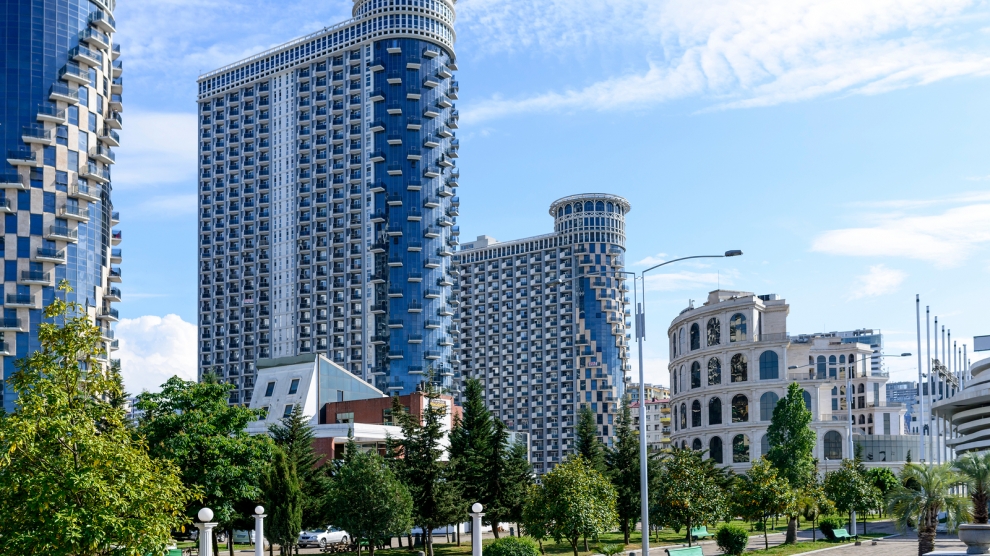 Very excited about my first ever visit to Batumi I am on my way to catch my train. But unlike in all the other places that I have visited, the railway station in Tbilisi is completely hidden on the top floor of a shopping mall with nothing indicating its location. At least not in English. Is it that bad that they would rather not show it, I thought, elbowing through the crowds and pulling my suitcase. Georgian Railways (GR) is clearly proud of its Stadler trains, as its adds this bit of information pretty much everywhere: on its website, the schedule and the tickets, when you buy them online. I eventually reach the platform and there I see her: a massive modern train with six double-decker carriages. And yes, Stadler’s logo too.

I approach the train attendant, say hi and show my mobile phone with a pdf ticket. She says hello but I can’t figure out whether she uses the “hellow” GR welcomed me with when they sent me the ticket by email. This will be an expedition, I think to myself, as I get on and look for my seat. The schedule and the ticket indicates the ride to the seaside city of Batumi from the capital will take five hours.

We start moving and I soon realise that travelling about 50 kilometres an hour it is going to be a long journey indeed. The first class carriage, where I am sitting, is comfortable but I am not sure my fellow passengers are familiar with the concept of quiet zones on trains, especially the couple with three extremely noisy girls, the sixty-plus blonde lady with a Chanel hand bag in her lap over-enthusiastically gossiping on the phone for far more than four hours; or the gentleman who watches a few episodes of his favourite show on loudspeaker, which I am able to follow despite wearing earphones myself.

It’s after 11pm when we eventually reach the Black Sea resort. I am picked up by a driver who somehow — despite the chaos of what seems like hundreds of people on the platform — identifies me without me spotting my name printed out and we soon drive along the coast with open windows because of the heat.

I pull out my phone to take a few pictures of the illuminated buildings and a big wheel, all flashing like Christmas tree lights. The driver’s companion notices my move. “It’s beautiful, huh?” he asks. “It’s very colourful,” I respond.

Batumi, one of the oldest Georgian cities — founded in the 8th century – is the country’s second biggest city, and a tourist and gambling destination. More than a decade ago, this Las Vegas of the Black Sea, or Monte Carlo, as more aspirational government officials would prefer to draw comparisons with, was a corrupt and crime-ridden city, run by a local clan. When President Mikheil Saakashvili came to power after the 2003 Rose Revolution, he vowed to win back the region that was cut off from the rest of the country. The president succeeded and both Batumi and the entire Adjara Autonomous Republic have become a model for how once-breakaway territories can be reintegrated and made to prosper. This is particularly important as, once reintegrated with the rest of the country, the stray republics of Abkhazia and South Ossetia, could be developing as well as Adjara.

That development is clear here in Batumi, where new buildings are springing up like mushrooms. Plenty of international hotel brands have already set up shop, taking advantage of the boom in tourism — according to preliminary statistics, in the first five months of 2018 saw some 500,000 foreigners visiting Batumi, a third more than in the same period of 2017.

It is a mid-September morning and I take a walk towards the beach and across the Old Town, where I am staying. Dozens of Thai massage shops, hundreds of money exchange points and thousands of small restaurants make you see they are all ready for more business. Happy that I found my favourite mushroom khinkali (I couldn’t refrain from eating a few despite having had breakfast a couple of hours earlier), I pass by the cute new Venice-San-Marco-like piazza, where I watched an amazing performance of the Georgian National Ballet and Batumi Ensemble the evening before and head towards the city hall to meet the mayor.

I leave Batumi in the evening on a Turkish Airlines flight back to London with an 11-hour layover in Istanbul. It is a shame that there are hardly any direct flights to Batumi, and Georgia as a matter of fact, from the UK — Georgian Airways flies to London a couple times a week only, Wizz Air flies every day but only to Kutaisi, which is 140 kilometres from Batumi. Despite the challenge of getting there, I am glad I have visited this Pearl of the Black Sea, regretting my stay was so short and looking forward to coming back to explore it more.