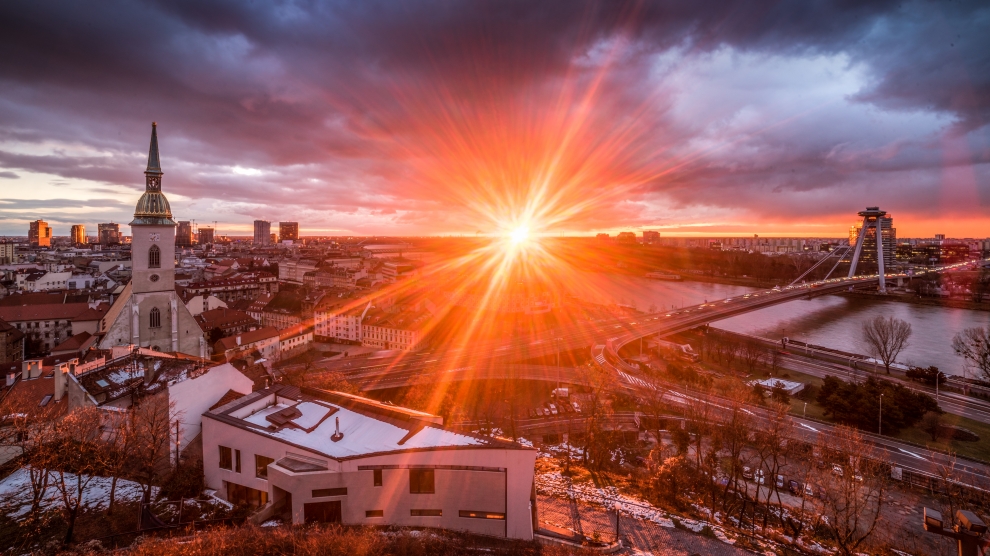 The Slovakian capital Bratislava is often overlooked as a tourist destination, ignored in favour of Vienna, Prague or Budapest. When you get here, however, it’s not long until you realise that the city has an unmatched charm all of its own that in many ways eclipses those of its better-known, and more frequented, neighbours.

In short, Bratislava is one of Central Europe’s most underrated capitals, offering a unique experience for those who like to stray from the tourist hotspots.

Stunningly set along the mighty Danube, Bratislava’s cityscape boasts a historical cross section of architectural styles. The old town is lined with intricate baroque buildings, set on cobblestone streets centuries old. Modernist towers loom over the city centre, offering breathtaking views, while it’s also worth doing as I did and venturing out to the city’s largest suburb, Petrzalka, lined with communist-era apartment blocks. Each of these areas offers a particular experience and has a story to tell.

At this time of year the old town is a fairytale winter wonderland. I decided against tripping the light fantastic on one of the ice rinks in the city centre, but now regret not making the most of the opportunity. I did experience up close the stunning architecture of the 19th century Cathedral of St Martin and the iconic Bratislava Castle, reconstructed by Queen Maria Theresa in the 18th century, before heading to the more unconventional Franciscan Chapel on (where else?) Františkánska Street that features The Queen of Angels painting – a 30 square metre work of art that is quite rightly considered one of the world’s finest late baroque pieces.

I was lucky enough to eat some fabulous Slovakian food at two of the best restaurants in town: Zylinder and Leberfinger. Both excel in rich, flavoursome dishes perfect for recovering from the cold weather outside. The whole roast duck at Leberfinger, served with roasted cabbage and traditional loksha pancakes is a treat.

Alternatively, take a walking beer tour through the historical centre: you might even get to ring so-called ‘Beer Bell’ at St Michael’s Gate, which once used to sound last orders. I didn’t, unfortunately.

To experience the best of traditional Slovakian and international art, both the City Gallery of Bratislava and the City Museum of Bratislava are well worth a visit. Fans of modernism will love the Constantin Bauer exhibition currently at the City Gallery’s Mirbach Palace, which runs until March. Constantine Bauer is one of the most important representatives of Košice modernism, his work focusing on social problems and misery in central Europe at the end of World War I.

There is more modernism at the Danubiana Museum of Modern Art and the Nedbalka Gallery are notable sites of artistic focus, and stunning displays of architecture in their own right; the Danubiana is situated on a peninsula in the middle of the Danube. I loved its sculpture gardens, despite the weather which was more conducive to indoor sightseeing.

For the ultimate panoramic view of the city, both the UFO Tower and Kamzík TV Tower offer spectacular views of the old town and beyond. I chose the UFO Tower, as its closer to the city centre. I was told that during the summer an urban beach operates underneath. It certainly wasn’t beach weather during my visit.

My last stop in the city was the Petrzalka neighbourhood, once dubbed the Bratislava Bronx. It’s a must-see. What once was a grey concrete jungle of communist-era apartment blocks has been transformed into a colourful masterpiece. Blocks are now coloured in geometric cubist designs that are noth simple and sophisticated. Subtle palettes and complementary shades work harmoniously together to highlight the particular feature of the buildings, many of which are modernist works of art in their own right. This residential district is the most densely populated anywhere in Central Europe and it is well worth exploring the intensity of life and colour it has to offer.

Getting around Bratislava was easy on public transport. The Bratislava City App offers offline access to information, maps and attractions. To save money, the Bratislava Tourist Card is a great option, offering free entrance to 14 museums, unlimited public transport, free tours and other discounts for just 18 euros for 24 hours, or 25 euros for 72 hours.

Diverse, accessible and unique, I adored Bratislava. I’ll be back.