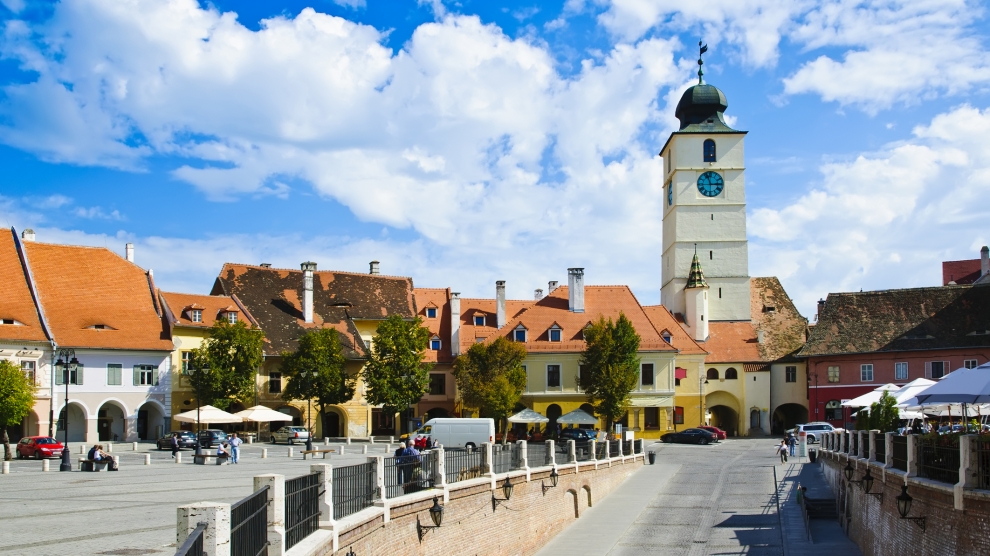 Sibiu is the envy of just about every other city in Romania. Boasting a gorgeous central square lined with beautifully-renovated medieval houses, the city offers a chance to experience a multicultural Romania once thought lost forever.

If Transylvania is the best of Romania, then Sibiu – founded in the 12th century by Saxon settlers – is arguably the best of Transylvania. Home to Romanians, Saxons and Hungarians, this melting pot of cultures is where Orthodox, Protestant and Catholic churches happily co-exist, often quite literally side-by-side. The city – neglected for much of the 20th century – has seen a renaissance in recent decades, and was a European Capital of Culture in 2007, the first Romanian city to hold the honour. One of the descendants of its Saxon founders is Romania’s current president, Klaus Iohannis, credited with overseeing the city’s revival during his time as mayor.

While Transylvania is never more picturesque than when covered in snow, winter can be bitterly cold and often grim. The moment spring arrives however, Sibiu heads outside and stays there until winter returns: eating, drinking and most cultural events are all done al fresco. Sibiu hosts the European Council in May, the main event of Romania’s presidency of the Council of the European Union.

Sibiu’s international airport is served by flights from across Europe. It’s a short taxi ride from the city centre. From the city’s train station it is just a 10-minute walk (albeit uphill) to Sibiu’s magnificent central square, Piața Mare.

Piața Mare (quite literally, the Big Square) is indeed grand, in every sense of the word. Its colourful medieval houses all have narrow, distinctive windows set into the roofs that suggest beady eyes watching all below. The Brukenthal Museum (once the home of the city’s finest son, Samuel Brukenthal) is home to a fine collection of Old Masters, while the splendidly linear Catholic church (where the president, whose wife is Catholic, worships most Sundays) vies for attention with the 13th century Turnul Sfatului (Council Tower), whose steps can be climbed for fabulous views of the entire city and the usually snow-capped Fagaraș mountains beyond. Free of traffic, cafes and restaurants with enormous terraces offer fine local food, and there are concerts and festivals most spring and summer weekends. 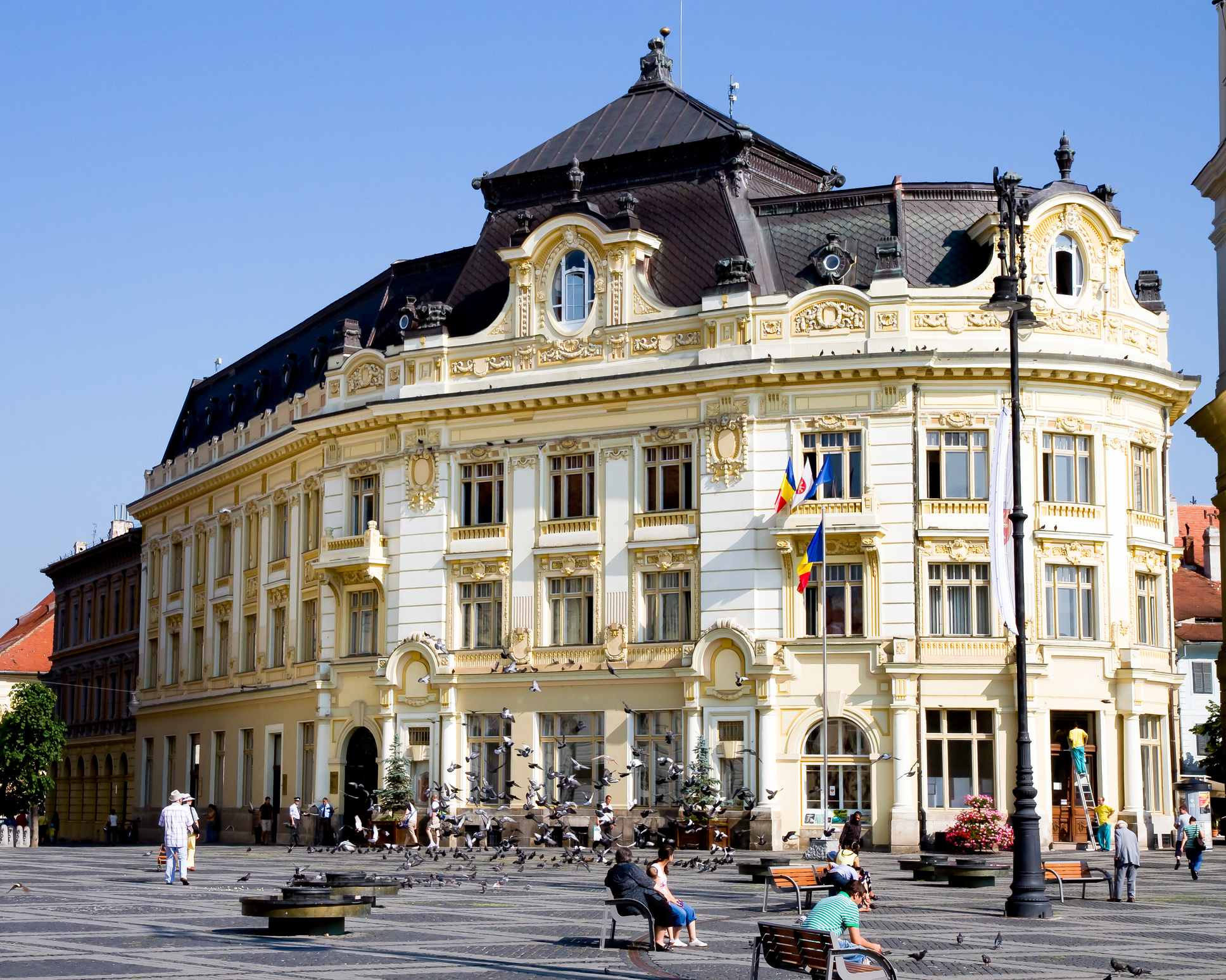 Behind Piața Mare is a smaller square, known as Piața Mica (yep, you guessed it, the Small Square). Again, just about every house is home to a café, restaurant or bar. There is also the rather bonkers Ethnographic Museum, created to house the eclectic collection of explorer Franz Binder who spent decades in Africa collecting antiquities and fine art. In 1862 he donated the lot to the city, at a stroke creating the first real museum of non-European art in Transylvania. A few doors down Kulinarium offers great local food (you will need a reservation at the weekend), while the Casa Luxembourg is one of the best guest houses in the city, complete with elegant rooms and views over Podul Minciunilor (the Bridge of Lies). Today packed with tourists taking selfies, legend has it that less-than-reliable merchants would in the past use the bridge to sell goods of questionable provenance.

Pedestrianised from start to finish and perfect for evening promenades, Strada Nicolae Bălcescu links medieval Sibiu with the newer part of the city centre. The faded grandeur of the Imparatorul Romanilor hotel still attracts many visitors, and its split-level rooms are somewhat unique if not quite as luxurious as they once were. Casa Frieda offers equally agreeable accommodation, and great local food on a sublime street terrace. Take a detour a block or two south to visit Sibiu’s magnificent Orthodox cathedral, built in 1906 in neo-Byzantine style and one of the most eye-catching Orthodox churches in the country. Strada Nicolae Bălcescu ends at Piața Unirii, dominated by the enormous Hotel Continental. On the southern side of the square are remnants of Sibiu’s old city walls.

A tram once ran from Sibiu’s suburbs to the small town of Rașinări, and you can follow the now abandoned tracks on foot or bike towards the Dumbrava forest (there is a bus, number 22, for the less fit). The open-air Astra Museum is a wonderful skansen where well-preserved houses, churches, windmills, workshops and farm buildings from across Transylvania provide a fascinating insight into regional traditions and folklore. Allow a full day here: there are two good restaurants within the museum. Opposite, the Sibiu Hilton is the city’s finest hotel, complete with large swimming pool and superb restaurant. A further half an hour up the road (either by taxi or by bus) is the mountain resort of Paltiniș. Long a retreat for writers it today offers skiing in winter and gentle hikes in summer.

Romania’s most famous road, which crosses the Fagaraș mountains and reaches 2042 metres at its highest point was completed in 1974 and made famous by an episode of Top Gear a decade ago. It has since become one of the country’s most popular attractions. The 25-kilometre drive up the most spectacular part of the highway, from Cârțișoara to the lake at Balea, takes around 45 minutes, although at weekends – when half of Romania’s cars drive the route – it can take double that. There are a number of small memorials to those who worked (and died) on the road, but the main stopping point on the way up is Balea Cascada (the Balea Waterfall). A cable car from here runs to lake Balea which during the winter (when the road beyond this point is closed) is the only way up. There is no scheduled public transport from Sibiu (or indeed from anywhere) up and over the highway, so you will need to hire a car.