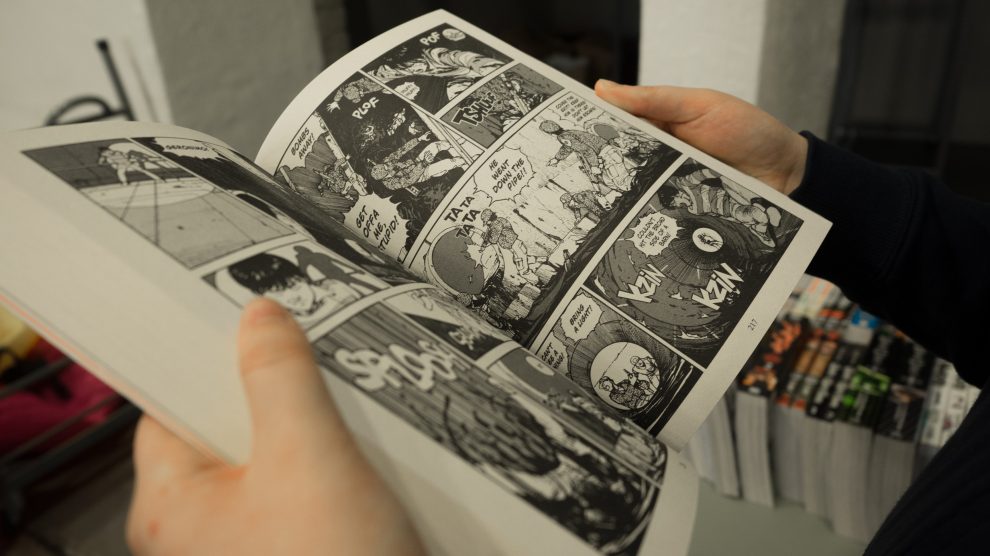 When most people think comic books (or graphic novels, if you want to be fancy about it) they think Marvel and superheroes. Or alternatively, the European canon of such greats as Enki Bilal and Moebius.

Often missing from discussions on graphic novels are authors from emerging Europe, which has for decades had a vibrant and interesting comic book scene.

Sadly, many of these works have not yet been translated into English or other languages. This is slowly changing however, and here are five excellent graphic novels from authors in the region that anyone interested the medium absolutely should not pass up.

Adventures on a Desert Island

Called by reviewers a “comic one either loves or hates”, Adventures on a Desert Island is third graphic novel by Polish author Maciej Sienczyk.

A man wakes up from a bad dream and finds a diary and starts to read about a person setting off on a journey to Africa. But what follows is not a typical adventure on the high seas or colonial narratives about exploration and riches.

A desert island full of mystery, for sure, but of a different type. As the characters are stranded following a tsunami that wrecks their ship they begin telling each other stories of strangeness and mystery.

In this way, Sienczyk uses the narrative framing device to explore issues of fate, destiny, and the human condition.

With a distinctive drawing and writing style, veering between long-form text with illustration and traditional graphic novel, Adventures of a Desert Island is an unusual and exciting work that will appeal to all who are looking for a more mature and literary take on the graphic novel.

Published in English in 2007, Regards from Serbia is a collection of comics and e-mails by Serbian comic artist Aleksandar Zograf made during the 1999 NATO bombing campaign against Serbia.

Regards is not the first time Zograf has dealt with the subject of war in former Yugoslavia. His previous works Bulletins from Serbia and Life Under Sanctions also deal with the events around the break-up of Yugoslavia and the civil wars of the 1990s.

True to his style, Zograf combines ripped-from-the-headlines cartoons with personal, often humorous, observations. Of course, unlike classic war correspondents who seek the headlines out, the headlines came to Zograf as he was based in Pančevo, the site of a bombing of a petrochemical plant whose environmental implications are still ongoing.

In addition to the comics themselves, the volume also contains Zograf’s e-mail correspondence with friends and acceptances all over the world as well as some comics made before the bombing, during the Bosnian War.

Regards from Serbia is a deeply personal work detailing the impact of the Yugoslavian wars on the common person and their sense of security and humanity.

It’s geopolitics made human, and and invaluable resource to those who are interested in the personal and private aspects of war and the events of the 1990s in the Western Balkans.

Why beat around the bush? In most artistic mediums, women’s voices are often marginalised and unheard. The same is true of graphic novels, which over the decades have established themselves as a predominately male sphere, both in terms of authors and readership.

And yet such a perception is not true. Women both make and read graphic novels, and Double Portrait, a collection of twenty stories by various female authors from Poland, is proof of that.

It’s the first (and hopefully not that last) anthology that centres on women’s voices. Many of the stories are fiercely autobiographical, revealing gripping stories about childhood, adolescence, as well as daily struggles and joys, thus painting an intimate portrait about the life of women in Poland.

This doesn’t mean there isn’t a political aspect to the whole thing, as some of the stories are underground anarcho-feminist works reminiscent of the storied and long-running all-female Wimmen’s Comix anthology.

Through a diverse and vibrant group of authors this anthology offers an interesting look at contemporary Polish life, told from a female perspective.

The Invisible Man from Sarajevo

From Aleksandar Brezar and Boris Stapić comes an adaptation of a short story from Bosnian author Karim Zaimović. Widely considered one of the most talented young writers in Bosnia, his life was tragically cut short by the Bosnian War. Zaimović was killed in 1995, aged 24, just a few months before the Dayton Peace Accords would bring an end to the fighting.

The Invisible Man from Sarajevo is a meta-fiction narrative with clear autobiographical elements, as it is presented as a story told by Zaimović himself during one of his wartime radio broadcasts.

Mixing in real historical events such as World War II with a narrative about a man who turns invisible, this volume will appeal to those who like magical realism and stories that are a bit on the weirder side.

Best of all, the English translation of this comic is available online to be read for free.

Comics of the New Europe: Reflections and Intersections

The last entry on this list is not a comic book itself, but an academic work detailing the history of comics in countries that were “behind the Iron Curtain” such as Romania, Hungary, and Yugoslavia.

Bringing together various scholars from around the world, the books examines the often ignored and unexamined area in comic studies, the comic scene and authors from Eastern Europe.

For those who see comics as not just entertainment but serious art, this collection of essays will serve as an excellent look into how comic authors from the region fit into the larger cultural context of Eastern Europe.

Comics of the New Europe also pays attention to transnational connections along the themes of nostalgia, memoir, and life under communism.

It details how a new generation of Eastern European comic artists are looking forward, inspired by European comics from Belgium and France, and looking backward to re-examine not just their national past, but also their own identities and experiences following the fall of communism in the region.

M’Dee, the young Kazakh singer set to take the Russian-speaking world by storm
The charitable reason a Romanian referee asked Erling Haaland for an autograph
Comment