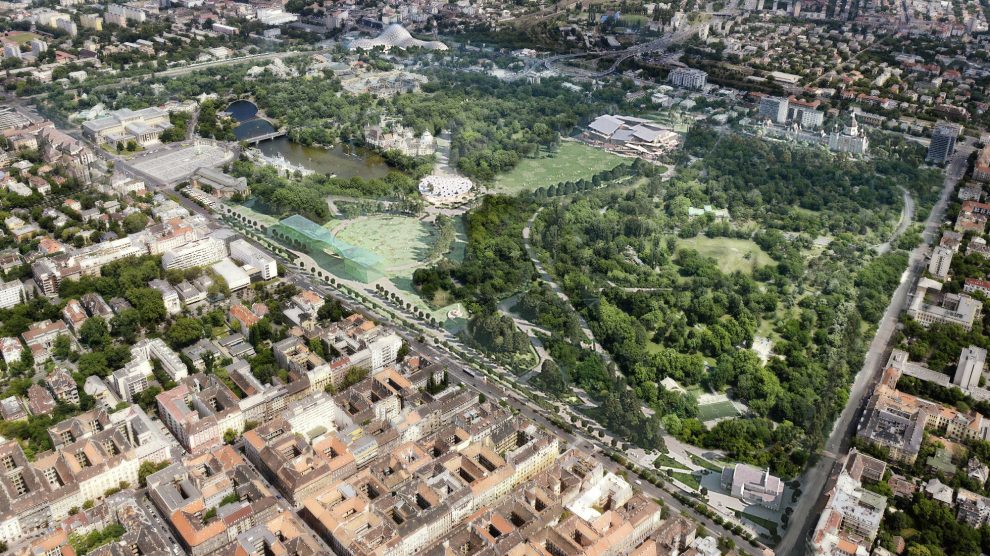 Városliget, or City Park, is Budapest’s most iconic park. Home to the Széchenyi thermal baths, Vajdahunyad Castle, an enormous outdoor ice skating rink as well as both the Hungarian Museum of Fine Arts and Budapest’s Hall of Arts, it has long been one of the city’s major attractions.

Since 2018 the park has been undergoing major redevelopment and modernisation. At a cost of around one billion euros, the Liget Budapest Project is one of Europe’s largest ever efforts to redevelop a cultural space.

The project has already seen the renovation of the ornate, neo-renaissance 19th-century Olof Plame House, now the Millennium House, repurposed as an events centre, the overhaul of the Mihály Mőcsényi Botanical Garden to include a running track, playgrounds and underground parking, and is now entering its final phase: a number of new constructions, including Hungary’s New National Gallery.

The project has not been without controversy. Initiated by the Fidesz government in 2011, it has been criticised by local environmental organisations and activists for what is seen by some as unnecessary construction upon Budapest’s green spaces.

The project’s developers however have responded by stating that the newly designed structures will be built upon what are at present empty parking lots, and that the park is to become greener following the restoration.

In 2019, Budapest’s liberal mayor Gergely Karácsony, who made environmental preservation a key part of his election campaign, showed support for the renovation of the park while also attempting to block the construction of new buildings.

One of the most ambitious and impressive aspects of the project is the construction of the New National Gallery.

This brand-new modernist building will host the collections of both the current Museum of Fine Arts and the Hungarian National Gallery, currently located in Buda Castle.

The building has been designed by the renowned Japanese architectural firm SANAA (Sejima and Nishizawa and Associates), also responsible for the Serpentine Pavilion in London, the Christian Dior building in Tokyo, and the Louvre-Lens Museum in France.

The contemporary building is to replace the communist-era Petőfi Csarnok concert venue, demolished in 2017.

The New National Gallery was originally slated to open in 2023. It will be Hungary’s largest museum, but as the official design was approved just last month, it is unlikely that the spectacular building will be open to visitors on schedule.

On the other hand, the architecturally unique House of Hungarian Music, designed by Sou Fujimoto is almost complete, with only the interior left to be finished.

The most distinctive aspect of Fujimoto’s design have to be the close to 100 holes throughout the building’s white roof that allow natural light to freely enter its upper floors, and, more impressively, the trees which protrude grow through part of the structure.

While the house will place a strong emphasis on Hungarian music, it will also feature a permanent exhibition exploring the history of sound and music since the dawn of humanity.

The Museum of Ethnography

Another grand project in the City Park – and also still in the construction phase – is the Museum of Ethnography.

Budapest’s Museum of Ethnography was founded in 1872 and has since been housed in several of the city’s historic buildings, but as the museum’s collection has now outgrown all of them, a new, permanent home was needed.

The distinguishing aspect of the new museum building is its arc shape, and its lowest point will provide a point of entry and exit to and from the whole park. The international tender for the design was won by the Hungarian architecture firm NAPUR.