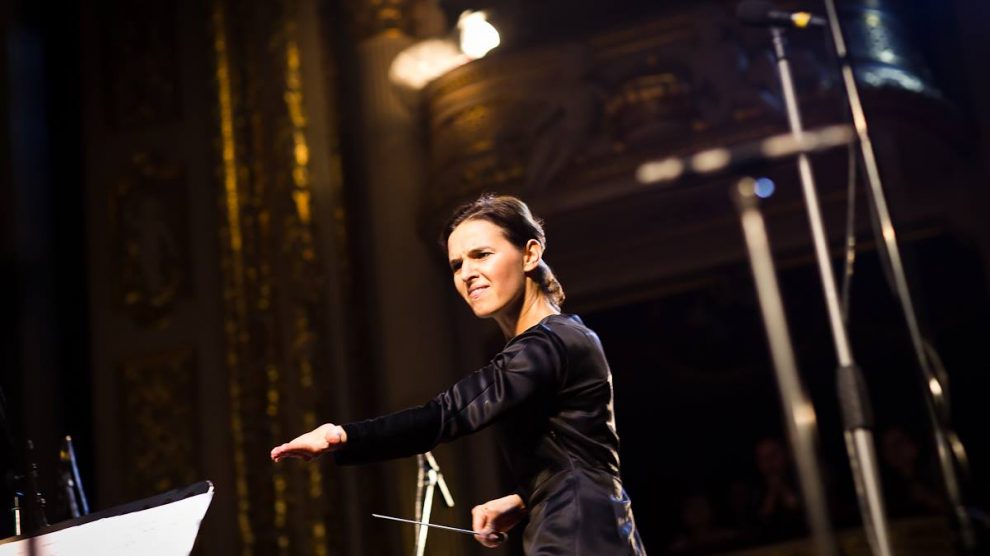 Ukrainian conductor Oksana Lyniv was the first woman to open the Bayreuth Festival. She is now set to become the first female conductor of an Italian opera house.

Oksana Lyniv, a native of Brody, a town in western Ukraine, has since January been the new musical director of the Teatro Comunale di Bologna in Italy.

The 44-year-old conductor is the first female conductor ever appointed as musical director of an Italian opera house.

And it’s not the first time that Lyniv has been a trailblazer.

She was born into a family of Ukrainian musicians in 1978, during the last, stale years of the Leonid Brezhnev era. She studied at the Lysenko Music Academy in Lviv, where she was seen as a prodigy. She first conducted an orchestra at the age of 16, and first came to public prominence as an assistant conductor at the Lviv Opera before moving abroad to continue her studies in Germany.

Even though Lyniv has spent the past two decades building her career in Germany, she has continued to work in Ukraine, as associate chief conductor at the sumptuous late-19th-century Odesa National Opera.

“When I started studying to be a conductor, I was the only woman at college. Over and over again, I was told: ‘Why do you want this? It’s never going to work out’,” says Lyniv.

“But I felt drawn by the profession. What attracted me was never the conductor’s podium itself, to stand upfront and tell everyone which way to go. It was and is always about the music, the composers’ works. Conducting Tchaikovsky’s Sixth, or Puccini’s Tosca, Wagner’s The Valkyrie or Mahler’s symphonies — that was really important to me, that really intoxicated me, and it has always encouraged me to continue on my path.”

The Ukrainian star’s rising reputation as one of the world’s most prominent classical music figures was considerably enhanced in 2017 when she became the first female chief conductor of the Graz Opera and the Graz Philharmonic Orchestra in Austria, a position she remained in until 2020.

Lyniv also worked as an assistant to the current chief conductor Berlin Philharmonic, Kirill Petrenko, when he was at the Bavarian State Opera.

Wagner would be proud

Lyniv once again made international headlines in July 2021 when she conducted the Bayreuth Opera Festival.

In the more than 140 years since the Bayreuth Festival was first launched by Richard Wagner himself in 1876, the iconic annual event had never before featured a female conductor.

After conducting Wagner’s Flying Dutchman, Lyniv was met by warm and vigorous applause from a star-studded audience, which included then-German Chancellor Angela Merkel and her husband Joachim Sauer. Merkel’s reaction to seeing a woman at the podium for the first time was simple: “Finally!”

Katharina Wagner, the great-granddaughter of Richard Wagner and the festival’s outgoing director, stated that there had been few female conductors in the past to choose from, but that Lyniv was part of a new female generation “courageous enough” to conduct.

“It’s very special to be the first woman to conduct at this magical place,” said Lyniv prior to her performance.

“Richard Wagner has written women into his operas with leading, action-packed roles and has portrayed them as very emancipated. That is why I believe he would be proud that almost 140 years after his death, a woman will bring his wonderful music to life for the first time.”

Several weeks after her German success, Lyniv entered the history books of classical music once again, this time in Italy. Her first outing as conductor at the Teatro Comunale di Bologna took place in March 2021, yet without an audience due to Covid-19 restrictions. Two months later, however, she returned to the Italian city, where her miraculous performance secured her the position as musical director.

“I have the honour and responsibility to become the first woman to be invited to become the musical director of one of the most important Italian state theatres, in a country where classical music has an extraordinary history that is felt in every corner and is an integral part of the national culture,” she says.

In December 2020, she was recognised as the Conductor of the Year at Germany’s prestigious Oper! Awards. Recently, Lyniv also received the novel honour of a Barbie doll in her likeness created especially for the Odesa exhibition, Dreamers and Inventors.

Parallel to her international career, Oksana Lyniv is passionately committed to the development of classical music in Ukraine, thus playing an important role as one of the most important figures in the country’s cultural landscape. She is now widely considered its primary cultural ambassador to the world.

In 2016, Lyniv established the Lviv MozArt International Classical Music Festival and has been leading it successfully ever since.

Also that year, on her initiative the Youth Symphony Orchestra of Ukraine (YsOU) was created, the first and only youth orchestra in Ukraine, uniting talented young people from all over the country. The orchestra has developed into a powerful platform to support young musicians from all of Ukraine’s regions and has performed brilliantly both in Ukraine and abroad.

Last October, Lyniv acquired one of the most important awards of her career, when she was named as the recipient of the 2021 Saxon Mozart Prize, together with her Youth Symphony Orchestra.

Bologna, however, is her biggest prize yet.

Fraud, corruption, and misuse of EU agricultural funds a major problem in CEE, say MEPs
Poland is home to CEE’s most competitive IT sector
Comment