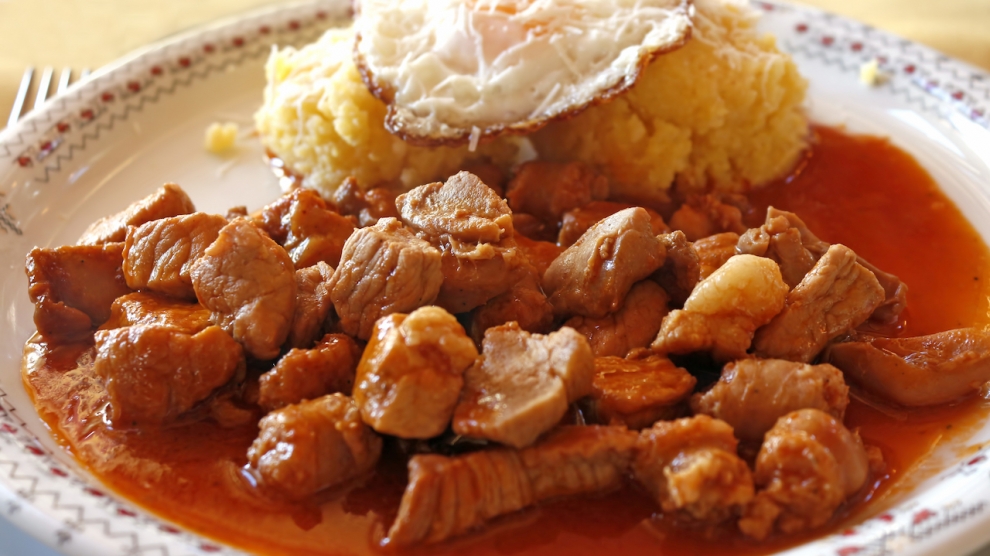 For me, food is not just a basic human need but also a cultural act, and the way it is prepared expresses the identity of the people who eat it.

Romania has been long been at the intersection of many customs and traditions and its food has been influenced by other nations. In the Daco-Roman period, the Romans brought the pie, or plăcintă. The Turks brought meatball soup and cabbage rolls. The Greeks came with their well-known musaca and the Bulgarians taught us how to cook vegetables in a wide variety dishes, for instance vegetable stew. The Austrians gave us the recipe for schnitzel and the Hungarians lent theirs for gulașh. We must also not forget other cuisines such as German or Serbian and Italian. But there is one dish that was and remains typically Romanian.

Romanians were shepherds but the Roman invasion forced the population to retreat and move to the mountains and hills, in order to be able to defend themselves and to not become Roman slaves. In the mountains they bred sheep, ate lamb and drank sheep milk. They had to find an alternative to wheat — and so discovered millet, which grows in regions with poor soil. From the millet flour they made bread and porridge, named mămăligă, which is a word of Dacian origin — mam-mulo, meaning satisfy hunger.

With more than 1,000 years of presence on the Romanian table, mămăliga is one of the most typical traditional dishes in Romania and Moldova, and it is similar to the Italian polenta. It is said that the reason why “mămăliga“ became so popular in Romania is because the Ottomans put taxes only on wheat and the corn, so it remained the most nutritious alternative for the people.

Soon after America was discovered, and maize was found there and brought to Europe, it replaced millet. It is widely known that maize requires heat and humidity to grow and the Danube Valley in Romania was, and still is, one of the most ideal European regions for the crop. In the 17th and 18th centuries, it even saved the country from an economic crisis. The “mămăligă” phenomenon was confirmed in 1873, in the Larousse encyclopaedia: “mămăliga s. f. boiled corn meal, in the Danubian principalities.”

Today, Romania is among the top ten world producers of corn, together with Ukraine, Spain,

and Russia and it is just behind the US, China and Brazil. In the European Union, Romania ranks first with a total area of 8.6 million hectares, accounting for some 30 per cent of the EU’s production.

But let’s come back to mămăliga. Traditionally, it is cooked by boiling water, salt and corn meal in a special iron pot called a ceaun or tuci. Since mămăliga can be used as an alternative to bread the Romanian and Moldavian cuisines both have dishes that are based on mămăligă or that include it as an ingredient or side dish.

“Mămăliga” can be cooked in many different ways. In the peasant style, it is used as a bread substitute and is much thicker than the regular Italian polenta, because it has to be cut into slices, like bread; it is cut into slices with a string and eaten, held in the hand, like a normal slice of bread. It can also be cooked much softer, sometimes almost with the consistency of regular porridge, or pan-fried as slices in oil or fat. One can add butter, cheese, sour cream or other ingredients.

The most popular dishes are based on mămăligă, or which are served with it, are: sarmale (a type of cabbage roll with minced meat) which is served with mămăligă, sour cream and chilli peppers (fresh or pickles); bulz: “mămăligă” with butter, sour cream and “branza de burduf” roasted in the oven.  Brânză de burduf is a salty type of cheese made from sheep’s-milk. It has a strong flavour and a slightly soft texture; the mixture of cheese is placed in a sheep’s stomach, that has been carefully cleaned, or in a tube made of pine bark. It may be served with eggs, bacon or ham. Finally, there is balmos, an old Romanian shepherd’s speciality dish with butter, sour cream, different types of cheese and mălai (maize flour) boiled in sheep’s milk. However, today only a few people know how to cook it.

Mămăliga is a fat-free, cholesterol-free and high-fibre food that can be used as a healthy alternative to more refined carbohydrates such as white bread, pasta or hulled rice.

In order to understand Romania one has to understand mămăligă — food that is so simple, so readily available, and so affordable that even the poorest person in the country can afford it. We even have an expression that says: one is really poor if one doesn’t even have mămăligă to eat.