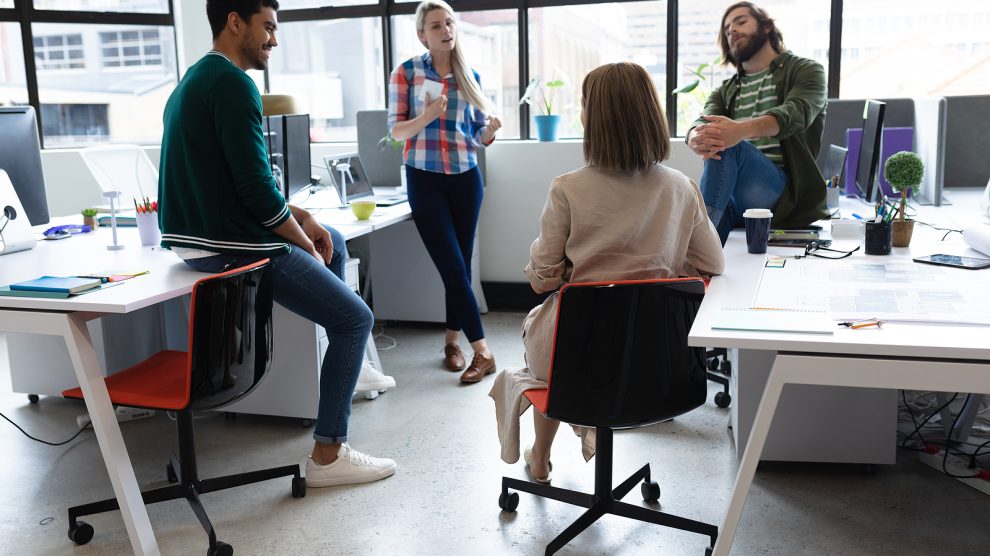 After the Covid-19 pandemic shattered the status quo in the world of work, Central and Eastern Europe is more open than ever to the idea of a four-day work week.

The Czech advertising company bnt.agency has been on a four-day schedule for over two years, and has reported increased productivity across the board.

This is in line with the findings of many organisations around the world – as well as some governments – which have chosen to chop a workday from the calendar but keep the same workload and the same pay.

Proponents of the idea claim that a shortened working week leads to greater employee productivity, higher overall morale and a healthier work-life balance.

A rapid increase in remote work during the Covid-19 pandemic ushered in a culture shift towards flexible arrangements, in the process also reigniting the discussion around compressing the working week to just four days.

And yet, there are some who believe that the solution works to the competitive disadvantage of companies, which become less available for their customers. Some workers may also feel forced to cram more work into a tighter schedule, which can be particularly stressful if they are already working at full tilt.

According to Jan Jelínek, founder and creative director at the Prague-based ad firm bnt.agency, the company’s overall productivity has risen by 60 per cent following the introduction of the four-day schedule, while revenue per employee has increased by 18 per cent.

At the same time, the cost of running the agency has dropped by 14 per cent and the time spent in meetings has decreased by 17 per cent.

“We are super happy about the four-day week,” Jelínek tells Emerging Europe. “On top of all the business matters, it has had a positive impact on our mental health as well as our lives in general.”

“We introduced the shortened working week because we thought that if we had more time for ourselves and for our loved ones, we would be happier and therefore more productive.”

Jelínek, however, is also quick to point out that it’s not all roses, and that the compressed week leaves employees with no room for excuses or missed deadlines.

“We have to be very disciplined during the week in order to deliver our work on time. This increases the pressure on everyone in the agency,” Jelínek says, adding that it all comes down to putting in the effort where it counts.

“The whole point is to work smarter, not less. If you work smarter, you can eventually work less. And if you just work less, you simply do less work,” Jelínek explains.

According to Jeremie Bertolino, bnt.agency’s CEO, the agency also introduced the four-day work week to motivate other businesses to do likewise.

“We wanted to inspire other companies to challenge the century-old working pattern. The world now has access to sufficient knowledge and technologies to work according to a different, more up-to-date rhythm,” Bertolino tells us.

Approved by the trade unions

Elsewhere in emerging Europe, companies switching to a four-day week are still few and far between, but trade unions from across the region have been advocating a more widespread implementation of the concept.

“The Polish workforce is one of the most overworked among all OECD member states, and so naturally we support all trends that would result in decreasing the working time in Poland,” says Piotr Ostrowski, vice-chairman of the All-Poland Alliance of Trade Unions.

“A shorter working week does not reduce efficiency. On the contrary, a well-rested employee is much more creative and motivated. He or she is also much less likely to have an accident at work,” Ostrowski tells us.

Marek Lewandowski, press secretary at Solidarity, Poland’s best-known trade union, claims that technological advancement is another argument in favour of the four-day week.

“Given our ageing societies as well as our increasing reliance on technologies such as artificial intelligence or robots in manufacturing, the need for human work is more than likely to decrease over time,” Lewandowski says.

“But rather than resort to any blanket solutions, we ought to consider each and every industry independently. The best way to effect a positive change in this regard is through a mutual dialogue between employees and employers,” Lewandowski tells Emerging Europe.

Still work to be done

According to Karolina Jurczak, job market expert at HR consulting company Sedlak & Sedlak, the key thing is to balance the trend with the needs of local economies.

“In spite of all the benefits of the scheme, a shortened working week could have adverse effects on the efficiency of work in some places, and that could lead to a drop in GDP,” Jurczak tells Emerging Europe. “It’s absolutely crucial that we strike the right balance between this initiative and the well-being of our economy.”

In a recent report on the four-day work week schedule, British multinational HR company Hays Poland said that wide-scale acceptance of the compressed work week in Poland was still a relatively distant prospect.

“A shorter work week could bring about increased employee productivity,” Aleksandra Tyszkiewicz, executive director at Hays Poland, says in the report. “And yet, it is still not possible for all companies in Poland to implement a four-day work week in the foreseeable future.”

“This pertains especially to all workplaces where continuity is paramount, such as healthcare facilities or logistics. More often than not, to be able to shorten the work week in such places, employers would need to make profound organisational changes and hire more people,” Tyszkiewicz concludes.