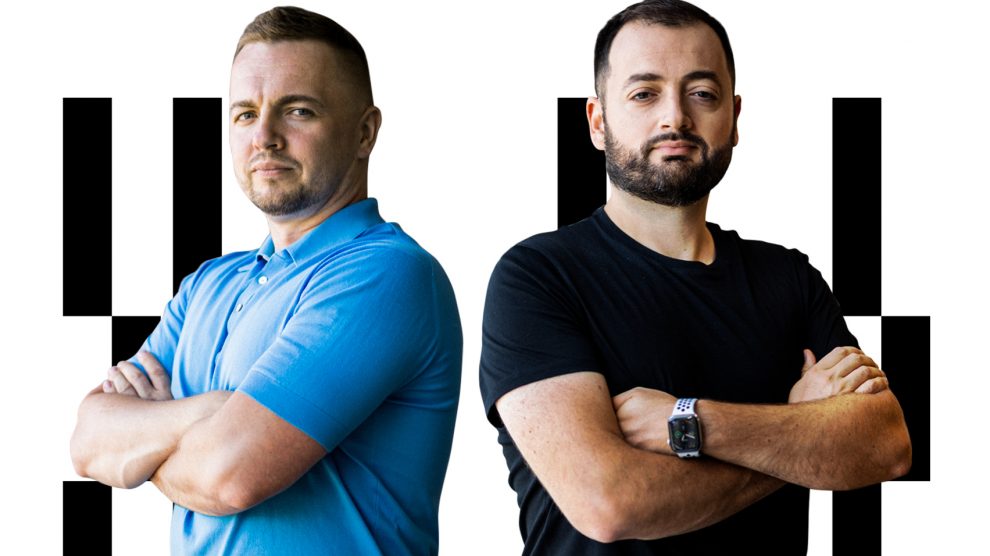 Emerging Europe’s Marek Grzegorczyk catches up with Yura Lazebnikov and Oleg Krot, two Ukrainian investors and entrepreneurs who turned their esports passion into TECHIIA, now very much a global phenomenon, to find out how they manage such a huge holding.

Before I can ask Yura Lazebnikov and Oleg Krot, the founders of TECHIIA, about their plans for 2022, they are keen to highlight the holding’s successful past 12 months.

“TECHIIA grew in 2021 by adding a number of assets,” says Krot. “Among these is Culver Aviation, which provides monitoring and analytics of the earth’s surface based on data from self-produced drones. And then there’s TECHIIA Motorsports – a car-sharing business in Los Angeles.”

Indeed, the global scale of TECHIIA’s operations means that the pair are now rarely in the same place at the same time.

“But we do meet face-to-face as often as we can,” says Lazebnikov. “An hour’s in-person conversation is worth more than months of Zoom calls and Google Meets.”

“Yura and I have long avoided duplicating each other’s functions,” adds Krot. “In the same way, we are constantly looking for a format of a convenient and stable management system in the holding. Now the board of directors has very competently assigned roles, the sectors are covered – and this almost excludes unpleasant surprises. For example, I manage the financial and law side. And Yura covers the search and development of new businesses, investments.”

While now very much a global enterprise, TECHIIA was founded in Ukraine and both Lazebnikov and Krot follow developments in their home country closely.

“We are used to diversifying our efforts and risks so as not to depend on the political situation in one country, even if it is our own country,” says Krot. “There are many aggravating factors, but also – many great opportunities. Ukraine has taken a clear western course. In such a context, the country is developing very well. The main thing is to adhere to this vector, taking all the turbulence into account.”

“We have and continue to run many joint projects [with the ministry]. I appreciate their work to strengthen the technology sector at the global level,” he tells Emerging Europe.

Finding out where global business leaders get their insight from is always a feature of interviews with such individuals, and Lazebnikov is happy to share his own sources.

“I am interested in the reports of the Big Four [Deloitte, Ernst and Young, PwC, and KPMG], the top American banks, and the near-political agenda of the United States, which affects the whole world. Of course, I also follow S&P monitoring. In addition, I follow growing markets like Latin America and Southeast Asia and already established ones like China,” he says.

But amongst this sea of information, is there still room for intuition? Krot says that there is.

“It is key for an entrepreneur,” he says. “Intuition is not a magic eight-ball that just shows you predictions. We form intuition by constantly working with information, our own and other people’s mistakes, things we see and read, by communicating and deepening into the context of what is happening.

“The best ideas don’t come when you read your analytics, or right after. But that doesn’t mean you don’t need to read it – it’s just that your brain processes it into business decisions in a bizarre way that scientists have yet to uncover.”

Interestingly. Krot also suggests that the importance of so-called back swans – such as the Covid-19 pandemic – is overestimated.

“What I mean is that entrepreneurs spend more time being horrified with them, rather than acting,” he says. “Yes, black swans provoke tectonic shifts in which someone is losing. But someone is winning. For business, such events can be both a failure and a springboard. It depends on the speed of reaction.”

Lazebnikov points to the pandemic as an example.

“Bill Gates warned back in 2015 that a global pandemic could stop the world. But this did not diminish the shock,” he says. “Even worse, many simply froze in the hope that everything would be the same. Almost two years have passed, and conversations on the ‘pre-Covid-era renaissance’ topic are still there.

“For us, the black swan is just another variable in a complex set of business equations. It erases some of the previous rules, but that means new ones can be written.”

Lazebnikov offers the example of a TECHIIA company, WePlay Esports.

“We moved all esports tournaments online in the first month of the pandemic. It continued to bring talents and teams to the events but completely overhauled the protocols for working in arenas and studios to comply with the new safety rules.

“We took risks, but we were able to continue the production of our media product and even quadrupled its volume.”

Both men admit that while a few years ago, TECHIIA’s key direction was the esports business, the essence of the holding is to build an extensive network of diversified businesses.

“TECHIIA already has several IT product companies, an IT service company, an esports media holding, the production and distribution of merchandise, and a venture studio on board. And there are even more directions to come,” says Krot. Something that the new ventures, such as Culver Aviation and TECHIIA Motorsports demonstrate.

Lazebnikov says that he is particularly excited by Culver Aviation, which can revolutionise the way that the earth’s surface is monitored.

“Culver Aviation designs and manufactures unmanned aerial vehicles for the rapid collection and analysis of data from the surface of the earth. Devices of this type work much more efficiently than copters and more accurately than satellites. But we don’t sell drones – we sell drone-as-a-service,” he says.

“I like this project because it is a start-up in the way we think of start-ups. The company makes a high-tech product that changes the consumption model. Culver Aviation engineers do everything themselves – from the design of aircraft and the development of composite materials to the algorithms for processing the collected information and servers for storing it.

“This is a complex, resource-intensive project. But the demand for air monitoring services will continue to grow. Neither large agricultural enterprises nor emergency services can function effectively without them.”

Managing such a diverse portfolio is a challenge, but Lazebnikov says that the pair have faith in the CEOs of the individual enterprises.

“We make maybe ten per cent of all the decisions, mostly connected to financing for the current year. But everything else – how to run the business, hire people, make contracts – is the CEO’s responsibility.”

Krot adds that it is impossible to build a large company without clear mechanisms and rules. Strategy comes first, he says.

“You need to devote time to long-term planning, systematisation, distribution of efforts, and competent preparation for possible unexpected changes.

“But in times of crisis, the most thought-out plans fall into the abyss. Then you need to act instantly, make mistakes, fix them immediately, take new decisions.”

As for risks, Lazebnikov says that they are “obliged” to take them.

“That is why our holding is so diversified,” he says. “It is like a balanced investment portfolio, most of which are stable businesses, and a certain percentage are high-risk fresh projects. This way we minimise the consequences of disasters.”

Krot says that large successful businesses are almost always international companies, and that this trend is unlikely to change any time soon.

“This means that in the business environment there will be a demand for managers with a deep understanding of the markets where their business operates, and capable of adapting to a rapidly changing situation in no time. Therefore, I will name diplomacy, strategic thinking, ability, and desire to learn and change as the managerial competencies that will be in highest demand over the next ten years.”

And, adds Krot, the ability to take time out.

“Good ideas often come to me during lunch, workouts, even in a dream, like Mendeleev. Therefore, I try to create conditions for them to come,” he adds. But also admits that sometimes he has to turn on “nitro acceleration”.

“What entrepreneur should not be ready to sacrifice energy, time, and health for the business?”