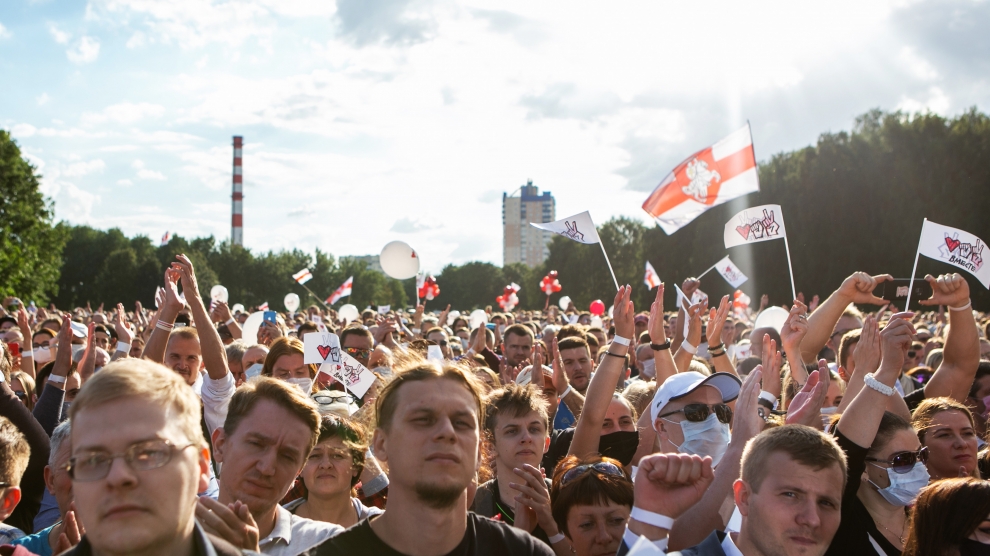 Alexander Lukashenko’s goose looks to be well and truly cooked. For the former chicken farmer who has run Belarus with a mixture of tough love and outright repression since 1994, there is perhaps no more fitting metaphor.

A presidential election this Sunday (August 9) is likely to confirm that Lukashenko’s popularity is at an all-time low. Given the lack of reliable opinion polls in Belarus, making any accurate prediction of the election’s outcome is impossible. We also need to factor in the possibility of the result being rigged. Human rights watchdog Freedom House classifies Belarus is an “authoritarian state in which elections are openly orchestrated, and civil liberties are tightly restricted”.

Since taking office in 1994, in the only Belarusian presidential election so far that both the EU and US were happy to sign off as vaguely free and fair, Lukashenko has won every subsequent contest comfortably, never failing to take less than 70 per cent of the vote.

Never before, however, has he faced real opposition. This time is different: Svetlana Tikhanovskaya, the wife of a popular YouTuber vlogger (who is currently in prison on dubious charges of illegally possessing vast amounts of US dollars) has managed to galvanise opponents of Lukashenko and represents a genuine threat to the dictator’s chances of yet another coronation.

That Tikhanovskaya managed to get on the ballot paper at all is a miracle. She went under the radar, registering her candidacy while Lukashenko was busy ensuring that her husband Sergei Tikhanovsky, and two other possible rivals, Viktor Babariko and Valery Tsepkalo, were barred. Lukashenko’s disregard of women in politics also played a part: he has suggested that the country’s constitution is not suitable for a female president. “She would faint under the pressure, poor thing,” he has said.

On August 4, during what was hailed as his main campaign address, it was Lukashenko who looked close to fainting.

Visibly weakened by Covid-19 (Lukashenko admits to testing positive but claims to be asymptomatic) his voice was at times fragile although his words were as fiery as ever. He warned of plots and threats against Belarus, and called Tikhanovskaya a “poor little girl”, manipulated by “foreign puppet masters”.

Lukashenko regularly warns of foreign terror threats ahead of elections and major protests, although the evidence often proves dubious. Last week, Belarus arrested 33 Russians who it claims are mercenaries sent to the country to “await instructions”. At his election rally Lukashenko said that another group of “foreigners” had been deployed to southern Belarus and he accused his opponents of “attempting to organise a massacre in the centre of Minsk”.

Is there going to be a revolution in Belarus? It is highly likely that something will happen, but that depends mostly on whether or not Lukashenko is declared the outright winner after the first round of voting.

What may happen is that the country’s Central Election Committee will not declare Lukashenko the outright winner after Sunday’s vote. He could instead be credited with around 47-48 per cent of the vote, followed by Tikhanovskaya on around 20-25 per cent (the rest of the votes will be carved up between the three other candidates in the election, none of whom has any real chance of winning and none of whom has ever been opposed to Lukashenko). Doing so would set up a run-off between the two on August 23, and give the president an extra two weeks before the second round to recover from Covid-19, to further silence the opposition, and to continue to get across his message that only he can save Belarus from foreigners and anarchy.

Should Lukashenko be declared the outright winner however (by taking more than 50 per cent of the vote, and this is the more likely option), the Belarus opposition movement will mobilise almost immediately and there could well be a popular revolution. Tens of thousands of Belarusians have attended Tikhanovskaya’s rallies – a first for the country’s opposition – and many more are likely to take to the streets in protest at what they will view as a fraudulent result, particularly if Lukashenko is declared the winner with his usual, 70+ per cent of the vote.

Lukashenko would then have to choose to put the revolution down, or resign (and quite possibly head into exile). He shows no signs whatsoever of doing the latter, but the way in which the security forces broke up a Tikhanovskaya rally shortly after he had made his own speech on August 4 suggests he may be prepared to do the former. He has done so before, most notably in 2010.

Tikhanovskaya herself hopes that Lukashenko will either step down or that the elections, against all the odds, will be free and fair. She told Euronews this week that “the alternative is demonstrations”, which she wants to avoid, but appeared to admit that doing so may be impossible.

“We strictly do not want any demonstrations, because our police will beat our people. We want fair elections, and if not, we will defend our votes legally. You can’t deny that our people want change. It might not happen in a couple of days, maybe in September, October, or November, but our people do not want this president anymore. Even if he cheats, I am sure that people will not let him rule for another term,” she said.

The big unknown in all of this is what the dictator to the east of Belarus will do. Lukashenko has always an awkward relationship with Vladimir Putin. At times the best of friends, Russia’s hefty push last year for Belarus to join it in a federal state irked Lukashenko to such an extent that he began courting the United States.

In the meantime, Putin’s interest in Belarus has waned. He no longer needs a new federal state (of which he would, naturally, have become president) to stay in office: he decided to change Russia’s constitution instead. He is now highly unlikely to step in on his old friend’s behalf.

Besides, Tikhanovskaya has been careful not antagonise Russia. In fact, she has said little about the Belarus that she would want to lead, except that it should be free. There has – cleverly – been no mention of closer ties with NATO or the European Union, or even any vague promises of taking a more western-leaning approach towards foreign policy. She has one goal – to create a country in which people can decide for themselves which way they want to turn.

Given that Russia is not as unpopular in Belarus as in other former Soviet republics, Putin may be gambling that once they are given the choice, Belarusians will choose the East, not the West.

In the meantime, it’s up to the West to make sure that Belarusians are given that choice. Lukashenko has barred election observers and almost all foreign journalists from entering the country, but local NGOs will sound the alarm if a plan is afoot to rig voting or counting procedures.

If there is any suggestion at all of wrong-doing, or if violent repression is used to disperse post-election demonstrations, then pressure – via the fiercest EU and US sanctions against the country yet – must be applied immediately.

That would see Lukashenko – for the first time in 26 years – cornered.