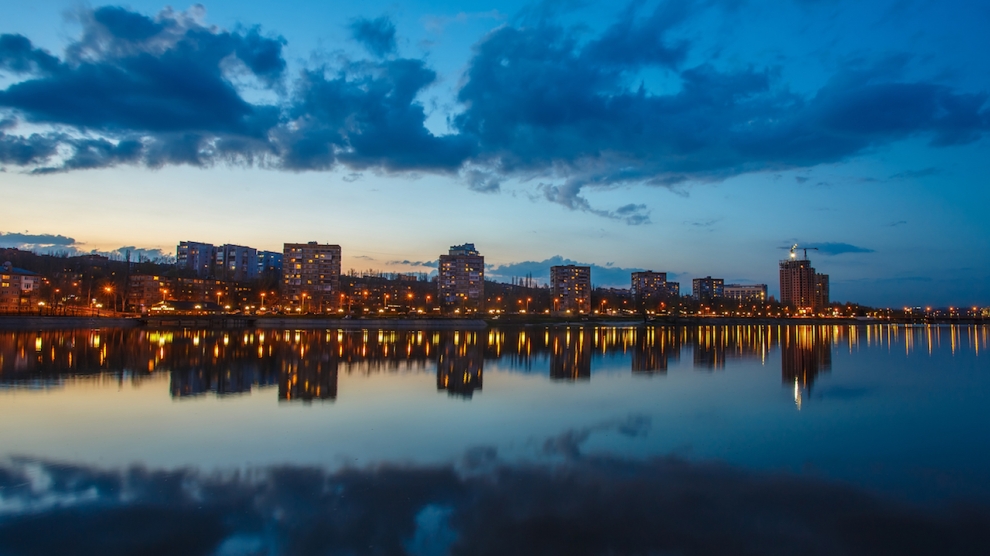 The Russian military operation began, in Crimea, on the 20th of February, 2014. A month later, after the questionable referendum on self-determination, Vladimir Putin announced the annexation of Crimea. Demonstrations by pro-Russian and anti-government groups took place in the Donetsk (in the photo) and Luhansk oblasts (collectively the Donbas) began at the beginning of March. Shelling of the airport and the toughest military operations began on 26 May.

It is estimated that about 1.5 million people have fled the Donbas area, since the beginning of the military conflict. In Donetsk and Luhansk alone, the manufacturing sector has contracted by 32 and 42 per cent respectively. It is not clear how many other businesses have been closed down or forced to move elsewhere.

Artem Gerashchenkov, CEO at Gekos, says his company started building their business in Donetsk. We used to have quite a lot of employees — up to 200 staff members. However, after the beginning of the war we left Donetsk immediately. Some of our people were evacuated to Belarus, and some to Bulgaria. Today, we have offices in Kyiv, Rovno in western Ukraine, Vilnius, Lisbon, Saratov, Moscow and Los Angeles. We are a start-up studio, an outsourcing company and one that offers business strategy and marketing investment.”

“In the summer of 2014, after the outbreak of hostilities in eastern Ukraine and, in particular, in Donetsk, Lime Systems was relocated to Kyiv within a short period of time and continued to operate whilst managing to retain almost all of its employees. This move was not easy in financial terms, as people had to leave their homes, and psychologically it was hard as well,” says Sergey Gladkov, General Director at Lime Systems. His company was founded in Donetsk, in 1993 as the IT department of a local bank and they continue to work within the banking sector with their main product being used by 25 per cent of Ukrainian banks.

“I am in Spain, at the moment, at one of our branches and we have also opened offices in Dnipro, Minsk and Grodno, but our company was initially based in Donetsk before these events occurred. The first group of people sent to Dnipro consisted of 20 people. By the end of May, the shelling had started in Donetsk and a developer said to me “I will not go anywhere, I’ll keep working here.” When he got home he saw that his house had been hit by a shell. The next day the problem with our proposal to move to Dnipro had disappeared. We gained more freedom after leaving Donetsk, and we were able to open offices all over the world,” says Vyacheslav Dodatko, CEO at Anadea, which was set up in 1999. Since its beginnings, the company has worked mainly for European and American clients.

Mr Gerashchenkov says they lost their Ukrainian and Russian clients immediately. “We have also lost many staff members. Some of them left because of family reasons. Some people went abroad, starting with Slovakia and ending up in Uzbekistan. Some stayed in Donetsk and refused to work anymore. Despite the fact that we have closed our offices in Donetsk, we still continue working with a few employees remotely,” he adds.

Finding a way out

Mr Dodatko’s priority was to save the business no matter what and a sharp fall in confidence and trust in Ukrainian companies was something she could not allow to happen. “Customers thought that the service provisioning from these companies could come to an end at any time. So being involved in their businesses seems dangerous and risky. I had to take extreme measures such as going to the window whilst using my camera to prove to our clients that everything was alright at our new location,” he says.

“At the moment, it is impossible to conduct any legal business in the territory of eastern Ukraine, as the area is beyond the control of Ukraine and the military actions are still not banned. However, in other areas (Dnipro, Kharkov, and so on), that are close to the Donetsk and Lugansk regions, business is still actively developing, despite the fact that it might be rather complicated and dangerous being so close to border areas,” says Mr Gladkov.

When asked about whether his company needed help, Mr Dodatko gets upset. “I do not understand this kind of humanitarian view of the people being affected and looking for help. Because this is definitely not about a company. If it is alive, it will survive under any circumstances. One of the main features of any company is its ability to ensure its own security or safety and we are that kind of company,” he says.

“I do not think we need any help either,” Mr Gerashchenkov adds. “As a matter of principle we are a stable company with a strong background and profound experience. We have the ability to make sales and other business processes. We know how to take external factors into account. We have a built a set of regulations taking any actions into account,” says Mr Gerashchenkov.

Mr Gladkov says that during this intense period, the company has even strengthened its position in the market. “Strangely enough, we were able to find some positive aspects in the current situation. The outbreak of military aggression and the need for an immediate relocation to Kyiv have united the company team. These days we are trying our best to be more attentive and patient towards one another. On top of that, we have become more resistant to any new difficulties and challenges, because there is nothing that can be compared to the problems that we have already been through,” he adds.

“Ukraine is a country with insanely talented and incredibly hard-working people,” Mr Gerashchenkov says. “The population can be their most hardworking when they get paid properly for the work that they do and when they see the future as a bright perspective. Our people can boast of entrepreneurial and professional talent and that unlimited,” he adds.

“We often have to face challenges such as working in a team of diverse developers from different countries, for example, from the US. The American development team did not manage to meet the challenge, so the Ukrainian team joined the project and we managed to do it. It is notable that the qualifications and experience of our people make it possible to compete with very advanced developers,” says Mr Dodatko.

“After Maidan a wave of highly educated young people rose up; people who do not want to live in a corrupt state, and who are a new generation with new views on life in all its spheres,” Mr Gladkov says. “It is a country with people who want a bright future and democracy. We have extremely intelligent and positive people with an active lifestyle; people who are not afraid of difficulties anymore. They are people who are encouraging increasingly Western principles, values and a way of life,” he adds.

Naftogaz: A Good Start Has Slowed But Optimism Remains High
Ukraine Continues to Make Waves as an IT Outsourcing Destination
Comment