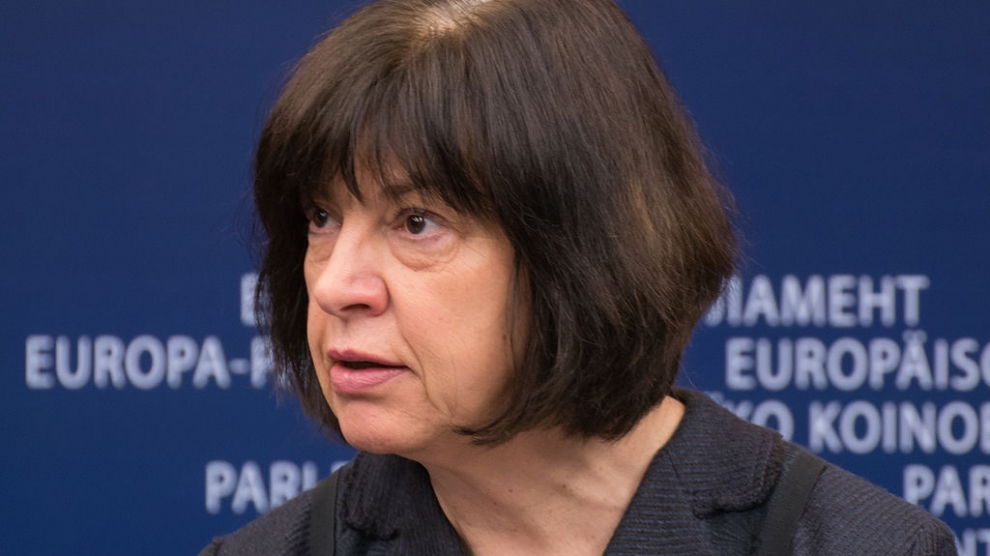 Rebecca Harms (pictured above), a former German member of the European Parliament for the European Greens, speaks to Emerging Europe about Nord Stream 2, its political implications within the European Union and what the pipeline means for the continent’s energy security.

The construction of the Russia-built Nord Stream 2 pipeline, which will run from western Russia through the Baltic Sea to Germany, will in all likeliness be finished by early next year. The project, as well as Germany – its greatest European supporter – has long been criticised not just for energy security reasons, but for what it means to the fragile geopolitical situation on Europe’s eastern borders, and its environmental impact.

One of the main opponents of the project has been Rebecca Harms, a German politician who served as a Green MEP until May, and as a member of the European Parliament’s energy committee.

In an open letter, co-written with another 90 EU lawmakers in 2018, Mrs Harms argued that by supporting the pipeline project, the German government was going against the will of the European Commission, the European Parliament and the majority of EU member states. “[The German government] is allowing a major rift between EU member countries to fester at a time when the EU needs cohesion more than ever before,” the MEPs wrote, noting that neither Europe nor Germany can afford such a divisive political situation.

Speaking to Emerging Europe, the former MEP reiterates her position.

“Nord Stream 2 is in conflict with several of our common [European] goals,” she says. “Namely, our goals to secure the energy supply by diversification of our imports,” pointing to Europe’s previous experiences with Russia, which in both 2006 and 2009 decided to halt the transit of its gas via Ukraine over pricing disputes. “It is also in conflict with the EU’s climate targets and the commitments of the Paris Agreement, since Russia uses EU money earned from gas purchases to invest in more infrastructure for fossil fuel production and management,” she adds, noting that the European bloc will not be able to achieve the decarbonisation of its economies and meet the obligations of the Paris Climate Agreement if it “continues to develop and pay for this huge fossil fuel infrastructure.”

According to Harms, Russia’s reduction in gas supplies to countries like Austria, Germany and Slovakia in 2014, in reaction to EU sales of gas to Ukraine during the then evolving crisis in Crimea and the Donbas, triggered an EU-level debate on the energy dimension of security issues. “Since then, we have discussed how to achieve a more robust security of supply not only for us, but the Eastern Partnership countries,” she points out, adding that “it is a big mistake by the German government to pursue Nord Stream 2 in spite of all the negative experiences the EU has faced with President Putin in the past.” Mrs Harms believes that the sectoral economic sanctions the EU imposed on Russia over its illegal actions in Ukraine represented “the most important political reaction” by the EU to the Ukraine crisis. “Germany is undermining this reaction by supporting the Russian pipeline,” she stresses.

Germany, whose imports of Russian gas are set to increase, has long justified the pipeline project as necessary, and is now facing increasing pressure to deliver on earlier promises by Chancellor Angela Merkel to phase out fossil fuels and boost its economy – particularly after it was revealed that the country will not be able to meet its energy targets for 2020.

There is also much doubt over whether its climate targets for 2030 are realistic. However, Mrs Harms argues that the German government’s recently announced climate action plan, in which it aims to speed up the decarbonisation of the country’s economy, is not what she would call a “total failure.” While she considers it insufficient, she adds that it is the right way to restart Mrs Merkel’s commitments.

However, “Nord Stream 2 is in conflict with both Germany’s climate goals, Mrs Merkel’s support for decarbonisation and her position to support Ukraine with sanctioning Russia’s actions,” she says, noting that Russia’s declaration earlier this year to cut gas transit via Ukraine once the pipeline is completed proved once again that the aim of the project is to weaken Ukraine’s positions.

“The EU must think big”

Discussing her expectations from EU bodies on overall fossil fuel use, Mrs Harms believes that the EU “must think big” when it comes to climate and energy security. “For me, a Climate Union or a Treaty for Renewables and Efficiency is the positive future project the time is right for. Such a new treaty or agreement could boost innovation in industry and the economy, create jobs and breathe fresh spirit into the European project,” she stresses, adding that such initiatives would be not just a strong answer to the ongoing climate protests all over the EU, but an invitation to young people to engage in the future.

“Increasing imports from Russia decreases our independence. We still lack a common energy strategy to decrease our dependence on highly problematic export countries, to strengthen investments in sustainable energy production and consumption,” she continues, emphasising that “not only renewables but investments in savings and efficiency would be of greater benefits for EU citizens.”

The former German MEP sees the development of renewable energy sources as one of the main areas where sustainable innovation can be achieved. “Phasing out nuclear and all fossil fuels for electricity production is feasible. But the process is not without challenges and needs more will and attention. We have to speed up this challenging process if we agree on the urgency of tackling climate change,” she tells Emerging Europe, emphasising that Ursula von der Leyen, the incoming president of the European Commission, has made considerable promises towards fighting climate change, including the implementation of a “European Green Deal”, an initiative formerly proposed by the European Greens. “I hope that the new Commission is not only promising but will deliver over the coming years.”

Mrs Harms points out that European institutions driven by a strong, multi-party coalition of EU lawmakers across the Scandinavian and Eastern European member states have tried hard to find a political consensus against Germany’s will to increase cooperation with Gazprom, Russia’s gas giant. “What has been achieved is not yet the end of the new pipeline,” she concludes, however, she notes that “at least the pipeline has to comply with the EU rules” after the Council of the European Union amended the EU’s Gas Directive and agreed to extend the scope of EU frameworks on third-party suppliers.

With Nord Stream 2 nearing completion, it remains likely that the finished pipeline will indeed deliver gas to Europe. Nevertheless, if Gazprom refuses to comply either with the amended EU Gas Directive or the European Court’s recent decision to limit gas transit via a German Nord Stream pipeline link, there remains a scenario in which the new European Commission will have to take action. “It would be a major mistake if the EU Commission would allow Gazprom to escape from the agreed rules. It would set a precedent and would weaken the power of the Commission. They would lose what has been achieved for the EU’s institutional power in a very important part of the common market and for our common security,” she warns.

The former MEP believes that the EU would also be forced to halt Russian gas deliveries via Nord Stream 2 if Gazprom and Ukraine’s state energy holding Naftogaz do not reach an agreement on gas transit through Ukrainian pipelines to Europe. The first round of EU-mediated talks between the two sides ended without a deal. Negotiations are expected to resume in late October.