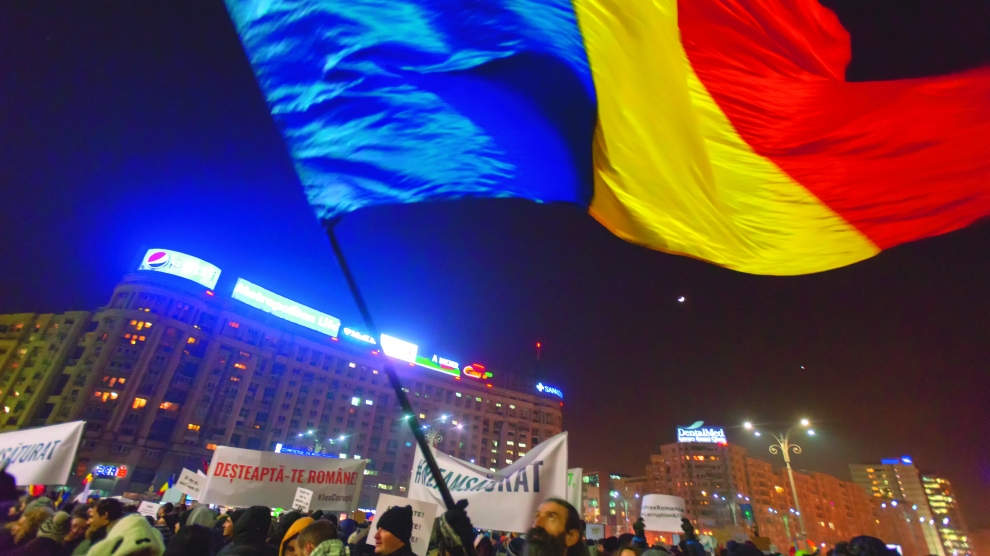 Bucharest’s metro system can often be notoriously, even dangerously overcrowded. During the weekday morning rush, which can last from 7am to 10am, the M2 line serving the northern business districts of Aurel Vlaicu and Pipera regularly reaches breaking point, with station entrances closed until the crowds have dissipated. A shortage of rolling stock, which makes the gap between services far longer than ideal, is usually to blame.

The over-crowding which took place on the evening of January 20 this year however, a Saturday, had an entirely different root cause. Romania’s jandarmerie, a militarised branch of the police force which carries out crowd control duties amongst much else, was deliberately preventing passengers from exiting the Universitate metro station. As the number of people trapped in the station grew, panic began to set in, and the situation was tense. There were scuffles. Only when it became clear that the situation posed a real threat to the well-being of passengers, after half an hour or so, did the gendarmes relent.

The crowds were heading for Bucharest’s University Square, served by the Universitate metro station. They were on their way to the latest mass protest against changes to the Romanian justice system proposed by the ruling coalition of Social Democrats (PSD) and centre-right ALDE party. The gendarmes appeared set on making it as difficult as possible for people to get to the protest

No place for young men

“The atmosphere changed that night,” says Teodor Tita, news editor at radio station Europa FM. “When the protests began this time last year it was completely different: it was almost a party atmosphere. Whole families came with their children, some even brought babies. I would not recommend bringing children to a protest now,” he tells Emerging Europe.

In his role as a journalist, Mr Tita has attended many protests since they began in January 2017 as a response to an emergency ordinance (OUG) issued by the Romanian government which decriminalised corruption involving sums of less than 200,000 lei and amnestied several incarcerated senior politicians and businessmen previously convicted of corruption. After a week of protests, which at their height saw more than 600,000 people on the streets of Bucharest and other major cities around the country, the government backtracked and annulled the ordinance.

As the government changed tactics and sought to change the justice system piecemeal, drip-feeding various pieces of legislation through parliament, the protests continued throughout the spring and summer, albeit much smaller. Usually held on Sunday evenings, they would often gather together no more than a few hundred people. What was important to those who attended however was not the size of the protests, but the fact that they continued, that they kept up the pressure on the government.

“I did not go to every protest, every Sunday,” says Maria Coman, a student. “But I went to many of them. We had to show that we had not given up. Sometimes it felt futile, but when I saw how many people came to the demonstration in January it all seemed worthwhile. I do not think so many people would have come if we had not kept the protest movement active throughout the year.”

It’s about the economy

As many as 70,000 people attended the protest in Bucharest on January 20, by far the largest for many months, and a warning for the government that ordinary Romanians were still prepared to brave freezing temperatures and heavy snow in order to defend the rule of law.

Not everybody is still protesting, however. Razvan Ion is in his early forties and owns three companies in Bucharest, operating in areas as diverse as interior design and apartment renovations to coffee distribution. “Go and ask people what they are protesting for, and you will quickly discover that many have no idea whatsoever,” he tells Emerging Europe. “They go simply to feel part of something.”

Last year he protested against the OUG. But since then he feels that things have changed. “Back then, everything was wrong about the changes to the justice law, especially the way they did it: at night, via an emergency ordinance. This time last year we had something tangible to protest about. Now I am not so sure. Besides, it is the economy which is of more concern to me than the justice system. Romania is heading for trouble: inflation and the exchange rate in particular. We need to protest against the government’s fiscal changes first and foremost.”

Mr Ion is also angry that many people protesting did not bother to vote in the last parliamentary elections, in which the PSD-ALDE coalition won a comfortable majority. “It’s naïve to think that protest will change what an election couldn’t,” he says. “I have five people in my office, all under 30. Not one of them voted in the election. One even told me ‘It does not affect me.’ Now he regrets it: some of the recent changes that the government has made to the way people are taxed will affect him directly.”

While the protests are by and large civic in spirit and non-politically aligned, right from the start large numbers of opposition politicians joined the protests. Siegfried Muresan, a Romanian MEP and spokesperson for the European People’s Party is one of them. “I have stood together with the protesters since the beginning of last year,” he tells Emerging Europe. “In January 2017, when the ruling coalition was first trying to weaken the judiciary and put the rule of law in danger I was among the 600,000 who took the streets. Afterwards, whenever protests were organised I did what I felt was my civic duty and participated: in August, November and most recently on January 20.”

Mr Muresan did not always protest in Bucharest: sometimes it would be in front of the Romanian Embassy in Brussels, or the European Commission. He was not alone. Romania’s protests have taken on an international dimension, with parallel events being held in a number of towns and cities across Europe with large Romanian populations. The Romanian diaspora is particularly vehement in its criticism of the PSD, whose policies over the past 25 years it blames for the continued precarious state of the Romanian economy, from low wages to a lack of development in rural areas.

Nicolae Staniloiu, a paramedic, left Fagaras, a town at the feet of the Carpathian Mountains in central Romania, for London in 2008. He spent many Sunday evenings last year outside Romania’s Embassy in plush Kensington. In January he flew to Romania specifically to attend the protest in Bucharest.

“I felt that this was the last chance we had to show that the protest movement is still in business,” he told Emerging Europe. “This particular protest had been planned and advertised for weeks. If only a few thousand people had bothered to come then the government would have shrugged its shoulders and moved on. This protest had to be big, and that’s why I felt the need to come and be part of it.”

Many others came from far and wide. One group of protesters spent 10 days walking from the Transylvanian city of Cluj to Bucharest. Their aim was to raise awareness about the protest and to gently nudge the notoriously fickle residents of the capital into feeling compelled to follow their lead. It appeared to work: turnout was larger than anyone expected.

“At the beginning on 2017, there was a sense of imminent threat to the judiciary from the ruling coalition,” says Mr Muresan. “The hasty manner in which they tried to modify the judicial laws prompted people to take to the streets and protest. The message was channelled towards protecting the independence of the judiciary and against the ruling politicians. Later in 2017, when the government’s bad political decisions had implications on the economy as well as the judiciary, the message of the protests became more divergent, less unified. However, the discontent of the people was still there. The good news is that the beginning of this year has shown that there is again more coherence in the message of the protesters.”

What comes next is anyone’s guess. Much depends on how Romania’s latest government (the third in a year) sets about implementing the changes to the justice system it still apparently needs to enact in order to keep the PSD’s leader Liviu Dragnea – and many other high-profile politicans – out of prison. It began, in late February, by recommending that Laura Codruta Kovesi, the enormously effective (and hugely popular) head of the country’s anti-corruption unit, the DNA, be dismissed.

The new prime minister Viorica Dancila is a close ally of Mr Dragnea. A convicted criminal currently serving a two-year suspended prison sentence for attempting to rig an election – Mr Dragnea is barred from taking the job himself, although he remains and MP and is speaker of the country’s lower house. Last November Romania’s powerful anti-corruption agency, the DNA, acting on an investigation by the EU’s own anti-fraud body OLAF, charged him with setting up an “organised criminal group” in order to siphon off EU funds. Mr Dragnea also faces charges relating to an uninhabited island on the Danube, the administration of which was transferred to a company to which he is allegedly connected. If found guilty on either charge he will almost certainly receive a long custodial sentence.

The need for legislation that would either pardon Mr Dragnea or render charges against him obsolete therefore remains pressing.

Siegfried Muresan remains optimistic that the European Union will eventually force the Romanian government to see sense. In a joint statement the President of the European Commission Jean-Claude Juncker and the Commission’s First Vice-President Frans Timmermans warned Romania’s government on January 24 – just four days after the latest protest – that the independence of Romania’s judicial system and its capacity to fight corruption effectively are essential cornerstones of a strong Romania in the European Union.

The statement refers to the Cooperation and Verification Mechanism (MCV), set up by the Commission in 2007 when Romania and Bulgaria joined the EU as a transitional measure to assist the two countries to remedy shortcomings in the fields of judicial reform and corruption:

“In its latest report under the MCV in November 2017, the Commission highlighted that the government and the parliament should ensure full transparency and take proper account of consultations in the legislative process on the justice laws. The Commission also made clear that a process in which judicial independence and the opinion of the judiciary is valued and given due account, also drawing on the opinion of the Venice Commission, is a prerequisite for sustainability of the reforms and an important element in fulfilling the CVM benchmarks. The latest CVM Report identified the justice laws as an important test of the extent to which the legitimate interests of judicial and other stakeholders are given an opportunity to be voiced, and are taken sufficiently into account in the final decisions. Events since then have done nothing to address these concerns.”

The statement ended with a warning which suggests that Romania could well face disciplinary measures similar to those launched against Poland in December 2017:

“The Commission calls on the Romanian parliament to rethink the course of action proposed, to open up the debate in line with the Commission’s recommendations and to build a broad consensus on the way forward. The Commission reiterates its readiness to cooperate with and support the Romanian authorities in this process. The Commission again warns against backtracking and will look thoroughly at the final amendments to the justice law, the criminal codes and laws on conflict of interest and corruption to determine the impact on efforts to safeguard the independence of the judiciary and combat corruption.”