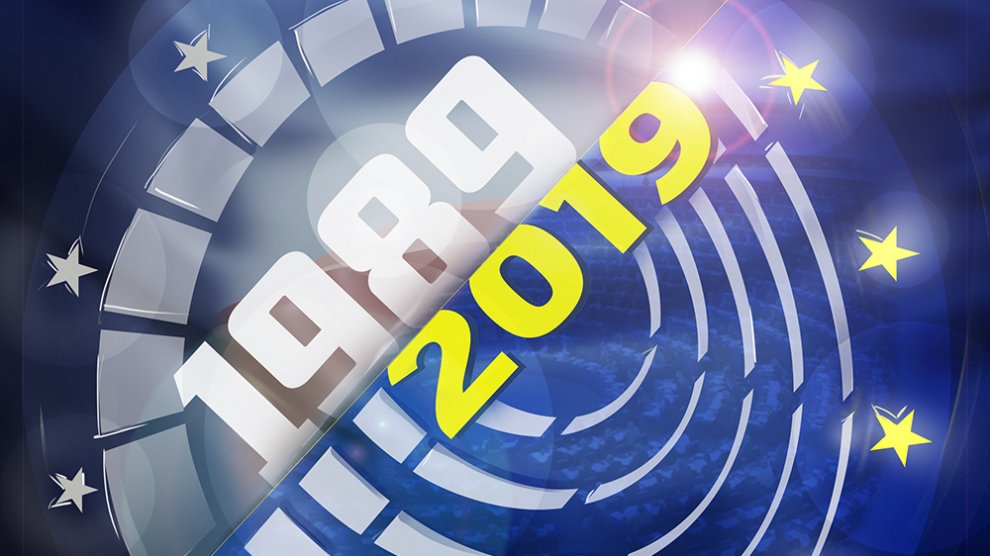 For many of the countries of emerging Europe, 2019 offers double cause for celebration: 30 years since the end of communism in 1989 and 15 years since EU membership in 2004. For all concerned, EU enlargement has been an overwhelmingly positive experience. Why then, is anti-EU sentiment in Central and Eastern Europe increasingly strong?

Two subjects occupied the UK’s newspapers in the spring of 1989. One was the internecine conflict within the ruling Conservative party over whether or not Britain should embrace the coming European Single Market (oh, how little has changed), while the other was China, which in the midst of the Tiananmen Square protests looked to be on the brink of civil war.

It therefore went almost unnoticed that on June 4, the same day that the Chinese army finally, brutally dispersed demonstrators from Tiananmen Square, the trade union Solidarity won an overwhelming victory in a partially free election in Poland, paving the way for the peaceful fall of communism in the country later that summer.

The partially-free election (which preserved a majority of seats in parliament for the Polish Workers’ party and its allies) had been the compromise outcome reached during two months of negotiations between Solidarity and the government held in February and March 1989. Known as the Round Table Negotiations, they were convened by Poland’s leader General Wojciech Jaruzelski in response to nationwide strikes which were crippling the country’s economy. Mr Jaruzelski’s hope was that he would be able to draw prominent members of the opposition into the ruling elite without changing the overall political power structure. In reality, the talks led to radical changes in Polish government and society, and had continental repercussions.

“The Berlin Wall fell because Poland started off the process,” says the country’s current president, Andrzej Duda. His prime minister, Mateusz Morawiecki, a member of a radical wing of Solidarity, was against the talks at the time, but admitted that they opened a new dialogue platform and introduced democracy into public life.

“I am happy with the way that events in Poland have evolved, but I still feel that a more uncompromising stand by Solidarity could have perhaps forced bigger concessions from the communists.” Regardless, by the end of year, Solidarity leader Lech Wałęsa had become the first democratically-elected leader of Poland. Six months later communism had been swept away across what would become known as emerging Europe. With the notable exception of Romania, the process was by and large peaceful.

Since then, Poland has become an increasingly prosperous country which in 2018 was reclassified by global index provider FTSE Russell from an ’emerging’ to ‘developed’ market, joining a group of 25 most developed economies in the world including the US, UK, Germany, France, Japan, and Australia. Poland was the first Central and Eastern European country to be reclassified to developed market status, but will not be the last.

For Poland, and indeed much of emerging Europe, it was membership of the EU – achieved on May 1, 2004 – that provided the launchpad towards developed market status. For countries across the region, joining the European Union held the implicit promise of economic convergence to Western European standards of living.

Fifteen years after the 2004 accession (when the Czech Republic, Estonia, Hungary, Latvia, Lithuania, Poland, Slovakia and Slovenia, as well as Cyprus and Malta, became EU members) this expectation has largely been met. Access to the single market created new business opportunities, triggered vast capital flows to the new member states and facilitated their integration into global supply chains. The catching-up process gained additional impetus during the accession talks and again upon joining the European Union. Though a significant gap remains today, it is shrinking at a rapid pace.

“Central European countries are now living in golden times,” says Filip Dvorak, the managing director of BASF Czech Republic. “As an example, Bratislava and Prague are amongst the top seven richest areas in Europe.”

On average, GDP per capita (at purchasing power parity) in the new member states has risen 250 per cent since 2000, compared to 50 per cent for the EU as a whole. This trend is visible across the board. GDP per capita in all the new member states has quickly converged towards the EU average and is now above 70 per cent in all the countries that joined in 2004. Nominal compensation per employee has converged towards the EU average in all the new member states and has risen particularly quickly in the Baltic states, so much in fact that in March 2019 Estonia reported that significant numbers of its citizens who had previously emigrated to Finland are now returning home, attracted by rising wages.

Giving up five per cent of sovereignty

There have been other benefits of EU membership. Unemployment rates have fallen, the number of people in further education has risen and governance has improved. Billions of euros have been spent on infrastructure projects designed to link emerging Europe with the rest of the single market. European Union membership – the goal, since 1989, of all emerging European nations – has been unquestionably positive. Why then, the current eurosceptic backlash?

According to Boris Vujčić, the chairman of the Croatian National Bank, it’s certainly not a question of lost sovereignty.

“Yes, the EU does mean handing over some sovereignty, but no more than five per cent,” says Mr Vujčić, who led Croatia’s accession negotiations ahead of its own entry to the EU in 2013, “but then think about everything you get in return! Then look at Finland, look at Portugal. These are two countries which are different in almost every way, but both are EU members. They prove that it is possible to be a member of the EU and still be very different. The idea currently being pushed by the populists that being in the EU means losing your national identity is ridiculous.”

Erik Berglof, director of the Institute of Global Affairs at the London School of Economics and Political Science (LSE) believes that populism is being fed by growing inequality.

“Income convergence has been uneven,” he told a high-level conference in Vienna in April dedicated to the 15th anniversary of the EU’s eastern expansion. “The high demand for workers in advanced economies has exacerbated negative demographic trends. Medium-skilled jobs are disappearing leading to a polarisation of jobs which increases inequality. All of these things feed populism which in turn can lead to a reversal of reform and deter investors.”

Mugur Isarescu, who has been at the helm of the Romanian National Bank for more than two decades, feels that gaps in convergence are a country level problem.

“Without resolute structural reforms at the local level it is only natural that some countries will not benefit from EU membership as much as others. There is no substitute for coherent macro-economic policy,” he says, in what could be construed as a veiled dig at the current (eurosceptic) Romanian government’s chaotic economic policies.

Another school of thought is that the European Union has become a convenient scapegoat for unpopular decisions in member states.

“It is politically easy to blame Brussels,” says Mateusz Szczurek, a member of the European Fiscal Board (EFB).”In my time in the [Polish] finance ministry, I was careful never to do this. I never said that we need to take unpopular fiscal or budgetary decisions because Brussels wants us to. I always explained that we were taking these decisions because they were good for us. To do otherwise leads to Brexit.”

Mr Szczurek, who combines his role at the EFB with an associate directorship at the European Bank for Reconstruction and Development (EBRD), also has advice for would-be EU members, particularly in the Western Balkans.

“When it comes to the application of EU rules,” he says, “make your reforms now. Don’t carry out your reform after you join the EU. Then it becomes too easy to blame the EU, something which is incredibly damaging in the long run.”

Mr Szczurek believes that the EU provides member states with what he calls a “wonderful” set of macro-economic tools that makes them unbeatable. If, of course, the will to make full use of them exists in member states.

Elections for the European parliament, scheduled for May 23-26, will be a test of how deep-rooted anti-EU sentiment has become across the continent, not just in emerging Europe. Eurosceptic parties are expected to do well.

However, the election in March of the staunchly pro-European, anti-corruption campaigner Zuzana Čaputová as president of Slovakia, as well as a resurgent opposition in Poland, including a newly-founded liberal party, Spring, suggests that the eurosceptics will not have things all their own way, however.

“Čaputová’s victory has certainly given heart to progressive parties, especially Momentum in Hungary,” says Zselyke Csaky, research director for Europe and Eurasia at the Freedom House think-tank. “The opposition in Poland is also well-placed in opinion polls and could even gain more votes than the ruling Law and Justice party. But eurosceptic parties will still do well. I am cautious about seeing Čaputová’s victory as a turning point, especially as the murder of journalist Jan Kuciak – which galvanised the opposition – makes Slovakia something of a special case.”

Csaky is also doubtful as to how real much euroscepticism in emerging Europe actually is.

“Migration aside, [Hungary’s PM Viktor] Orbán has always voted with the European mainstream,” she tells Emerging Europe. “He likes to talk about faceless Brussels bureaucrats but only in the sense of highlighting how much he wants to reform the EU, to create a Europe of nation states. The euroscepticism of Poland’s ruling party is much the same.”

Ultimately then, the strength of euroscepticism in Central and Eastern Europe may have been overplayed. Günter Verheugen, the German politician who was European Commissioner for Enlargement from 1999 to 2004 and who did as much as anyone to make the 2004 accession happen, certainly thinks so, in Poland as much as anywhere.

“I am not worried about euroscepticism,” he told Emerging Europe. “Look at Poland for example. No country in history has fought harder for its freedom. They are not going to give it up now.”

Nor, indeed, will any of the emerging Europe states. The European Union may provide populist parties with a convenient scapegoat and may often feel the full brunt of their nationalist rhetoric, but not a single mainstream party anywhere in the region has yet called for withdrawal. They know full well that ordinary citizens – so many of whom took to the streets in 1989 – would not stand for it. Instead, the EU will remain a guarantor of peace and prosperity in an uncertain world. When, in 2034, we come to mark the passing of another 15 years since that historic 2004 enlargement, we will find ourselves living in an EU that is larger still. Brexit – should it ever happen – will be a one off.

A look at Kosovo’s IT scene
Unsustainable tourism?
Comment