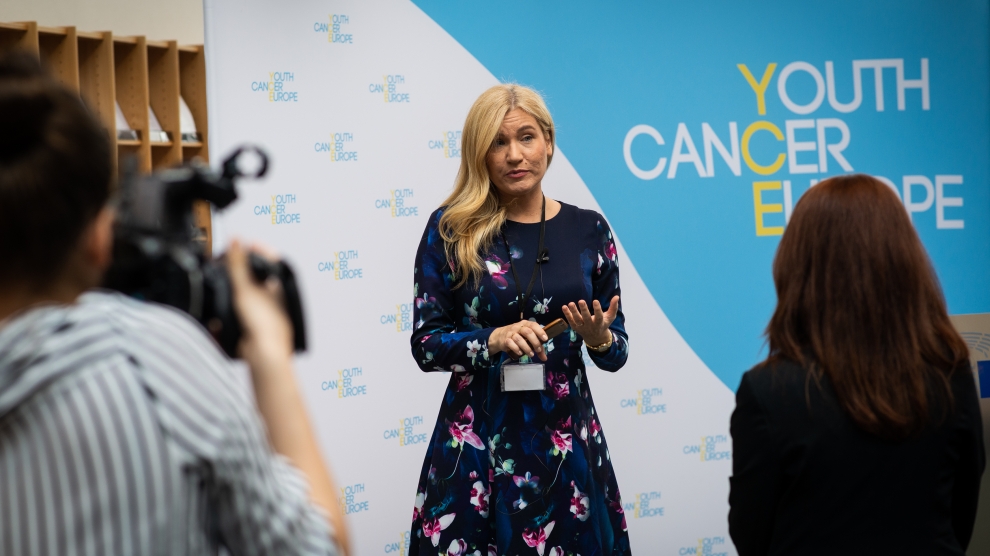 A Romania-based organisation, founded by a Hungarian and led by a Lithuanian, wants to improve the lives of young cancer survivors across the whole of Europe.

For the past two decades the remarkable Katie Rizvi (pictured above) has been working to make the lives of young children in Romania suffering from cancer a little easier. Her organisation, The Little People, which she founded in 1996 with husband Shajjad, has created a nationwide network which provides a sophisticated psychological care programme from the very first moment of diagnosis. The network that The Little People has created is unique in Europe, and represents a massive achievement for the NGO’s founders.

“Psycho-oncology is still a relatively new field and there are only a few faculties worldwide which teach it,” Katie Rizvi – born and brought up in Budapest, Hungary, tells Emerging Europe. “We saw that at an institutional level there was no psychological support network and so we realised very quickly that we would have to create our own.”

The programme begins by lessening anxiety, both in patients and in their families.

“Each child gets an entire package when they are diagnosed. We engage with the family to reassure them that child cancer need not be a death sentence,” she says. “We have learnt how the family dynamic works. Teaching parents how to best make sure that children will comply with treatment, for example. It’s difficult enough to get a two-year-old to eat spinach: try getting a two-year-old to sit still for radiotherapy.”

The Little People provides services for more than 2,000 patients and their families each year. What started out as a charitable organisation has become something much larger clearly focused on providing what Rizvi calls “the right services, the right way.”

“We are filling in the gaps the state has left,” she says. “At the same time, we recognise that it should not always be the state which should be providing these services. Because we are independent we are free to recruit our own specialists and our own volunteers.”

One of the key elements of the programme is ensuring that patients are encouraged to get back to a normal life.

“We now have a particular focus on teenagers and young adults,” says Rizvi. “They are old enough to have understood the life-threatening nature of their disease, and yet they are often invisible. Elderly cancer patients get attention, children with cancer get attention, whereas young people are ignored, and yet often they have the most pressing needs. Look at the 30-year-olds who have just started a family and need to take out mortgages. They find themselves discriminated against in so many ways. It’s a very different set of problems to those experienced by 60-year-olds. That’s why we have created a special programme for those who have come through treatment.”

It was the stark realisation that while Europe was awash with cancer organisations and patient forums, there was nothing specifically youth driven, youth inspired and youth oriented that convinced Rizvi that there was a need for an organisation which could serve as a bridge between childhood and adult cancer patients, across tumour types, addressing the needs of teenagers and young adults.

“That’s how Youth Cancer Europe came about,” she says. “We had created an aftercare programme for young people in Romania and we knew we were good at building a community. In 2014 we began reaching out to neighbouring countries and some of their young people began to come to Romania for our annual meetings, camps and festivals. They came from the Czech Republic, from Serbia, from Lithuania, from Hungary and from Moldova. The more friendships were made the more we became aware of the lack of a structured network for all young cancer patients and survivors in Europe.”

In 2015 Katie and Shajjad Rizvi formally created Youth Cancer Europe with Šarunas Narbutas, a Lithuanian corporate lawyer. Registered in Cluj, Romania, it is now a cross-national network comprising organisations from 16 countries. In 2017, Narbutas – diagnosed with chronic myelogenous leukaemia (CML) at the age of 18 – was elected the organisation’s first chairman.

“Cancer patients and survivors need to know that they are not alone,” Narbutas, now in remission after 12 years of treatment, tells me. “There is a lot happening throughout the EU but many of these activities are not relatable to our daily lives. Youth Cancer Europe wants to bring into the spotlight many of the issues we face, but which have so far been ignored.”

The right to be forgotten

At the end of October, Youth Cancer Europe hosted the first of five events at the European Parliament in Brussels, to call for EU-wide legislation to put an end to financial discrimination faced by cancer survivors across Europe.

Held under the banner of The Right To Be Forgotten, the event highlighted the fact that people who survive cancer as children or young people currently face a life sentence from financial institutions which require their condition to be declared on all mortgage and insurance applications.

While convicted criminals in the European Union have their criminal records expunged within several years after serving their sentence, cancer survivors on the other hand must declare their medical history throughout their life and continue to suffer discrimination. They can face prosecution if they make untrue statements about their health.

“You’d think that there would be laws against such discrimination across the European Union,” says Rizvi. “But there aren’t.”

France is currently the only EU country which allows patients to no longer declare their condition – 10 years after treatment has ended, or after five years in the case of those who were under 18 at the time. The Belgian government has also committed to introducing similar legislation.

“We have shown that we will do what is necessary to address key stakeholders and policy makers to ensure that those who live with cancer are no longer abandoned by their institutions and facing harsher discrimination than convicted criminals,” said Narbutas. “We will continue to push until this becomes a reality for everyone in Europe.” 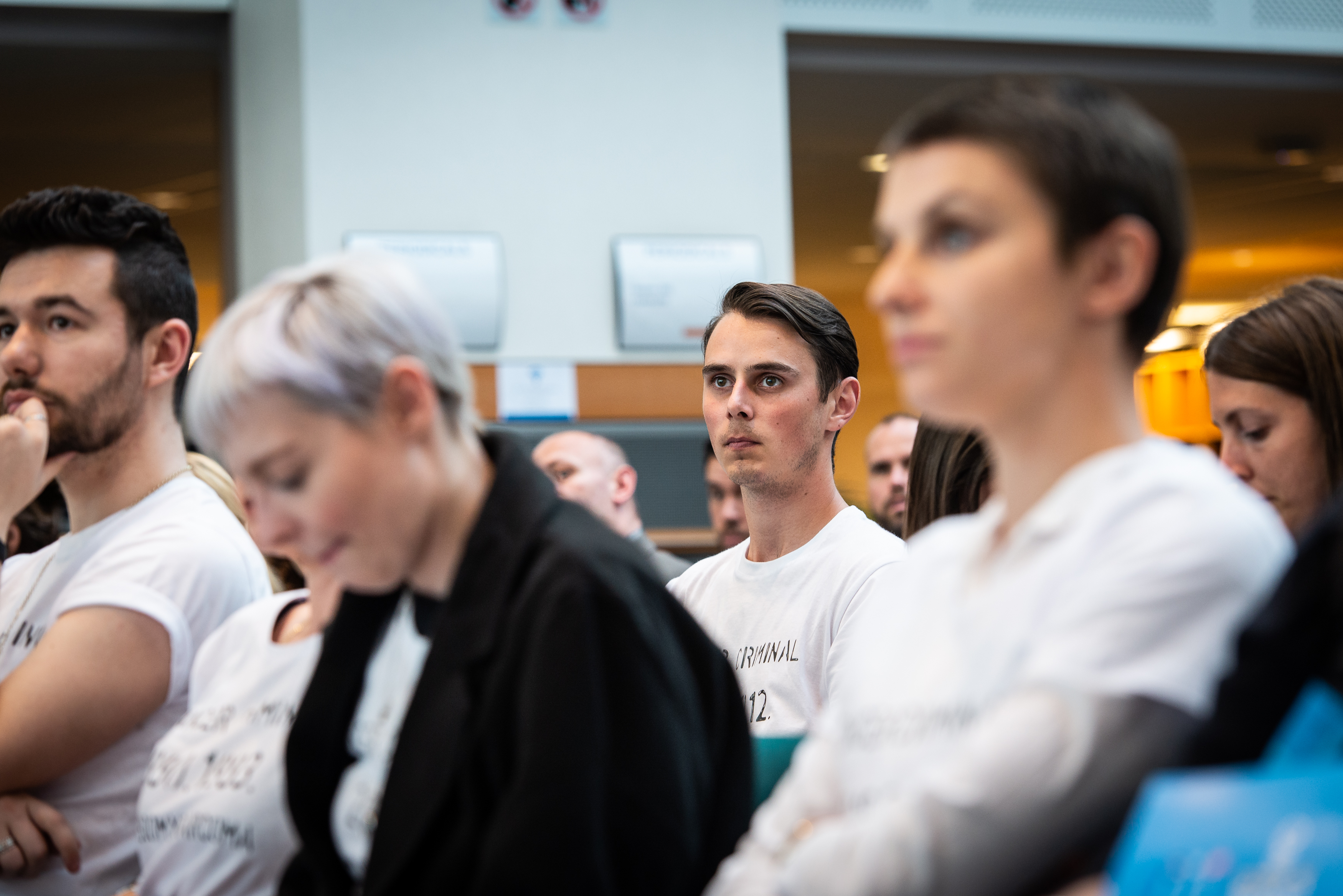 The event, attended by MEPs, representatives from the insurance and pharmaceutical industries, medical associations and other policy influencers created a lot of noise, with media outlets across Europe picking up on the issue of financial discrimination against cancer survivors.

“The Brussels event was a combination of us and our young people identifying problems at an EU level, learning about EU decision making and starting the process of bringing about tangible change in all the countries of Europe. Health is a member state mandate, but events such as this can empower our own members to go home and work with local decision makers to make a difference,” explains Rizvi.

The event also saw the launch of a white paper which highlights five key areas where policy needs to be changed: financial discrimination is just one. The others are access to cross-border healthcare, fertility preservation, dental care and reconstructive surgery, and mental health. Each will have its own event over the coming months, and all will be held in Brussels.

“These events allow us to present the common-sense solutions our young people have come up with and which are presented in the white paper. Brussels is the best place to do that,” says Rizvi.

A place at the table

Rizvi believes that until now, NGOs in emerging Europe have themselves suffered a certain amount of discrimination, often being treated in a somewhat patronising way by western European donors and backers.

“Most emerging Europe-based organisations are developed under the direct input of western European nations,” she says. “We do not get a seat at the table. But those countries are not exposed to the day-to-day realities of Central and Eastern Europe; we are. So we decided to make our own table. And because we have become very good over the years at creating communities, creating partnerships, we decided to invite others to join us at our table.”

The impact of Youth Cancer Europe’s initiative will be measured over the next five years. The white paper sets out concrete steps and a timeline which will allow the organisation to quantify any real change its conclusions lead to.

“We know we have to work hard, and that we have a long way to go,” says Rizvi. “But we have to start somewhere. And as you have seen we have assembled a group of inspirational young people who are prepared to fight for what they see as basic human rights. They know what they want to do, and they are determined to see the process through.”