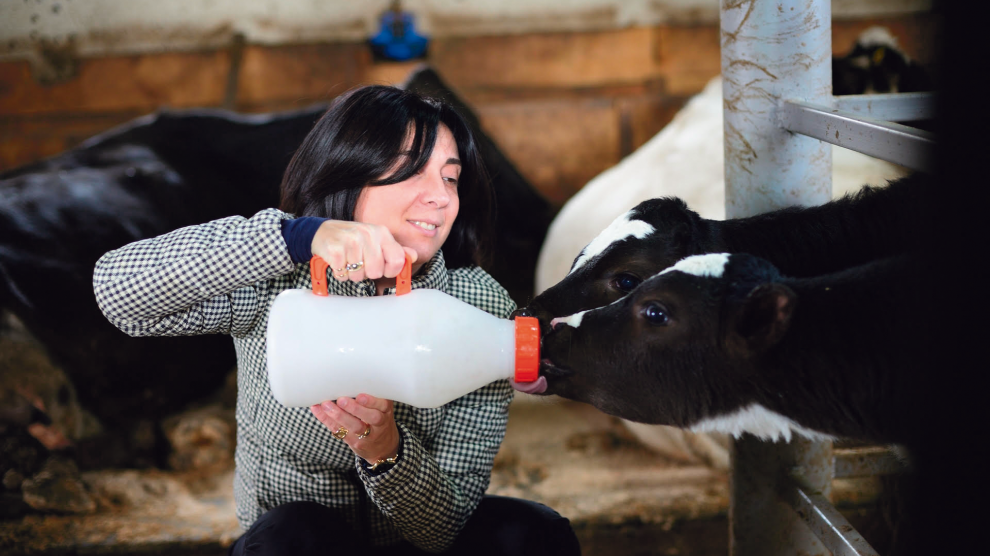 “There is no shame in being a farmer,” says Nino Zambakhidze, the CEO of the Georgian Farmers’ Association (GFA). Georgia’s Young Global Leader for 2017, named by the World Economic Forum and honourable country coordinator of the US State Department’s Invest for the Future Programme, empowering women entrepreneurs and business owners across Europe and Eurasia, she talks to Andrew Wrobel about the potential of Georgian agriculture and the need to invest in young farmers.

With her businesses, the association, and her television show, Nino Zambakhidze is a busy woman. She’s forced to cancel on me when we first set up a meeting during my stay in Tbilisi. Fortunately, we manage to catch up before my departure and schedule a follow-up when she’s in the UK a few weeks later, to speak about women’s economic empowerment.

Her story is both eccentric and inspiring.

“I had a business partner in my tea and coffee business, which I still own. He got drunk and called me to announce that he wanted to buy two cows. Two weeks earlier, my two boys had suffered from food poisoning because of dairy products they had consumed and my mother was drilling the idea into my brain to find a good cow that can produce milk for my family. So without much thinking, I agreed, and that’s how I got involved in farming.”

Nino is now the owner of a cheese factory, a 100-milking-cow farm, an apple orchard, a cold storage facility, an artificial lake and a training centre for farmers.

“I need to tell you a secret: I hate dairy products,” she almost whispers. Is it an obstacle for her to make farming her passion? Clearly not. She also overcame quite a few challenges when she needed a loan and the bank asked her to come back with her husband to prove she was able to pay it off.

“I am proud to call myself a farmer. I am a farmer who moved from a city to the village, and one of the biggest farmers in the country. When I did that I quickly realised that farmers faced a lot of challenges that they could not solve themselves. There were three of us and in 2012, we decided to set up the Georgian Farmers’ Association. Right now we’re uniting 4,000 members all over Georgia, all business-oriented.”

They first started by advocating for farmers’ rights and linking them to the market, but these were not as challenging as the stereotypes were.

“Farmers were ashamed of being farmers. After the collapse of the Soviet Union, young people tried to hide the fact that their parents and grandparents were farmers. They didn’t want to be called peasants, which historically refers to people with hardly any education living in villages. We had to destroy that stereotype.”

So the term ‘farmer’ was reinvented, by explaining to people that farmers were patriots who fed every single person and that they should be proud of doing so. Migration from villages to cities was another challenge. With the help of donor organisations, they started the GFA Junior programme.

“We created a mobile application for them, Agronavti, which provided them with all possible information about where they could sell their products online, market research and sectoral news.”
They had also promised to help them find sustainable buyers.

“We reached out to Adjara Group Hospitality — the biggest hotel chain in the country — and they agreed. They said that in the hospitality business quality and artisan food is a critical element and they also help them understand how to achieve that good quality.”

This has helped farmers not only to sell but also to acquire funding in order to develop, because their businesses were more transparent — they eventually had bank accounts and a credit score.
“We’ve now contracted around 300 farmers and as Adjara Group expands their hotels, we’ll increase the number of contracts.”

Over the years, the association has grown exponentially but there is still room for growth. According to estimates, there about about 800,000 farmers in Georgia, about 47 per cent of the entire rural population, contributing 9 per cent of the country’s economy.

“Following the collapse of the USSR, most people in Georgia received small plots of land from the then president of Georgia, Eduard Shevardnadze. Most farmers become so not because they wanted to be farmers and peasants but because they were forced to do so. This has to change. What is now needed is rural development. Then those small-scale farmers, or just households with a small plot of land, will be able to switch to different activities.”

In February 2017, in the framework of the European Neighbourhood Programme for Agriculture and Rural Development (ENPARD), the EU launched a new phase of training programme for managers and members of agricultural cooperatives.

“We have very good, successful outcomes – and a few failures too – but I think that there is development of business-oriented and smart climate agriculture through those agricultural cooperatives.

We have a huge challenge in terms of education. That’s missing because after 20 years of stagnation a qualified agronomist or veterinarian is very hard to find. Another challenge is road infrastructure, while yet another is flexible insurance, as hardly anything now is insured. Finally, access to finance needs to improve. To the banks we are still high-risk clients, especially people living in villages.”

But challenges are Nino’s speciality. Now a renowned business woman, she was penniless two decades ago after her first jeans business had failed and she still had to pay back the 20,000 US dollar loan she had taken in the United States. Then, in her early twenties, she promised she’d never start her own business ever again. Georgian farmers are happy she changed her mind.