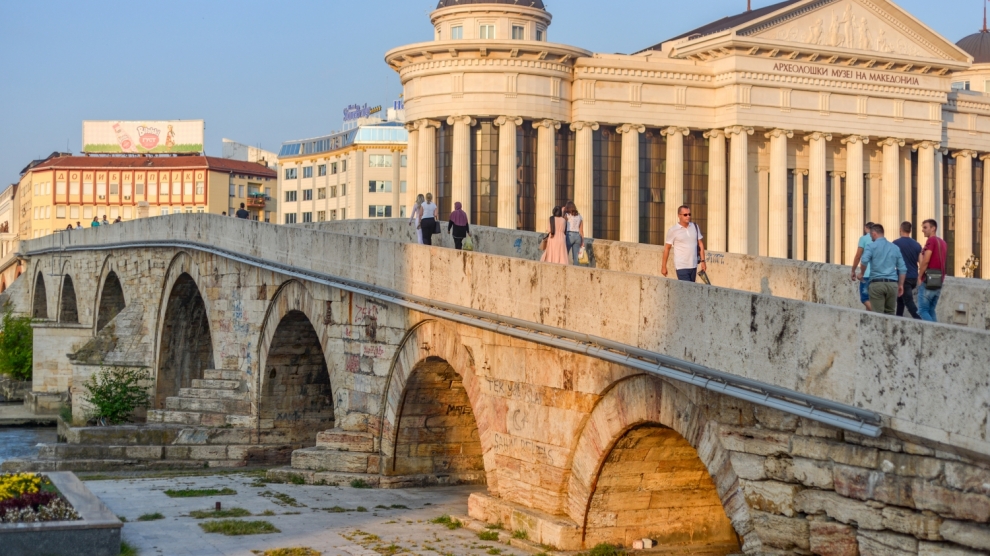 Less than a month after the European Union finally agreed to begin accession talks with North Macedonia, there is a new hurdle on the country’s road to membership: Bulgaria.

Bulgaria’s demands will not come as a surprise to those who have followed the region’s history. While Bulgaria was the first state to recognise Macedonia’s independence after the fall of Yugoslavia, the country has never accepted the existence of a separate Macedonian ethnicity. Instead, Bulgaria claims that ethnic Macedonians are a subgroup of Bulgarians and that the Macedonian language is a dialect of Bulgarian.

The document has heated up discussions about Bulgarian-Macedonian relations at a time when the country was celebrating finally joining NATO.

NATO accession only came after the signing of the Prespa agreement with Greece in 2018 ending an almost three decade-long dispute over the use of the term Macedonia. The country changed its official name from Former Yugoslav Republic of Macedonia to North Macedonia – a move that proved extremely controversial within the country. It was only accepted – and then, not by all – when then prime minister Zoran Zaev made it clear that NATO and EU membership could not happen without it.

Greece has previously blocked the nation’s attempts to join NATO and the EU because of the naming dispute.

Now, it seems that Bulgaria is the country that might stand in the way of North Macedonia’s European future, jeopardising relations between the two countries.

Ironically, the two Western Balkans nations signed a friendship treaty in 2017 to bolster their relationship. As part of this treaty a bilateral commission was set up to try and overcome long standing disputes that the two country have over the shared parts of their histories.

For instance, there are disagreements over certain historical figures and their ethnicity. Goce Delčev, leader of a 1903 rebellion against Ottoman rule, is seen as a national hero in both countries. However, in North Macedonia he is Macedonian while he’s a Bulgarian in Bulgaria.

The commission, however, has not been operating since December 2019.

“If the mixed history commission does recommence its work by June and the authorities in Skopje continue to falsify history, Bulgaria will not agree to start pre-accession talks with northern Macedonia,” said Bulgarian MEP Andrey Kovachev, a member of PM Boyko Borisov’s GERB party.

The friendship treaty, which also came about during Mr Zaev’s term as the prime minster, is also now being criticised in North Macedonia.

“Zoran Zaev rushed to sign a very asymmetric and unfavourable agreement with Bulgaria, which was made and ratified behind the scenes so the majority of citizens did not know anything about its provisions,” says Biljana Vankovska, head of postgraduate studies in Peace and Development at the Faculty of Philosophy in Skopje.

She believes that the relationship between Skopje and Sofia is broken.

“One can hardly talk about any improvement in Bulgarian-Macedonian relations over the last few years, but now they are going to be brought to the lowest possible level,” she tells Emerging Europe.

According to Professor Vankovska, the blame for these developments rests squarely with the Macedonian political elite.

“What is truly frustrating is that Macedonian state elites show no ability to learn from their own mistakes, and now pretend to be ‘sleeping beauties’ woken up by an unpleasant Bulgarian prince. Bulgaria is taking advantage of the EU’s preoccupation with more serious issues, leaving the Balkan enfants terribles to play their nationalist games,” she says.

She also adds that the disagreement between Bulgaria and North Macedonia could prove far more challenging than the dispute with Greece.

“The Bulgarian-Macedonian hurdle is much more serious, mostly because of the closeness between the two peoples and cultures. The Macedonians could not be truly challenged by the Greeks, because the two nations are very different in many respects, but Bulgarian cultural imperialism is seen as a much bigger threat to Macedonian identity precisely because of the similarities,” she adds.

Aleksandar Nikoloski, the vice president of the Macedonian opposition party VMRO-DPMNE has said that the government is trying to relativise the Bulgarian document which has “become and integral part of the decision of the European Council on Macedonia.”

“It is necessary to build a joint position that will be a worthy response to the attempts to erase the Macedonian language and people, and that position should be built in accordance with all key political and social factors, and it should reflect the current situation and be binding for the current and for each future government,” he added.

However, President of North Macedonia Stevo Pendarovski does not expect the issue to impede the country in joining the European Union.

“I do not expect such issues to lead to the suspension of EU membership negotiations. Let me remind you that this document is the position of a member state, not an official position or criterion set by the European Union. We have recently received an unconditional decision to start negotiations and the European institutions are already working on the preparation of the negotiating framework, in accordance with the conclusions and the adopted new methodology. We can expect the issues of good neighbourly policy to be present in the negotiating framework,” he says.

If Bulgaria had really wanted to put a spanner in the works, it could have vetoed the European Council decision to begin accession talks, which are likely to take many years as when they commence (no official date has yet been set). Bulgaria’s current government, which has never been afraid to adopt populist and nationalist causes, may merely be playing to its home crowd. North Macedonia will certainly hope so.