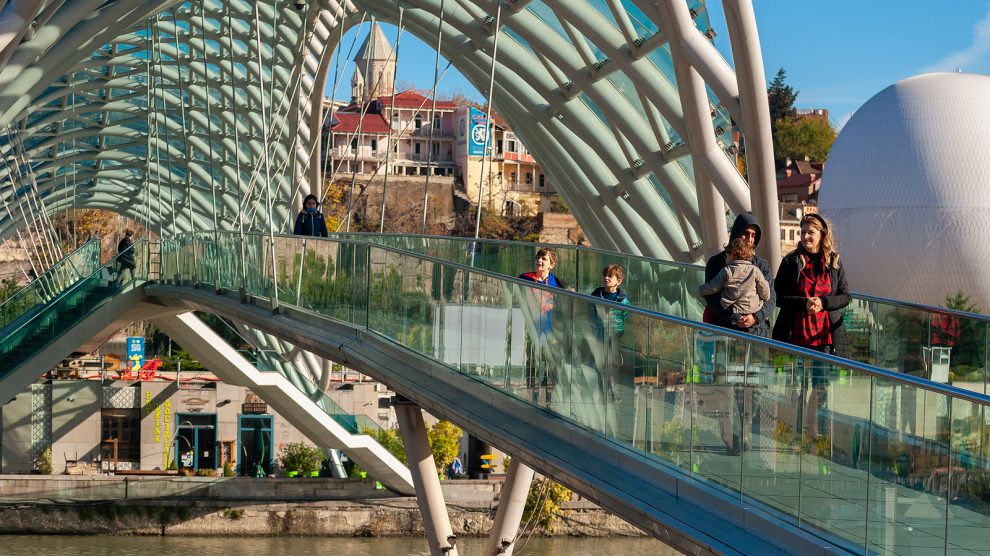 What was behind the Georgian government’s decision last month to turn down an EU loan?

Georgia’s government has pointed to a high level of economic growth and a willingness to cut down foreign debt for its refusal late last month of a second tranche of macro-financial assistance from the European Union.

The financial aid, a loan of 150 million euros, was offered to Georgia in 2020 with the aim of helping the Eastern Partnership country manage the Covid-19 pandemic.

The first half of the loan was disbursed in 2020, with the rest set to be received by Georgia this month – after the country had fulfilled certain political obligations, including a series of judicial reforms as recommended by the Council of Europe’s Venice Commission.

Georgia’s economy was severely hit by the Covid-19 pandemic, contracting 6.2 per cent in 2020 with key sectors, particularly tourism, grinding to a halt.

Nevertheless, the recovery has been strong. In the first seven months of 2021, the economy has bounced back sharply, with growth – at least according to preliminary data – reaching 12.2 per cent.

With local elections due in less than a month, the ruling Georgian Dream party has made the economic recovery a key part of its campaign.

On August 17, Prime Minister Irakli Gharibashvili said that the Georgian economy was “flourishing” and had the opportunity to become “the Luxembourg of the East”.

The government has claimed that the main reason it declined the second tranche of the EU loan was due to this rapid growth of the economy.

Another argument is the party’s aim to decrease Georgia’s foreign debt, which reached an all-time high of eight billion US dollars in 2020.

“It must be remembered that a loan is not a grant and any loan should be repaid with interest,” says Vladimer Papava, a senior fellow at the Georgian Foundation of Strategic and International Studies.

“By itself, a loan of 75 million euros is not an amount that can create difficulties in servicing and returning it. But it should be remembered that Georgia’s external debt in 2020 amounted to 129.6 per cent of nominal GDP, and total government debt 62.4 per cent. All these difficulties should be taken into account when the question arises of the expediency of receiving the new credit, or next tranche, which will increase the already high level of Georgia’s public debt.”

Is there more to it?

Some analysts have suggested however that turning down to the EU money was not purely about economics.

“The EU had serious issues with reform of the Georgian judiciary, which was a condition for receiving financial support,” says Nino Samkharadze, a junior policy analyst at the Georgian Institute of Politics. “As such, the EU would have most probably suspended the assistance. We could therefore suggest that the government wanted to avoid such a scenario ahead of the [local] elections.”

Even though its economy has seen an impressive rebound, Georgia’s fight against the Covid-19 pandemic has largely been reliant on foreign support.

Georgia currently has more per capita Covid-19 cases and deaths than any country in the world, and foreign assistance remains as crucial for the country as ever.

Furthermore, the pandemic has further exacerbated social problems, and unemployment rate has skyrocketed.

According to the Georgian Statistics Office, unemployment has reached over 22 per cent, compared to 17.5 per cent in 2019.

“Considering the fact that the Georgian government is facing a particularly difficult period of fighting against the Covid-19 pandemic, which is shown by the high rate of mortality, the ruling party’s argument that the EU loan is not necessary is unconvincing,” Samkharadze tells Emerging Europe.

Some analysts, however, including Papava, disagree.

“The Georgian economy is on the rise,” he tells Emerging Europe. “Also, refusal does not mean cancellation. It means that at this stage Georgia does not need to take the second tranche, but it will still be available in the future if it needs it.”

Should it at some stage require the money, Georgia will also need to meet its obligations to the EU.

The 150 million euros loan was originally part of a Covid-19 relief package, which later became part of an EU-brokered agreement between Georgian Dream and the country’s opposition.

Under the terms of the deal, the government was supposed to implement a number of reforms, and agreed to hold new national elections if the ruling party obtained fewer than 43 per cent of the votes in the local elections.

In return, the opposition agreed to take its seats in parliament, which it had boycotted in the aftermath of 2020’s parliamentary elections, which it claims were “rigged” – this despite the Organisation for Security and Co-operation in Europe (OSCE) concluding that the elections were “competitive and administered efficiently despite the challenges posed by the Covid-19 pandemic”.

At the end of July however, Georgian Dream exited the EU-mediated deal. A month later it turned down the second tranche of the money, Gharibashvili thanking the EU “for all its help” but underlining that the assistance was “not a grant but a loan”.

Following the government’s decision, the EU issued a statement confirming that the Georgian government was not, in fact, eligible for the second tranche as it had “failed to sufficiently address the condition for this macro-financial assistance, and notably, to increase the independence, accountability and quality of the judicial system”.

A leading member of the European Parliament on EU-Georgia relations, Viola von Cramon-Taubadel, said that the Georgian government could not decline what it was “not eligible for”.

‘This will not spoil Georgia-EU relations’

While some feel that the decision to back out of the EU-mediated agreement that helped solve the political crisis could undermine the Georgian government’s position as a reliable partner for the West, as well as its future prospects of EU membership, the ruling party has claimed that it “should not be interpreted as Georgia changing its foreign policy course and diverging from its EU integration path”.

However, many civil society representatives and experts argue that the refusal of the loan was another political move that could further endanger the relationship between the EU and Georgia.

Samkharadze says that the government’s decision threatens Georgia’s image of an emerging democracy loyal to the conditionality principle.

“In the long run, it could become a factor with regard to future EU financial projects,” she says. “In a broader context, the ruling party’s vision of democratisation is beginning to conflict with EU values, and the refusal of the EU’s financial support could be seen as evidence for that.”

Vladimer Papava meanwhile says that the refusal of the money will not spoil EU-Georgia relations.

“At the same time, however, Brussels should officially send to the Georgian government its specific comments (if there are any) as to which principles of the agreement were not fulfilled. This will help Tbilisi to concentrate on continuing the reforms.”