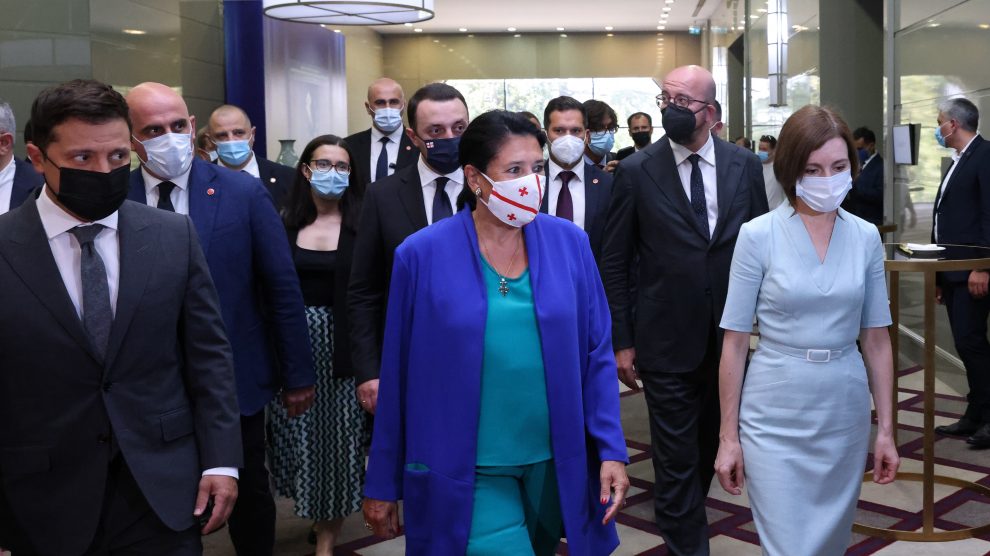 The strategic relationship between Georgia and Ukraine – strained for years – has shown some signs of revival, but much of the progress is little more than symbolic.

Georgia and Ukraine’s common history and challenges have largely created a broad and firm basis for a special relationship between the two former Soviet countries.

After the dissolution of the Soviet Union, the two countries bonded over efforts to reform their economies and governments. The two soon became founders of a regional consultative forum that later became the Organisation for Democracy and Economic Development, better known by the acronym GUAM.

After the 2003 Rose and 2004 Orange revolutions, Georgia and Ukraine abandoned their former Soviet trajectories and started to actively pursue the path of democratic transition and integration in western institutions.

The affinity between the governments of the two countries grew even more due to their similar relations with the Kremlin. Both became victims of Russian aggression as their internationally-recognised territories were occupied or annexed by their common neighbour.

As such, the strategic partnership between Tbilisi and Kyiv rested not only on trade relations but on security and their mutual aspirations towards EU and NATO integration. Their shared commitment was seen as an opportunity to push their integration into western institutions.

“A joint effort between Georgia and Ukraine with regard to European and Euro-Atlantic aspirations would be more successful than in isolation from one another,” says Giorgi Badridze, a senior fellow of the Georgian Foundation for Strategic and International Studies.

“These two countries are important to one another and their cooperation is going to make a difference if they are to be successful both in the restoration of their territorial integrity and Euro-Atlantic integration.”

The relationship between Kyiv and Tbilisi has been strained twice in the recent past however, and both times was largely because of Georgia’s former president, Mikheil Saakashvili.

In 2013, Saakashvili fled to Ukraine to avoid criminal charges brought against him in Georgia, which he claimed were politically motivated. He was sentenced in absentia to three and six years in prison respectively for issuing pardons in exchange for the silence of high-ranking police officers convicted of the kidnapping and death of banker Sandro Girgvliani in January 2006, and for organising the 2005 beating of an opponent, MP and businessman Valery Gelashvili.

Saakashvili became a Ukrainian citizen in 2015 after accepting an offer from an old university friend and then Ukrainian president, Petro Poroshenko, to help speed up reforms in the country. He was appointed as regional governor of the strategically important Black Sea region of Odesa.

The pair’s relationship quickly soured, however, and Saakashvili resigned as Odesa governor, blaming Poroshenko for enabling corruption in Odesa and in Ukraine as a whole.

Saakashvili then declared that he intended to set up an opposition movement in Ukraine. He was quickly stripped of his Ukrainian passport and left stateless.

Despite serving as a state official in Ukraine, Saakashvili continued to be actively involved in Georgian politics and remained the leader of the United Nationalist Movement, the largest opposition party. From abroad he has been a permanent thorn in the side of the ruling Georgian Dream party and its leaders, who in turn frequently emphasise that as a Ukrainian citizen, Saakashvili has no right to interfere in Georgian politics.

In May 2020, Georgia decided to recall its ambassador to Kyiv as a response to Saakashvili’s appointment. As a Georgian Foreign Ministry statement stated at the time, “the appointment of a man who was convicted in Georgia and is wanted by Georgian law enforcement by a strategic partner raises questions. That is why with the involvement of the ambassador, we should figure out what should be done in this situation.”

Georgian Dream has since claimed that Saakashvili was a major factor in the deterioration of the relationship between Georgia and Ukraine.

However, after former Ukrainian President Petro Poroshenko stripped Saakashvili of his Ukrainian citizenship in 2017 and deported him to Poland, the relationship between Tbilisi and Kyiv did not recover in any significant way.

The Georgian government even failed to officially welcome and support the Ukrainian Orthodox Church, which was granted autocephaly (independence) in January 2019 in a historic split from the Russian Orthodox Church.

“The only thing it takes to check the credibility of such things is to check the chronology. Saakashvili became a negative factor after bilateral relations had already been downgraded significantly as a result of the deliberate policies of Georgian Dream. The Georgian government distanced themselves from Ukraine during and after the Maidan revolution and this was the reflection of its policy of not wanting to irritate Russia”, he explains.

After taking office in 2012, Georgian Dream tried to establish peaceful relations with Russia and to “preserve the communication channel” through direct bilateral dialogue as the two countries had had no diplomatic or inter-state relations since a 2008 war between the two countries.

The Georgian Dream government has openly blamed the previous executive, led by Saakashvili, for “provoking” the war. On August 8, on the 13th anniversary of the war’s outbreak, Georgian Prime Minister Irakli Garibashvili said that the war was “the political responsibility of the previous government” and “anti-state provocation” and underlined that Georgian Dream had successfully managed to avoid “difficulties through coherent and peaceful foreign policy”.

Nevertheless, the relationship between Tbilisi and Kyiv has seen some improvement of late.

In April, Georgian Ambassador to Ukraine Teimuraz Sharashenidze returned to Kyiv, in a sign of Georgia’s support for Ukraine in light of increased Russian aggression in the region. The two countries joint aspirations towards EU membership might have played an important role in the decision as, a month later, Georgia – along with Ukraine and Moldova – signed a memorandum of understanding on establishing enhanced cooperation on European integration – the “Association Trio”.

However, when during his visit Zelensky visited the Georgia’s border with the Russian-occupied breakaway territory of Abkhazia, no high-ranking Georgian official accompanied him.

Moreover, Georgia was absent from a joint statement signed by various European states opposing the Nord Stream 2 pipeline and showing support for Ukrainian sovereignty, endangered by the project.

This shows that despite some progress, bilateral relations still lack solid substance.

According to Badridze, these events represent certain symbolic progress “which is much better than years and years without any high-level contact”.

“But I emphasise that the improvement of the relationship is sadly only happening at a symbolic level. No practical cooperation has been developed in the recent period.

“Logically, the two countries – both victims of Russian aggression – should be actively cooperating in the areas of security and defence. But they are not.”

Searching for peace in post-war Armenia: Elsewhere in emerging Europe
Bulgaria heads for yet another election: Emerging Europe this week
Comment