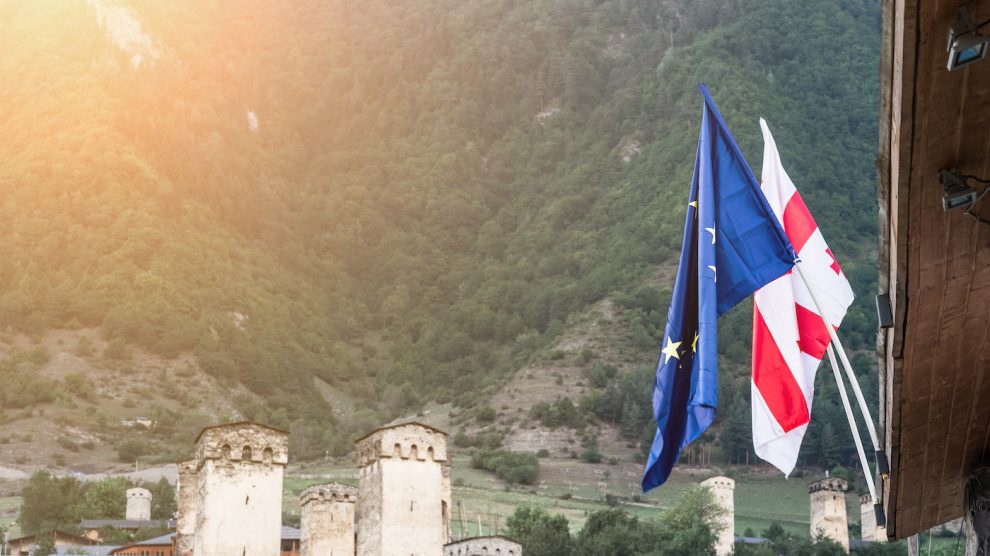 On July 5, Georgian LGBT+ advocacy organisation Tbilisi Pride organised the first-ever ‘March for Dignity.’ But, in fact, the march never happened. Before it even started, groups of violent radical counter-protesters went on a rampage.

Dozens of journalists, deemed ‘representatives of the liberal west,’ were attacked. One of them, Aleksandre Lashkarava (TV Pirveli), was found dead in his home several days after being badly beaten. The mob attacked anybody they considered their enemy: a Polish tourist was also caught in the fracas allegedly for wearing an ear piercing.

The headquarters of Tbilisi Pride was ransacked, as were the offices of Shame Movement, another LGBT advocacy organisation. In an ultimate symbolic move, rioters lowered and destroyed a European Union flag flying in front of the country’s parliament.

“What happened in the streets of Tbilisi on July 5 was the most violent civil attack we’ve ever witnessed since the 1990s civil war,” Giorgi Kikonishvili, a co-founder and a board member of the Equality Movement, tells Emerging Europe.

Orchestrated by the Kremlin

“These groups who organised the pogrom are actually targeting not only LGBT people, but they use this matter to undermine the whole idea of liberal-minded people and the idea of Europe and the West. So, it’s more like pro-Russian forces mobilising against European integration and progressive ideas,” Giorgi Tabagari, director of Tbilisi Pride, told Foreign Policy.

“Those groups and their leaders are directly and publicly funded by the Russian authorities, Moscow-based organisations, businessmen and ideologists supported by the Kremlin. Alexander Dugin, a famous Kremlin ideologist, a close friend of Levan Vasadze, a Moscow-based Georgian businessman who officially handles and organises hate groups that use homophobia and sexism as a tool for mobilising crowds, propose LGBT and feminist narratives as a ‘deviation’ which ‘comes from the West,'” says Kikonishvili.

Laura Luciani from Open Democracy argues that in Georgia and in Ukraine, there is also a tendency among local media and liberal civil society to discard anti-LGBT groups as Kremlin provocateurs or pro-Russian, thus externalising responsibility. “This strategy aims to avoid shedding a negative light on the country and its European aspirations. What this discourse ignores, however, is a systematic condemnation of far-right violence and a comprehensive engagement with its root causes,” she wrote.

“As for the pro-Russian sentiments in Georgian society, if we look at the numbers again, the political party, Alliance of Patriots, whose electoral base totally consists of such groups, took some 4-5 per cent in the last two Parliamentary elections. The other party, the so-called Georgian Idea, ruled by the most prominent homophobic activist Guram Palavandishvili took 0.1 per cent. Yet again, a real threat is not their existence, but the clear fact that Georgian government and the ruling party is in a very, very dangerous alliance with them,” says Kikonishvili.

In a letter addressed to the minister of internal affairs, the EU Delegation to Georgia, together with over 20 other EU Embassies, said the events “cast a shadow over EU-Georgia relations and Georgia’s image as a country upholding basic human rights.”

Article 2 of the Treaty on European Union (TEU) lists the EU’s founding values — ‘human dignity, freedom, democracy, equality, the rule of law and respect for human rights, including the rights of persons belonging to minorities.”

“We regret that the authorities did not call publicly for the protection of those peacefully marking Pride events, take other necessary actions to prevent or deter hate-driven speech or, in the end, provide sufficient protection as violent acts against activists and journalists were carried out,” EU Ambassadors said in the statement.

Prime Minister Irakli Gharibashvili doesn’t seem to notice the issue. In a briefing, following the pogrom, he said: “I know only one parade, and it is the parade of our army. […] When 95 per cent of the population are against conducting a propagandist parade, we should obey this.”

A week later, on July 19, the prime minister opened the Batumi International Conference — Georgia’s European Way and stated that the implementation of the Association Agreement (AA) remains at the top of the Georgian government’s agenda.

“We are diligently continuing our reforms aimed at stronger democratic institutions, legal approximation, and regulatory convergence with the EU. It is essential that we create more policy linkages and common areas with the EU,” he said and added that the Georgian government had “made an ambitious pledge to prepare Georgia for filing an EU membership application in 2024.”

PM @GharibashviliGe still reiterates that @GovernmentGeo prepares for the EU membership application for 2024.

This man clearly has no clue what the #EU values are! After #TbilisiPogrom and his shameful statements, the only application that he should be making is – Resignation!

“Determined progress in consolidating the rule of law through political and judicial reforms is of particular importance. Judicial reform is a core part of the 19 April Agreement and a condition the disbursement of EU macro-financial assistance to Georgia. The recent fast-track confirmation of Supreme Court judges did not fully reflect the results of consultations with international and domestic stakeholders. This was clearly a missed opportunity,” Charles Michel, president of the European Council, said in a statement after the Batumi conference.

For almost two decades, Georgia has pursued an openly pro-European policy, explicitly stating its intentions to join NATO and the European Union. The substantial steps Georgia made in combating corruption during the 2000s were widely held up as a significant indicator of the country’s commitment to aligning itself with the norms and values of the west. These aspirations have garnered widespread praise and sympathy. The country was seen as a ‘beacon of democracy’ in the post-Soviet world, with a robust free press and a business-friendly environment.

However, that seems to be the past. In the recent Economist Intelligence Unit’s annual Democracy Index, Georgia ranks 19th across the emerging Europe region, ahead of only Bosnia and Herzegovina, Azerbaijan and Belarus, and is labelled a ‘hybrid regime.’

In February, Niki Melia, one of the leaders of the largest opposition party, the United National Movement (UNM), was arrested, having failed to post bail on charges of organising “violent mass protests” during demonstrations against the Georgian government in 2019.

In May, that bail worth 40,000 Georgian lari (9,600 euro at the time) was paid by the EU Delegation to Georgia in order “to end the political crisis” in the country.

For foreign investors, the recent political instability has been viewed as confirmation that Georgia’s reputation as a great place in which to do business is not, perhaps, as well-founded as the World Bank’s Doing Business ranking, where Georgia ranks seventh globally would suggest.

The Equality Movement’s Kikonishvili has a clear opinion about the government agenda. [They] “paved a way to state-sanctioned violence as we have never seen since the 1990s. Their message is clear — be quiet, or otherwise, you’ll be beaten or even killed. It’s a dangerous symbiosis of oligarchic, autocratic and clerical terror,” he says.

Despite that, according to a poll by the National Democratic Institute (NDI), 82 per cent of Georgians approve of joining the EU. In comparison, 74 per cent of those surveyed approve of the Georgian government’s stated goal of joining NATO.

The fact remains that Georgia is a highly conservative country. The Orthodox Church is embedded within the country’s long-standing identity. And unlike some of the Orthodox majority nations in the EU, Georgia, owing to its geographic location and historical circumstances, has been quite far removed from the development of what are deemed to be European values.

Kikonishvili doesn’t think there is a strong correlation between being a conservative, even homophobic Christian and being anti-Western or anti-EU at the same time.

“Surprisingly, even the people with the most conservative values are pro EU, and they clearly see Georgia’s geopolitical future in Europe. If there’s a number of people who are alienated from the EU, and there is, of course, it’s not because of cultural views only. Still, I think mostly because Georgia’s European aspirations haven’t yet translated into what Europe, as a social system, really means and why we actually want to be part of it. So, the question here is: Why do we need to be part of the EU at all. A well-balanced social, economic and political system based on the goal of social welfare, equality, and cultural liberty for all — that’s what makes Europe a fascinating place to live in, to be part of,” he tells Emerging Europe.

The events of July 5 can be considered a flashpoint of already-existing tensions within Georgian society. How the country balances its European path, supported by the majority of the population, with its own conservative values, will be one of the defining processes of Georgian politics in the coming years.