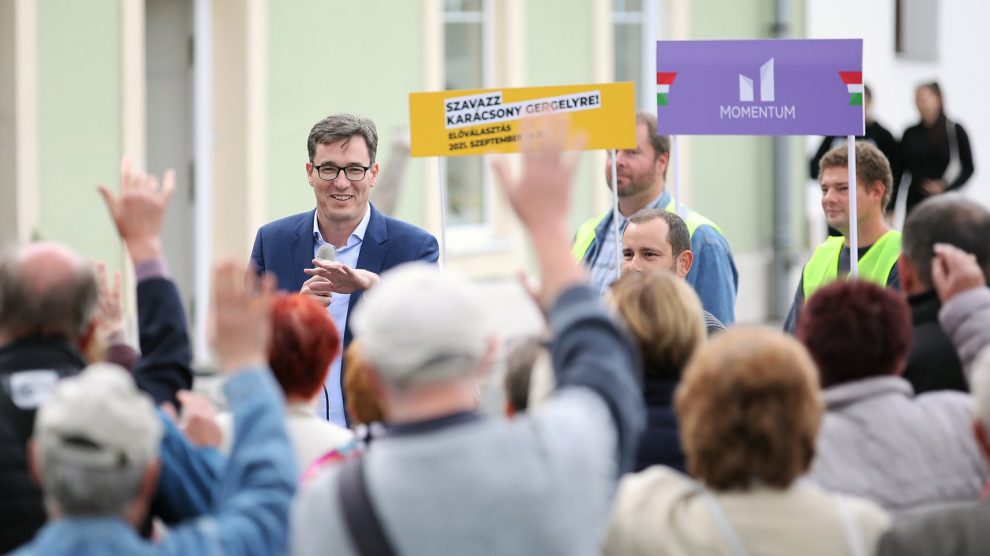 Hungary’s opposition parties will on October 10 choose a single challenger to take on Viktor Orbán in next year’s parliamentary elections.

Last month, six Hungarian opposition parties from across the political spectrum, from the social-liberal Democratic Coalition to the formerly far-right Jobbik, held a series of primary elections in order to choose the candidates who will take on the country’s long-serving and increasingly autocratic prime minister Viktor Orbán and his Fidesz party.

While candidates are being selected for all of Hungary’s 106 single-member, first-past-the-post electoral districts, the most important primary is that which will decide the opposition’s alternative to Orbán.

After the first round of voting in late September, three opposition figures remain in the race: Klara Dobrev of the Democratic Coalition; Gergely Karácsony – mayor of Budapest and leader of Dialogue for Hungary; and independent candidate Péter Márki-Zay.

It was a result which spoilt somewhat the Fidesz narrative that the primaries were “fake theatre” designed to ensure that Karácsony would win, says Edit Zgut, a lecturer at the University of Warsaw and expert in Hungarian politics.

“So far, the primaries have proven to be a real mobilising asset for the united opposition,” she says.

Ágoston Sámuel Mráz, CEO of the Nézőpont Institute, a Budapest-based research organisation, says that it is still to early however to decide if the primaries have been a force for good in Hungary.

“The problem with primaries is that loyal voters decide which candidates everybody can vote for, and among potential opposition voters there are plenty who are unhappy with some older opposition figures, not least former prime minister [Ferenc] Gyurcsány.”

Nevertheless, Gergely Rajnai, an analyst with the Centre for Fair Political Analysis, says that the innovation of primaries certainly offers hope for an opposition victory next year.

“While there are a lot of ideological differences among the various parties, these have become less and less pronounced over the last decade, and the main question in Hungarian politics now is simply whether or not you support Orbán,” he says.

Where all analysts agree is on the principle that only a united opposition can prevent Fidesz from winning yet another term in office.

Gabor Gyori, an analyst at Policy Solutions, a think tank, says that Hungary’s election system has forced the opposition’s hand.

“Although to be fair, even before Fidesz changed it, the system heavily favoured larger parties,” he tells Emerging Europe.

The changes made by Orbán and Fidesz were twofold. Firstly, the total number of seats in parliament was reduced to 199. Secondly, the majority of seats now come from single-member districts — 106. The remaining 93 are based on proportional representation.

“Even more importantly, Fidesz abolished run-offs, so there is no second round in Hungary anymore — it’s a one round election, winner takes all,” Gyori says.

These changes are what has allowed Fidesz to retain its supermajority in parliament. In both 2014 and 2018, Fidesz took two-thirds of seats despite its share of the popular vote decreasing from 53 per cent to 44 per cent.

In the second round of the primary election, set to begin on October 10, Hungarian voters will get to choose from two options — a Karácsony and Márki-Zay joint ticket, or Dobrev.

“This Hungarian primary was not a contest but a symbolic procedure of unification,” says Mráz.

But that is not to say that Karácsony and Dobrev do not differ in their approach.

“Karácsony has a more conciliatory approach. He wants to make compromises, while Dobrev offers a more radical stance, promising swift retaliation for any harmful steps the Orbán government has taken. But the primary is mostly about the clash of these styles, not a clash of different ideologies,” says Rajnai of the Centre for Fair Political Analysis.

The actual parliamentary election is set to be held sometime in 2022, and it’s still too early to predict a winner.

Polls show that both the Orbán camp and the united opposition have a shot of winning. A September poll by the IDEA Institute put support for Fidesz at 49 per cent, and 45 for the opposition. A more recent poll by Závecz Research finds the two neck and neck at 49 per cent.

What’s certain is that for the first time in a decade, the opposition has a real chance of winning.

“The opposition is better placed than ever before,” concludes Gyori.