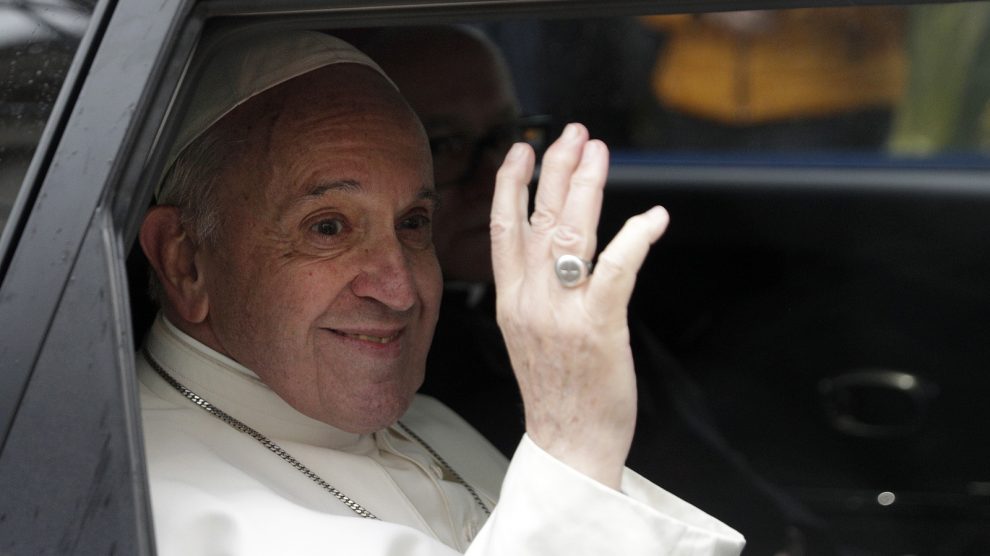 Pope Francis will arrive in Budapest on September 12, the first leg of a short tour of Hungary and Slovakia. But he’s only staying a few hours.

For weeks the main concern for Hungarians ahead of a visit by Pope Francis to the country on September 12 has been whether or not the pontiff will meet Prime Minister Viktor Orbán, says Zoltán Kmetty, researcher and professor of sociology at the Eötvös Loránd University in Budapest.

Francis will, it turns out, meet Orbán, as well as President János Áder, several Hungarian Catholic bishops, and representatives ecumenical Christian and Jewish communities before celebrating mass to mark the end of the International Eucharistic Congress, which began in Hungarian capital last week.

However, the stark ideological differences between Hungary’s right-wing leader and the most liberal pope in history have, some suggest, led to the length of the visit being kept extremely short: Francis is expected to spend just seven hours in Budapest before heading to Slovakia for a much longer, three-day visit.

“Media coverage of the Eucharistic Conference and the upcoming visit of Pope Francis has so far been relatively low in Hungary,” explains Kmetty. “Moreover, the news reports that have been published often emphasise the inconvenience caused by the conference. For example, students could not move into dormitories because their beds have been rented out to visitors attending the congress.”

Nonetheless, some reports estimate as many as 75,000 people will attend the mass, which the pope has long outlined as the main reason for his visit to Hungary.

“Catholics are glad about the event taking place and the pope himself joining in is a special gesture,” Schanda Balázs of the Pázmány Péter Catholic University in Budapest tells Emerging Europe.

While high attendance is to be expected – Catholics represent the largest religious group in Hungary – Kmetty says that “the ecclesiastical narrative of the event has not made it into public discourse at all”.

“This also highlights the long-standing communication problems of the churches in Hungary,” he says. “As church actors very rarely speak out on public issues, the church narrative is not present in public discourse, and there is a lack of high-reach channels to amplify the voice of the churches. Therefore, churches partly use their own media with limited access to the broader public or adopt political narratives to reach a general audience.”

Will Slovakia be any different?

During his three days stay in Slovakia, the pope’s agenda includes meetings with President Zuzana Čaputová, civil servants and diplomats at the Presidential Palace in Bratislava, Christian figures at the Cathedral of Saint Martin in Bratislava, and members of the Slovak Jewish and Roma communities,

On September 15, the final day of the visit, Holy Mass is to be held at a Marian shrine in Šaštin.

In Slovakia, it’s not politics that is the issue, but Covid-19.

“The visit of the pope is of course taken responsibly by the Church and state, but growing numbers of Covid-19 infections is an issue,” Juraj Majo, a researcher at the Comenius University in Bratislava, tells Emerging Europe.

“The rules for attendance at the masses in which the pope will take part have been loosened after it was determined that the number of people to have registered for them was low. While originally only the fully vaccinated were to be allowed to attend, now those who can produce a negative test, or a certificate of having recovered from Covid-19 will also be allowed.”

While Majo believes that fears surrounding the pandemic are the main reason for the relative lack of interest in the pope’s visit, he also points to another reason: a lack of emotional attachment.

“In my opinion, many devout Slovak Catholics still have a strong emotional attachment to the former pope John Paul II, who as a Pole had a very warm relationship with Slovaks. Pope Francis has a more remote cultural background.”

Majo also says that most Slovak Catholics do not generally agree with the current pope’s stance towards refugees or LGBT+ issues.

“However, I do not see much vocal disagreement and protest against him so far,” adds Majo, indicating that the visit will most likely go forward as planned despite the initially low interest.

“Most Catholics will show at least essential respect towards him, for he is the head of the church,” Majo concludes.