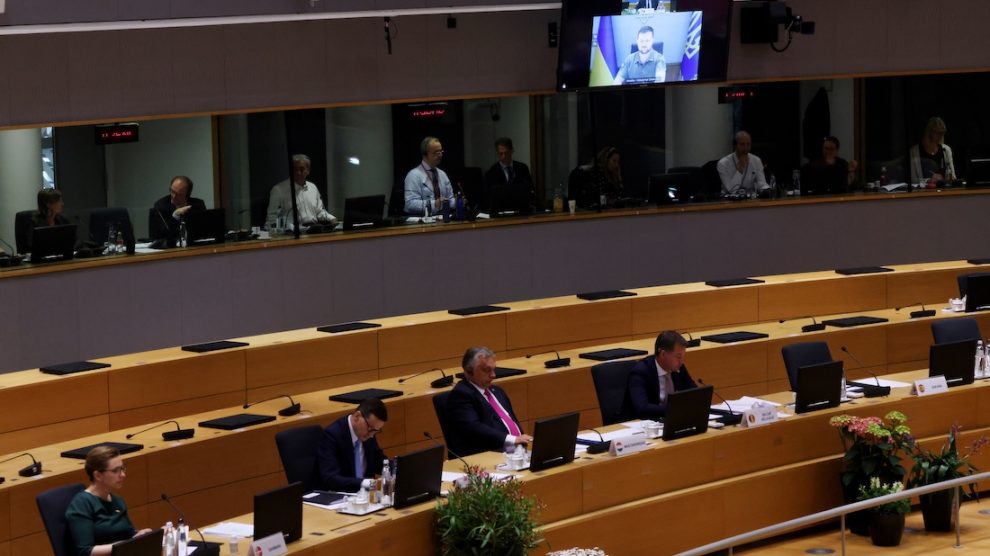 Czechia, Hungary and Slovakia will get to keep their Russian oil supplies for the immediate future despite an EU-wide embargo.

More than three weeks after the EU proposed a complete ban on Russian oil imports by the end of this year as part of a sixth round of economic sanctions, leaders gathered at a special European Council meeting on May 30 finally agreed to a watered down embargo that allows a “temporary” exemption for Czechia, Hungary and Slovakia, but only for crude delivered via the Druzhba pipeline, which passes through Ukraine.

The embargo, as originally proposed, would have cut off one of Russia’s major revenue streams helping to finance its war on Ukraine. Around half of Russia’s 4.7 million barrels per day of crude exports go to EU member states.

In allowing exports through the Druzhba pipeline to continue, around 750,000 barrels of crude each day will still be able to make their way to the EU.

Earlier in the day Ukraine’s president, Volodymyr Zelensky, had addressed the council, saying that he was angered by the delay in EU leaders imposing heavier sanctions against Vladimir Putin.

“The pause in agreeing new sanctions in Europe has been too long,” he said. “A lot of time has passed without strengthening European sanctions against Russia.”

Commission President Ursula Von der Leyen meanwhile called the agreement “an important step forward” and said the bloc had also agreed a “massive investment in renewable energy” in order to compensate for the diversifying away from Russian oil.

Ever since the embargo was first mooted, it faced fierce opposition from some EU members, particularly Hungary, which had sought an exemption for crude coming through pipelines.

Budapest, which is heavily dependent on Russian oil, has said it needs five years and billions of euros of investment to upgrade its refineries.

Viktor Orbán, Hungary’s prime minister, also secured measures to ensure that Budapest could still obtain Russian oil from other sources if there was an “accident” with Druzhba.

“We have managed to defeat the Commission’s proposal to ban the use of oil from Russia in Hungary,” said Orbán.

The prior failure to agree on the oil embargo had affected other measures included in the sixth sanctions package, such as further restrictions on Sberbank and other Russian banks, asset freezes on Russian officials, and a ban on the insurance and reinsurance of Russian ships by EU companies.

Following the oil deal, these can all now be implemented.

Environmental group Greenpeace has criticised the partial embargo, its EU climate and energy campaigner Silvia Pastorelli saying that, “a partial ban on Russian oil is not a ban and it’s unacceptable that money from EU countries is even partially funding this brutal war. This is no time for half measures – if the EU can’t announce an end to all imports of Russian oil, leaders must find other ways to stem the flow of cash to Putin by immediately cutting demand in the oil-guzzling transport sector.”

Half measures or not, with the oil embargo now in place, attention is likely to turn to Russian gas imports.

On May 17 the Commission announced that Europe can end its reliance on Russian gas by 2027, although gas is unlikely to form part of any seventh round of sanctions.

Nevertheless, the EU has cut the amount of gas it buys from Moscow.

Part of the drop has been caused by Gazprom, the Russian state-owned energy company, halting supplies to Bulgaria, Finland and Poland for refusing to pay for gas in roubles. Denmark and The Netherlands are also expected to see their Russian gas supplies turned off this week for the same reason. Together, the five countries account for 16 per cent of the volumes that Russia was contracted to deliver to Europe at the start of the year.

Outside of the EU, however, Russia still has loyal clients for its gas.

On May 29, Serbia – a candidate for EU membership – agreed a new three-year gas supply contract with Russia in a phone call with Vladimir Putin.

Serbian President Aleksandar Vučić said that the deal had been secured on “extremely favourable” terms, and is likely to be signed during a visit by Russian Foreign Minister Sergey Lavrov to Belgrade in early June.

Serbia is almost entirely dependent on Russian gas, and its main energy companies are under Russian majority ownership.