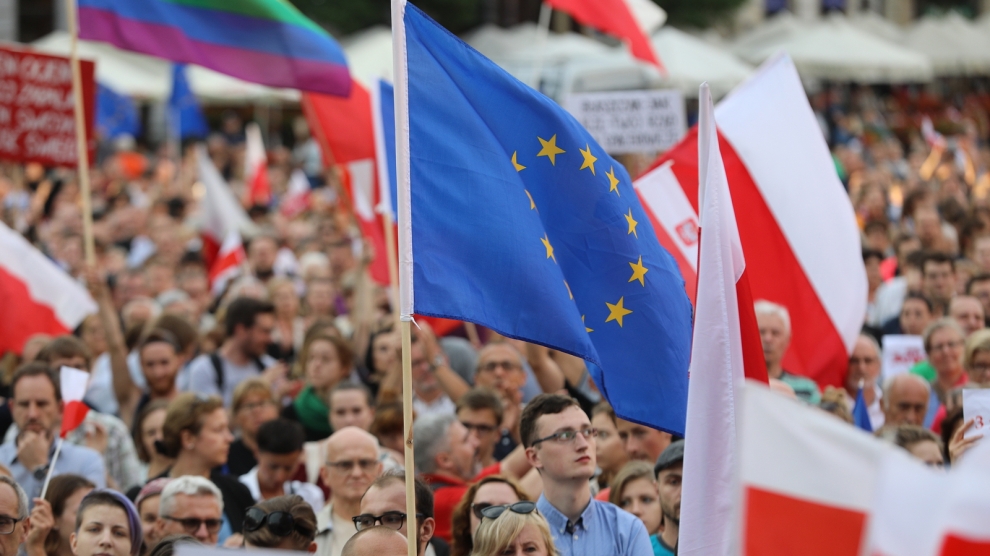 The European Union has taken the unprecedented step of triggering Article 7 of the European Treaty and moving towards sanctions against Poland in order to prevent authoritarianism taking hold in the member state.

“Despite repeated efforts, for almost two years, to engage the Polish authorities in a constructive dialogue in the context of the Rule of Law Framework, the Commission has today concluded that there is a clear risk of a serious breach of the rule of law in Poland,” the European Commission said in a statement.

“As guardians of the treaty, the Commission is under a strict responsibility to act … If the application of the rule of law is left completely to the individual member states, then the whole of the EU will suffer,” Frans Timmermans, the first vice-president of the European Commission, told reporters in Brussels, adding that the Commission was invoking the treaty clause “with a heavy heart.”

“I do not understand this decision,” said Andrzej Duda, Poland’s head of state. “It is clearly political and has nothing to do with merits,” the President said.

“The Commission’s announcement had no impact on my decision. I was only interested in the conditions I had made [in July] being fulfilled by parliament, and whether they had made any changes which I couldn’t approve,” the president said.

EU governments will now meet at the Council of the European Union to hear Poland out and ask it to address their concerns. But if 22 of the EU’s 28 countries and the European Parliament are not satisfied, the process will move on to the next stages, which may mean sanctions. Poland might be deprived of the right to vote and could suffer financial consequences. In the current EU budget, the country is the largest beneficiary of EU structural funds — 82.5 billion euros.

Konrad Szymański, the secretary of state for European Affairs, said that Article 7 is not a sanction-triggering procedure.

“It boils down to the European Council’s confirmation that some of the European Union’s values have been contravened. Public opinion is looking closely at the matter and I am positive that this situation is creating an unprecedented distrust in Poland for the integration process. Law and Justice is a part of the pro-European majority in Poland. This issue should become a concern of each and every European — in Warsaw and in Brussels correspondingly,” Minister Szymański told Onet.

He added that Hungary does not share the conviction that Poland’s reforms should be a matter that is tackled through a sanction procedure. “And this is not the only country that has distanced itself from the plans of the European Council,” Mr Szymański said.